Volleyball Falls to Top-Ranked Teams, Comes out of Tournament 1-2 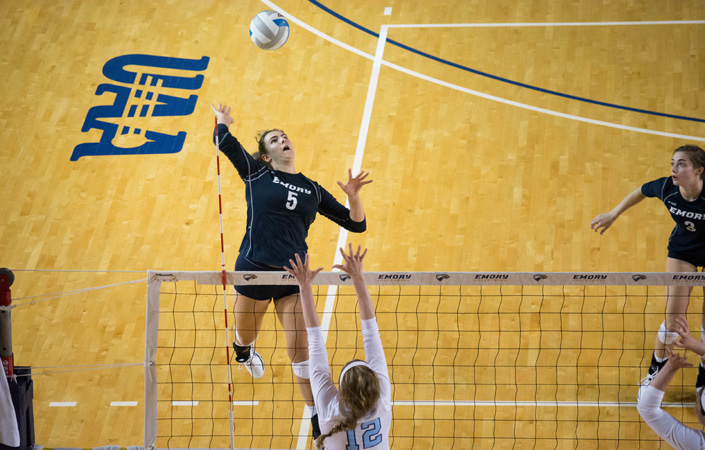 This past weekend, the Emory women’s volleyball team set out for Thousand Oaks, Calif. for the Cal Lutheran Fornia (Cal Lu Fornia) Invitational to face off against three opponents.

The Eagles won one of their three tournament matches. The team lost 3-1 against Claremont-Mudd-Scripps (CMS) (Calif.) and 3-0 to California Lutheran University. Their one victory in the tournament came in the second game, in which the team defeated Ohio Wesleyan University 3-2.

This weekend’s results followed a relatively stronger weekend when the Eagles won three of four games in the Emory Classic Sept. 2 and 3.

Cal Lutheran stands as the defending champions in the National Collegiate Athletic Association (NCAA) Division-III league, and both they and CMS played with very experienced teams, Head Coach Jenny McDowell explained. On the other hand, the Eagles are continuing to coalesce into a single unit.

The team is adjusting to the addition of many new players, like freshman outside hitter Sara Carr, who received ample playing time throughout the tournament.

Carr explained that having nine freshmen and only four upperclassmen has its pros and cons.

“You’re going to look at us in two or three years with so much experience,” Carr said. “But for right now it’s definitely a growing period.”

While the results of this weekend’s tournament might seem as if  the Eagles played worse volleyball than in their first four games of the season, McDowell says the opposite is actually the case.

“If you lose 3-0, people assume it wasn’t a close match, but we had the opportunity to win both,” McDowell said. “I’m actually super encouraged by the level of volleyball we played this weekend.”

Although the Eagles lost their two matches against Cal Lutheran and CMS, the games’ scores show that the Eagles did not go down without a strong battle.

In sets one and four of the match against CMS, the Eagles’ loss was only by a margin of four and two points, respectively. In the Cal Lutheran game, Emory lost by only two, three and five points in each set.

Emory fell from No. 4 to No. 6 in the country after their two losses in the invitational.

Despite this drop in ranking, McDowell said, “We played some of our best volleyball so far of the season. The best times are ahead for this team.”
The Eagles will face the University of Mary Washington (Va.) to kick off the Emory Invitational this Friday, Sept. 16, at 5 p.m. at the Woodruff Physical Education Center (WoodPEC).