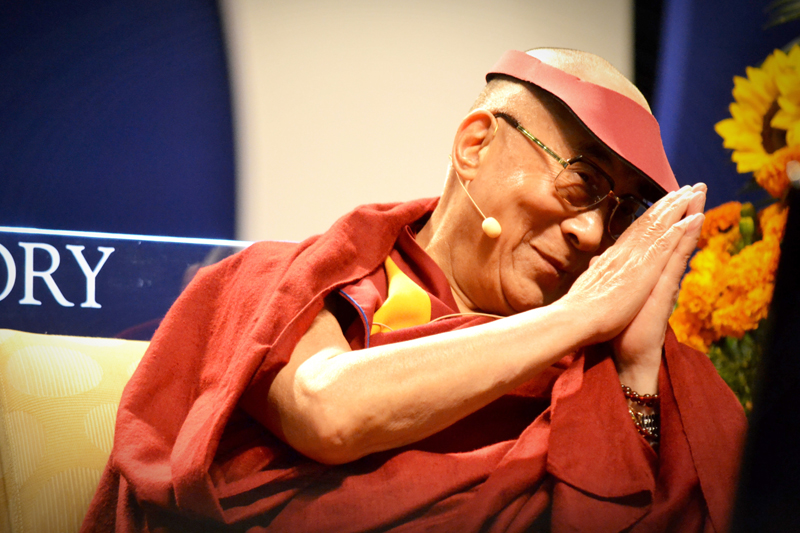 His Holiness the XIV Dalai Lama gave a Buddhist teaching Thursday to close out the three-day event as part of The Visit 2013 in a packed Glenn Memorial Auditorium yesterday morning.

The Dalai Lama’s teaching drew from the root text of the Mahamudra, or “Great Seal,” by the first Panchen Lama, Losang Chokyi Gyaltsen. The event was coordinated by Atlanta’s Tibetan Buddhist center, Drepung Loseling Monastery (DLM).

Monks from DLM began the morning with preliminary prayers and chants that aimed to purify the space and prepare for the teaching, according to Paran Pordell, DLM member and usher for the event.

After the Dalai Lama entered, the monks on stage began with a mandala offering, which symbolizes offering the universe and all things in existence, Pordell said.

Gary Hauk, vice president and deputy to the president, welcomed attendees to the morning’s proceedings and introduced the Dalai Lama.

The Dalai Lama spoke to the crowd in English for his opening remarks on spirituality and tradition, and switched into Tibetan for his teaching.

“I don’t want to make my interpreter jobless,” the Dalai Lama joked.

The topic of the morning’s teaching was based on several Buddhist texts, including the first Panchen Lama’s Mahamudra, works by Buddhist philosopher Nagarjuna and other anecdotal teachings.

The Dalai Lama spoke on the importance of the connection between the mind, body and soul.

“Wherever wisdom is present, the Buddha’s body is present,” he said. “To understand the nature of the mind is to guard against malpractice.”

The spiritual leader also touched on the concept of self, explaining that self is merely a label humanity ascribes as part of a “naÃ¯ve perspective.”

“Such an inner self cannot be independent of mind and body,” he said. “It is neither within nor outside our selves.”

In addition to the official program, audience members of Thursday’s event received a booklet with an English translation of the Mahamudra.

In the translation, the Dalai Lama highlighted several key verses, encouraging the audience to “set up the watch post of unwavering mindfulness.”

In order to break the cyclic nature of life, the Dalai Lama said we must practice in order to strive closer and closer to nirvana, or enlightenment.

Some Emory students and DLM members expressed amazement at the Dalai Lama and the message he presented.

“Seeing the Dalai Lama was truly a surreal experience,” College sophomore Emily Lance said. “It reminded me how fortunate I am to attend a university that can give me these opportunities.”

“To see the Dalai Lama speak is so rare,” Pordell said. “His teaching today is some of the best I’ve ever heard.”

The two hour and 45 minute teaching ended with a blessing of the monks and a cheerful quip from the Dalai Lama.

“Since I am a professor, I guess this is the part where I wave my hands and say ‘Done,'” the Dalai Lama said.