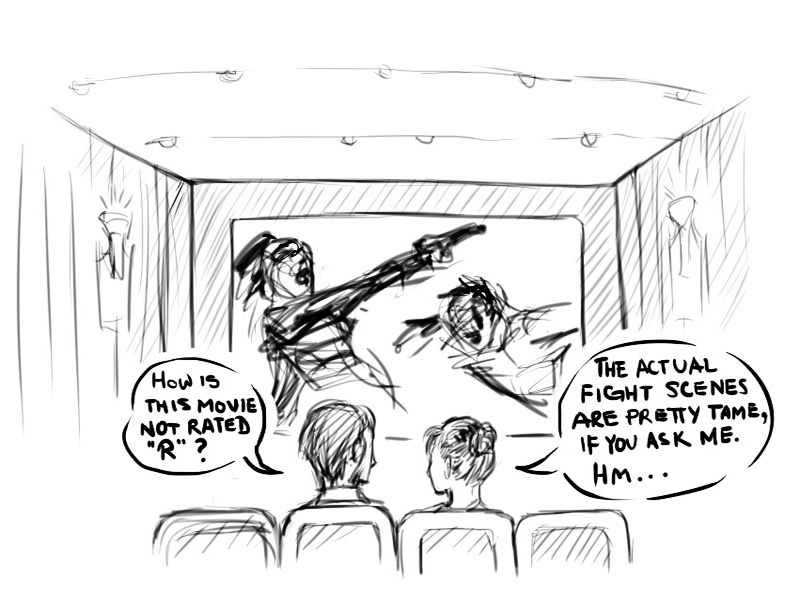 In the world of cinema, July and August have become established as key months for releasing films known as blockbusters or tent-poles.

Since the release of the celluloid phenomenon known as Star Wars in 1977, these summer films have become exhibitions of the latest advancements in film technology. However, as Hollywood studios become increasingly reliant on these films for annual profits (hence “tent-pole”), the pressure to make them lucrative ventures has dramatically increased. Concurrently, the tastes of the target audience (males 18-34) has grown towards highly-visceral action, frequently presented on screen as violence.

As technological advancements lead to more extravagant imagery, and audience demand errs towards violence, the question remains as to who bears responsibility for how film violence is digested. Many movie-goers consider this to be under the jurisdiction of the Motion Picture Association of America (MPAA) and its predominant rating system. But when a cinematic experience is boiled down to an interaction between an audience member and the film, the responsibility for processing undoubtedly lies with the adult individual, or in the case of a child, with a parent or guardian. The factors that contribute to an individual’s encounter with a film are so arbitrary that it would be unfair and unrealistic to assign responsibility to anyone other than the viewer.

In 2010, the film Kick-Ass, directed by Matthew Vaughn, garnered significant criticism from respected film writers for its violence. Reinforcing concern, the film became a commercial success and a sequel was released this past August.

Highly-respected critic Roger Ebert was one of the leading detractors from Kick-Ass‘s violence upon its release. In his review, he wrote, “The movie’s rated R, which means in this case that it’s doubly attractive to anyone under 17. I’m not too worried about the 16-year-olds here, I’m worried about the 6 year olds … This movie regards human beings like video-game targets. Kill one, and you score. They’re dead, you win. When kids in the range of this movie’s home video audience are shooting one another every day in America, that kind of stops being funny.”

Ebert provides heavy criticism about the effects of the movie on the thought processes of an immature audience, yet he doesn’t make a judgment as to whether the responsibility for this potentially-dangerous imagery lies with the presenter or the viewer. His acknowledgement of the R rating as an attractor for even younger audiences confirms that legislation is not a viable solution.

In the end, it comes down to how the viewer chooses to process what they have seen. The filmmaker is not to blame for misconceptions of on-screen violence. The misconception is an ailment that needs to be cured by the viewer or those responsible for him or her. Rather than suppressing or influencing the imagery, concerned peers would be much more effective if they took the time to counsel their fellow audience members and, most importantly, their children.

During the course of a film, the director makes explicit decisions in order to engulf the audience in a world of fiction. Audience members do not want to think about the fact that what they are actually seeing is a series of photographs of trained actors strung together in fluid mastery. However, once a film has concluded, it is the responsibility of audience members and their peers to take a step back and view the film as what it really is.

With a proper perspective on the world of fiction, misguided audience members are far more likely to leave the violence on screen and out of their lives. Ironically, how often do people show concern about violent documentaries? Although edited in a similar fashion to fiction films, documentaries yield an aura of clarity that lets the audience know that the violence shown is occurring in the same world as the movie theater they’re seated in.

The solution rests upon an able distinction between worlds of fact and fiction. Suppressing Hollywood violence does nothing to cure errors of interpretation. If you are concerned about a violent film, don’t ask the filmmakers why they made it, but rather ask the audience members how it made them feel.

Robert Weisblatt is a College junior from Belle Mead, N.J.