Vinyl Theatre is “Taking Off” in Music 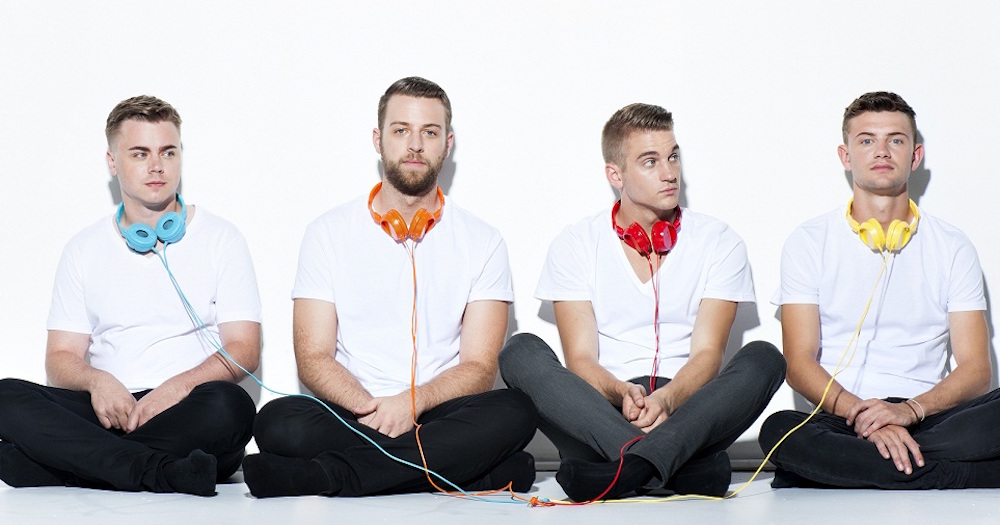 To be a part of record label Fueled by Ramen is to be on hallowed ground for any lover of punk inspired pop-rock, as it is home to artists like Panic! at The Disco, Paramore and twenty one pilots. The label’s recently signed and soon-to-be biggest band comes out of Milwaukee (WI) and goes by the name Vinyl Theatre. The four members, Keegan Calmes, Chris Senner, Josh Pothier and Nick Cesarz, make up this unique group and produce a truly special sound.

Vinyl Theatre, both in their music and personalities, don’t seem to fit into one box. Their music straddles the lines between multiple genres, and the group isn’t afraid to adopt components of various styles and combine them into one song. This ingenuity and their use of music-sharing websites like SoundCloud managed to catch the eye of record labels and fans alike.

In 2014, the band embarked on a whirlwind tour supporting twenty one pilots on the Quiet Is Violent Tour. And last year, they stopped by Emory’s campus, spoke with WMRE, Emory’s student-run radio station and played for Goizueta Business School students at the BBA Council’s Kegs event.

Vinyl Theatre will be performing with Finish Ticket at Terminal West on Feb. 19. The Wheel spoke with the band’s lead singer, Keegan Calmes, over the phone about the band’s beginnings, inspirations and touring.

Maya Nair: Many people found out about Vinyl Theatre because you opened for twenty one pilots. Can you tell us about that experience?

Keegan Calmes: It was pretty eye-opening [and] it was just so different, because we had never toured before, and Fueled by Ramen [had] picked us up out of the blue. It was a really [steep] learning curve that we had to get over [quickly]. But it was awesome, and we were coming into the game when twenty one pilots was just starting to really roll. The tour was amazing, and the whole thing [basically] sold out. Every night was a big crowd, and they were super receptive and their fans are super fantastic so that helped translate over for us. Now our fans are a lot like theirs. It really changed how we can tour now, because we have a really great fanbase now.

Ilana Berghash: Before getting signed to Fueled by Ramen, how did you get your name out there?

KC: Well, Milwaukee is kinda tough, especially the local scene — it’s tough to get out there and tough to break out. Most of what we were doing was online on SoundCloud, just putting our songs out there and seeing if anybody was into it. Some of them got fire, and it’s how we got Fueled By Ramen’s attention.

IB: How do you think social media and music-sharing websites, like SoundCloud, have impacted you as a band?

KC: I think we got a little bit lucky, because SoundCloud was somehow relevant at the time [for] a brief window of time. We put out the right songs that sounded different at the right time, and people heard them, somehow, at the right time.

With social media, it’s kind of hit or miss. All of a sudden, Facebook is dead and Instagram and Twitter are more relevant. Now Twitter is probably the best platform to reach out to the fans. And it’s always evolving, just like music is, just like people are. We’re always changing. That’s the hardest thing about social media — pinpointing what you want to say, when you want to say it and on what platform. A lot of it had to do with luck, but it’s about being savvy about what you post and when you post it and who you want to see it and exactly how you’re talking to your audience. Sometimes it comes off as pandering when you see some people talk to “fans” or maybe doing the whole “fake it ‘til you make it” thing. If you’re honest with everybody, I think that goes a long way on social media.

MN: I’ve heard you say that The Killer’s Hot Fuss had a significant impact on you as a songwriter and performer, but this influence can be viewed as a double-edged sword. Does getting compared to other bands or getting asked about your influences get tiring?

KC: Yeah, that’s a tough question to answer because if I say, “it gets tiring,” that’s almost like saying I don’t appreciate being compared to somebody I was influenced by or taking too much influence from and [that] I don’t want to recognize it anymore. Once again, even an answer is a double-edged sword. But, it is tough. If you do anything that looks like another band out there right now or if you do anything even [a little] similar, you’re gonna get those people who are online and have nothing better to do. They’re trolls, and they want to cut you out. Or at some point, your fans will be like, “Hey, that’s a little bit like this other band. Look at this, they did it first,” or something along those lines, but it’s okay. It really is. We really pull a lot of influence from current bands right now, and if we’re being compared to them, it’s [more] flattering than anything. It’s not really tiring.

MN: I saw the music video for “Gold” and found it to have a dystopian, Hunger Games feel. What was the inspiration for the video?

KC: It was kind of George Orwell’s 1984, Ayn Rand’s Anthem and a little bit of A Clockwork Orange. [Those are] the three different things that I wanted to incorporate in the video. But then, of course, we put our own spin on it. It was a tough concept to execute, but the video turned out great. I hope people like what we’ve put out there. People have interpreted it in so many ways, and I really appreciate that more than anything.

MN: You’ve posted a few covers of Catfish and the Bottlemen. What other artists are you listening to right now?

IB: “Breaking Up My Bones” has been featured on Alt Nation’s Alt 18 countdown and on Billboard’s Twitter Emerging Artists. What makes it stick out from your other songs?

KC: We wrote the song just to be weird; we didn’t want it to be a single. We weren’t signed at the time. We were just like, “Man, this sounds really weird.” It was just what I wanted to write at the moment. Sometimes you wake up with an idea in your head, and you try to put it down on paper, and it gets so mutated that it’s nothing like the beginning. That’s pretty much what happened. We had an idea, and it kept mutating out of our control, and we just kept going with it. We didn’t change it and try to conform to any formula or formulaic theory [about] how we’re supposed to make a single. It was totally just a weird, throw-off song with a progressive bridge. I guess what sets it apart is the fact that we weren’t really consciously trying to be anything other than some weird sounds.

MN: Your music is a blend of many different sounds and genres. Do you feel pressure to be put in a box or stick to one type of genre since you’ve been labeled a “rising indie band?”

KC: No, that doesn’t feel like it puts pressure on me. I think that the biggest thing right now is there’s pressure maybe from the label to be Vinyl Theatre, to be that sound, to continue on that sound when everything we’re writing right is nothing like Electrogram. It’s just a bit frustrating, because we’d rather write another “Breaking Up My Bones” and let our sound mutate and evolve one more time or a few more times. Everything we’re writing is different, and I don’t think we really sound like an indie band anymore with the new stuff, and I don’t mind that. It’s just hard, because there’s an expectation when you develop a fan base to produce for that fan base at least something similar to what you’ve already created, and that’s difficult for an artist.

IB: Have you started thinking about the next album and what kind of direction it will go in?

KC: Yeah, we have too many songs recorded, and we’ve picked the few that we’re going to fight for on the record. It’s going to sound a lot more organic and less perfect. On Electrogram, we spent a lot of time just making sure everything was very, very, very perfect all the time. I just want everything to feel organic and a bit more room sound; I want to feel like people are there. I want you to feel like you’re at the show ‘cause our live show is what we really pride ourselves on. If anything, it just feels real. It feels very, very real.

MN: You all have known each other since high school. Do think your individual creative processes or personalities influence each other?

KC: Definitely. There’s an ebb and flow. People get mad some days, people get upset, people are happy some days and other people aren’t. Just figuring out how to deal with a human’s emotions and then put it into a creative mind and work with that creative mind on the same day. It’s like the stars have to align. It’s not that they don’t, it’s just every day is a different experience with almost a different person.

IB: Outside of music, what do you enjoy doing, either together or individually?

KC: Well, I’m a big runner; I like to run a lot. I did just order a ping pong table, so I think [playing] a bit of ping pong. Nick, my drummer, he’s really big into the technological side of everything that we’re doing — he actually custom made a light show for us, which is amazing. We’ve never had a light show, and we did it for pennies on a dollar because he’s just so innovative, and it’s durable. [He can take] a lot of the creative concepts that I have and build it into something real, which I guess would be one of his greatest assets, plus being one of the best drummers I’ve ever seen play. Chris is big into running too. He used to be a really good MMA fighter, if you can believe it. He was like ranked number one in the state for like a year or something, and you meet him and you’re like, “the heck?” He’s the most timid guy you’ll ever meet. He’ll shake your hand and look down and walk away with his hands in his pocket.

MN: If somebody who has never listened to your music before was to listen to only one song, which song do you think would sum up who you are as a band and why?

KC: Right now, without the next record [released yet], I would say “Gold” because it’s about existentialism; it’s about being wise and existing in this brief amount of time and sharing it and finding out your purpose. I guess that’s the most important thing there really is, is to find your purpose. And the song doesn’t sound as cliche as I do right now, so that’s why I like it [more], because the song’s talking — not me.