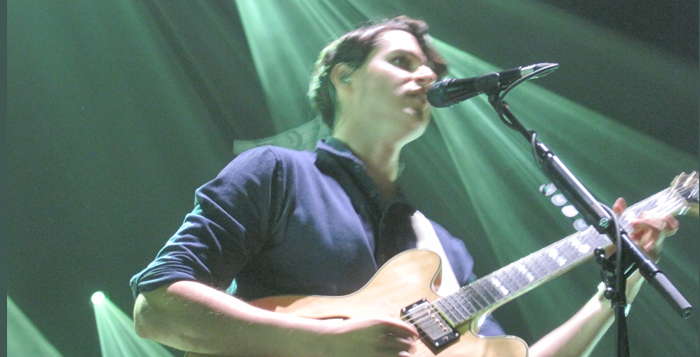 As the lights slowly dimmed at the Fox Theatre on May 5th, the mundane black backdrop on stage plummeted to the ground, revealing a flowery, Beach Boys-esque backcloth, Roman columns and a mysterious mirror. Simultaneously, Drake’s “Worst Behavior” blasted through the sound system as music’s favorite Columbia University grads strutted onto the stage one by one. Overwrought with anticipation and pure elation, the crowd proudly welcomed Vampire Weekend (VW) to Atlanta for the first time in four years.

I last encountered VW in April of 2010 at the Ryman Auditorium, an old church in Nashville, on one of their first headlining national tours. The band was young and inexperienced, but I could so easily see and hear immense potential. It was clear that the band was a group of talented musicians, but even more than that, I could feel their passion and creative expression constantly throughout the performance. Then and now, VW does not just play concerts, they create art.

The surprisingly appropriate Drake song completely changed the aura in the theater that Monday night, creating an atmosphere perfect for VW’s lively, well-crafted music. Ezra Koenig (lead vocals, guitar) then stepped up the mic and dove head first into Diane Young, the fast-paced summer-y single off of their latest album, Modern Vampires of the City (XL Recordings). The crowd was with them from the very start. There was no need to warm them up or even address them at all, so Koenig just kept on playing with tamed jubilance and understated confidence.

The night’s set list was trickled with tracks from all three of VW’s LPs, with perhaps a bit more emphasis on newer material. The set was balanced and flows effortlessly, as if the songs were meant to played in this succession.

“Cape Cod Kwassa Kwassa,” an infectious track off of Vampire Weekend, once helped to establish the band as a formidable force among the many guitar bands emerging at the time. With new-found musical reputability and songwriting abilities often compared to Paul Simon, the track propelled them forward and allowed them to begin to experiment on Contra, the band’s follow-up LP. However, from the very beginning, Koenig and Co. were deemed privileged dilettantes, having formed in white collar New York City at Columbia University. The band didn’t seem to care much about this assumed image and continued to make and play music that they themselves were proud of.

However, I can now say with confidence that over the last year, VW has shattered the box they may have placed in, expanding the range of possibilities for the future. Their live performance is more mature, better coordinated and gorgeously produced. Every detail, from the impressively synchronized lighting, to the artsy images that appear in the hidden screen of the mirror at the center of the set, the show is planned extensively.

Even the way the band flawlessly ended each song was evidently rehearsed and catered to live audiences. “Step,” an emotionally charged, lush ballad, laced with harpsichord and witty lyrics, ends as the band members dramatically bow their heads to the audience. “Holiday,” one of my favorites of the night, comes to a close with just a couple of extra chords and a rhythmic beat, perfectly in sync with pulsating lights and a blackout on the final chord. Each song’s calculated ending added a theatrical element to the show that complements the band well.

One challenge that modern bands often share is being able to produce what can be done in the studio live at a concert. Different acts have different ways of dealing with this issue; some pre-record the whole track, others pre-record only certain elements of the track, some attempt to use other methods to produce the same sound live and some may decide to leave out the electronic elements altogether. Overall, VW used a mix of these options, balancing live auto tune and electronic supplements with some pre-recorded elements, such as selected background vocals.

On tracks like “Everlasting Arms,” Koenig’s voice, although electronically altered, somehow sounded natural, as if it should be that way. However, on track “Ya Hey,” the squealing baby vocal refrain feels forced and over-produced live. The altered voices pierce through the texture of the music, but perhaps that is the point. After all, the song is about religious doubt and has been praised by critics, specifically Ian Cohen of Pitchfork, for its “duality of childish innocence and poetic confidence.” Either way, the live version quickly grew tired and was hindered by its dependence on auto-tune.

Despite their obvious growth and fresh maturity, there are small moments when the boys of Columbia U. let their inner-college student shine through. Aside from their awesome entrance featuring Drake, just before exploding into crowd-favorite, “One (Blake’s Got A New Face),” the epic opening sample from DJ Kool’s “Let Me Clear My Throat” blasted through the speakers and the crowd went wild. Thus demonstrating that despite their polished approach and newfound maturity, VW is still made up of college kids at heart.

It was a night of carefree dancing, musical bliss and unwavering admiration. There is no doubting this band’s unique talent and uncanny ability to turn a concert into a truly artful experience; a finished product, elegantly refined and expertly curated to represent to the audience who they are, how they want to be perceived and who they aspire to become.

Virtuosity does feel somewhat lost in a show that is so calculated and rehearsed. However, VW isn’t, and will most likely never be, the kind of band you go see for a legendary guitar solo or random jam session. Instead, they express a clear vision and an aesthetic experience to every crowd they play for. Will it be the same show at each stop on this tour? For the most part, yes. But VW is no longer the alternative college band I saw play a show in a small church in Nashville; now, they’re rock stars poised to shape the music world in years to come, staying to true to their own artistic vision and inspiring other artists and fans along the way. They can do what they please, take the road less traveled and, most likely, others will follow in their footsteps.