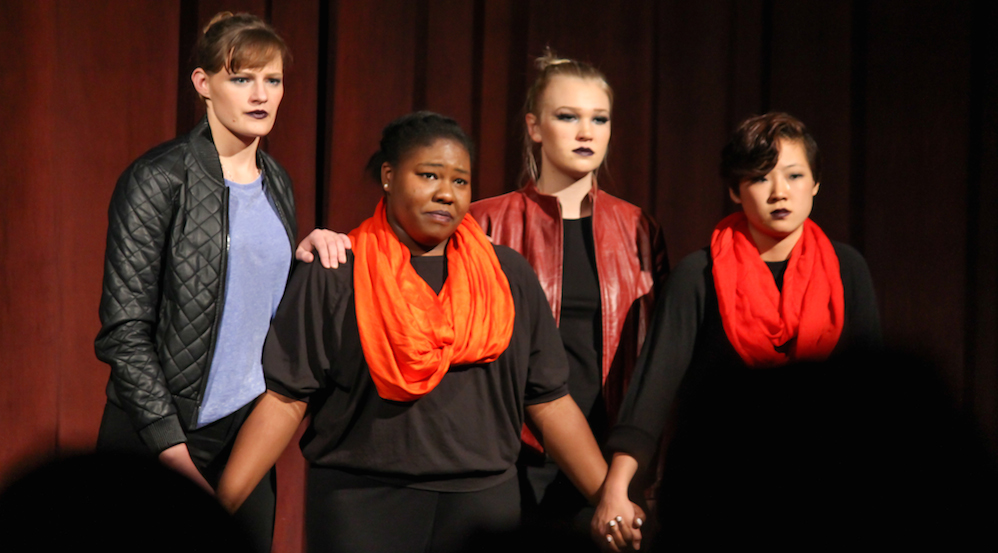 Feminists in Action, a student organization focused on addressing issues of gender in and around our campus, staged its annual production of Eve Ensler’s The Vagina Monologues over the weekend in the Harland Cinema, presenting to a sold-out house all three nights. The performance proved both powerful on a personal level and bothersome on a textual level.

As it was my first time seeing the Monologues, I was not quite certain as to what to expect. I knew that the piece generated a wide spectrum of reactions. This is a work that generates controversy while also having a rabid, enthusiastic fanbase. It has been both villainized and glorified. It could prove to be anything.

Arriving early, I took my seat at the end of an aisle, watching as the rest of the audience began to pour into the Cinema. It was a very diverse crowd, drawing both Emory students and members of the surrounding Atlanta area, with a wide range of ages and races represented. This was a community event, not merely an Emory one.

As the lights dimmed, the show opened with the entire cast entering the room, lining the walls to both the audience’s left and right, and beginning a stereoscopic, antiphonic discussion on the word “vagina.” It was an effective opening, as the crowd could be seen quickly swiveling their heads back-and-forth to catch a glimpse of whichever woman had begun speaking; the audience was not able to sit still, forcing an engagement with all those present. After the whole of the cast had climbed onto the stage following the delivery of their opening lines, the play quickly progressed to its monologues.

The Vagina Monologues are intended to raise awareness of issues arising from gender, and I feel it did a fantastic job of this. The cast, consisting primarily of undergraduate students from Emory College, was at ease with their roles and with the hundreds sitting in front of them. Ensler’s writing lent itself to an informality that made every monologue seem very personal and as if it was individually addressed to you. Some of the most powerful moments were those based on interviews Ensler conducted with those that are transgender and had experienced horrific discrimination because of their gender identity and with those women who had experienced rape in the course of the conflict in Bosnia.

Those dialogues were difficult to listen to because they did not shy away from the graphic details of the violence inflicted upon them by their assailants. It would have been near impossible for any person in that audience to not feel some disgust or pain at what was being described on stage; the actors moved and spoke with such emotion that it would require a true human disconnect to not be left on the verge of tears. It was powerful.

With all the relatable, colloquial language and simple empathy present in Ensler’s writing, there were a few aspects of the play that were disturbing and worthy of critique.

Placed near the end of the work, the monologue “The Little Coochi Snorcher That Could” was wholly inappropriate in the context of the greater Vagina Monologues. While some of the works explored sexual violence as an awful reality that thousands of women face every single day, this particular monologue described a sexual relationship between an obvious child, who refers to her vagina as a “coochi snorcher,” and a 24-year old woman. As I sat listening and watching the monologue, I was saddened. It was very clear what was happening; a little girl was being sexually exploited by an adult, but out of nowhere, at the conclusion of the monologue, it is described as a positive experience.

Immediately after the play, I began researching the dialogue, assuming that I had misheard some aspect that made it clear that it was between consenting adults — and it became very clear that it was not. The event was treated as a mere exploration of one’s sexuality, even though the girl had been plied with alcohol before the assault. There was no inkling of consent present at all. While the script had been toned down from the original version, which stated “ … if it was rape, it was a good rape,” the monologue raised numerous issues for me as a male. It described a non-consensual, criminal sexual relationship between two women as positive while many consensual heterosexual relationships were described in harsher or less favorable language.

This detracts from the Monologues. “The Little Coochi Snorcher That Could” should either be excised from any future performances of The Vagina Monologues or revised further to remove any element of rape from this tale if Ensler truly wants this to be a positive story. The women that performed in this section did a wonderful job; it is a shame that the material they had been offered was so offensive to our common dignity.

I greatly enjoyed my first Vagina Monologues and I feel they can serve as a vehicle to expose men and women to these very real, very under-understood (or even known) issues. I praise both the production team and the women that acted in the performance — they did a truly spectacular job that deeply affected me as an audience member. Only the playwright can right the issues with the current text and I hope that by next year’s V-Day, a new version might be out that will better present and represent the play’s message.