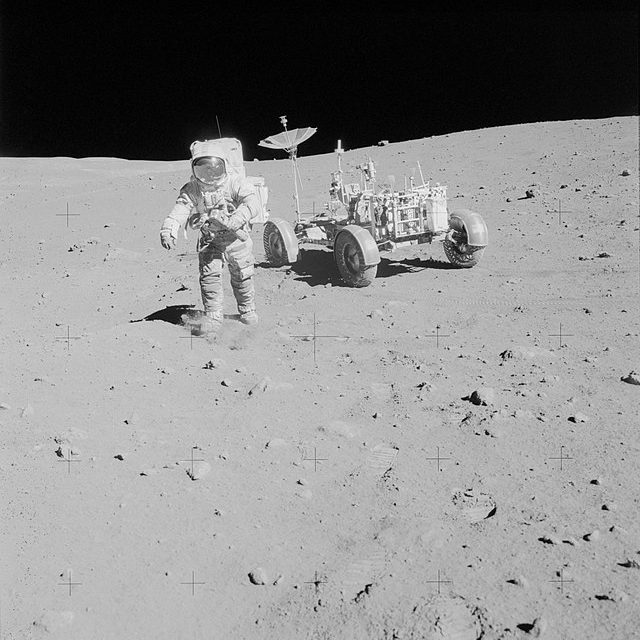 Fifty years ago, while traveling 250,000 miles above the Earth, Apollo 15 Commander David Scott did not have an advanced computer to rely on to make calculations. Rather, David Scott and his team had to memorize information written in hard bound books, essentially being their own computer. 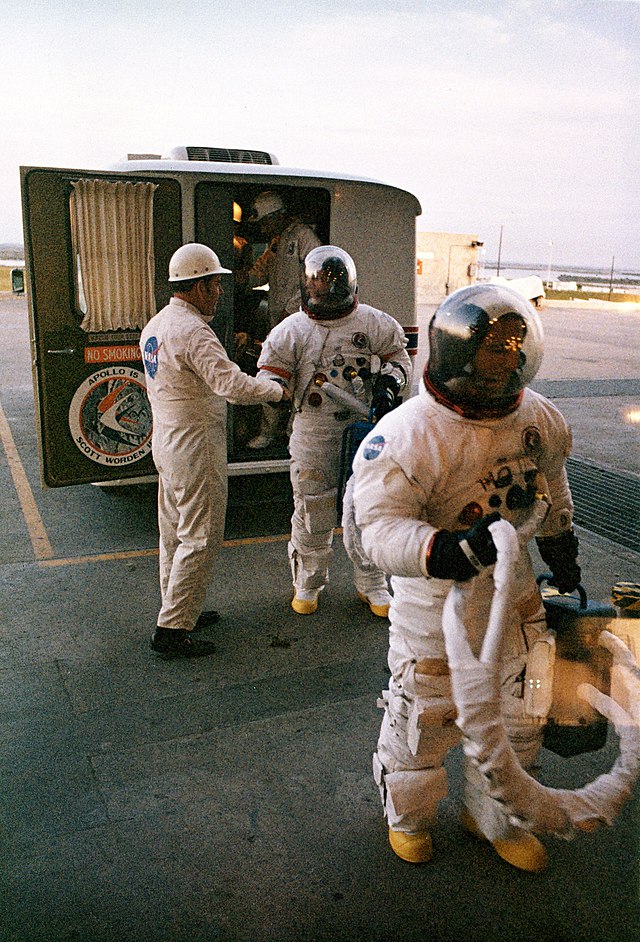 The Apollo 15 crew leaves the transfer van and heads to the Apollo 15 space vehicle ahead of launch. Photo courtesy of NASA

These books, as well as photographs, data files and memorabilia from the era are among the Scott family papers digitized and donated to Emory University’s Stuart A. Rose Manuscript, Archive, and Rare Book Library.

Father of Senior Lecturer in Sociology Tracy Scott, David Scott is one of just 12 people to have walked on the moon and among the four still alive. The University is using the Scott family papers to construct an Apollo 15 Learning Hub and an exhibit. 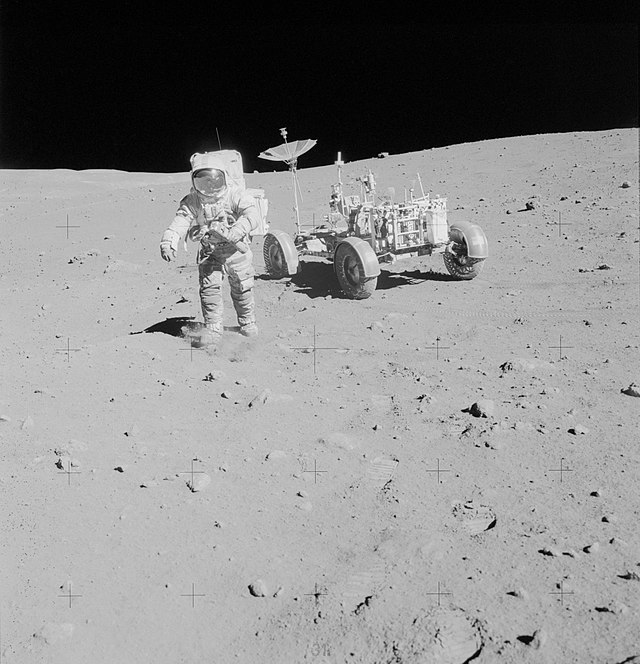 David Scott walks on the moon during the third EVA. Photo courtesy of NASA

“There’s a lot of interest in not only the science, but the social context and the families,” Tracy Scott said. “We have a lot of documents that people are going to want to look at, like the flight data files in hardbound books.”

The Scott family papers will not just reveal scientific insights, but the “larger context” of the Apollo 15 mission through press articles and magazines, photographs and memorabilia.

For example, in 1972 the U.S. government sent the Apollo 15 crew on “goodwill trips” to Poland and Yugoslavia after the mission, visiting the iron curtain in the middle of the Cold War, Tracy Scott said. The Scott family has “historically fascinating” photo albums from the trip that the government put together and other relics of the visit.

Compiling these primary resources, the Emory Center for Digital Scholarship (ECDS) will launch its public Apollo 15 Learning Hub on July 26, marking the 50th anniversary of the rocket’s launch.

ECDS and Tracy Scott began conversations about the project in 2016, with the initial objective of figuring out how to make the resources available online for public education, said Joanna Mundy (18G), project manager for the Apollo 15 Learning Hub.

Mundy said that they wanted to in some way align the trip’s 50th anniversary with “an important moment in the development” of the hub.

The Apollo 15 Learning Hub will feature fully scanned primary source documents that the public can do a “deep zoom” into, Mundy said. The documents will be available via Readux, an application developed by ECDS that allows individuals to sign in and make notes on documents, Mundy added.

“These are the documents [the astronauts] actually took with them, so they have the notes that they were making as they go,” Mundy said. “It even marks in some places what they ate that day and what photographs they were taking at what minute marks, those kinds of notes to self.”

The hub will highlight a collection of other digital media resources, including photographs, videos and audio files, filtered in a searchable database. 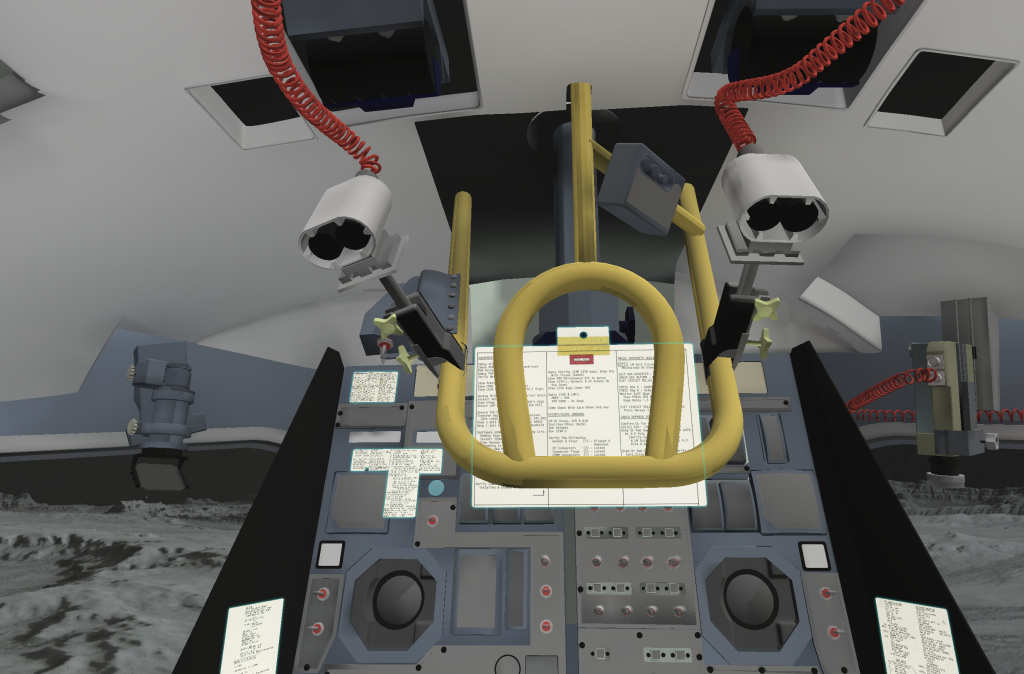 Inside the 3D replication of the Apollo 15 lunar module created by Arya Basu.

In the 3D model, Basu said a user can hover over and click on cue cards to bring up a primary source that the astronauts had in space, enhancing the learning experience to make users feel “in that moment and perhaps assuming the role” of the astronauts.

To mark the launch of the Apollo 15 Learning Hub, ECDS is hosting a webinar on July 28 at 1 p.m. to discuss the resource and what went into its creation.

While the Apollo 15 Learning Hub will feature scanned and digitized primary sources, there will be an accompanying physical Apollo 15 exhibit on the third floor of the Robert W. Woodruff Library, Mundy said.

The exhibit will also officially open on July 26 but will likely be in the library through the spring semester for students not on campus over the summer to view, Mundy added.

The installation will feature posters on what life was like growing up in an astronaut family during the early NASA era, the three small subdivisions families of astronauts and NASA employees lived in outside of the NASA Johnson Space Center and the celebrations following Apollo 15.

“One of the reasons for the hub is to focus more on the kind of context and not just on the science,” Tracy Scott said. “There are tons of websites that give you the technical details and scientific details, but there are none that give you the social context. No one has really explored that in a holistic way.”

The exhibit will also showcase old film reels belonging to David Scott that the University had professionally scanned. These videos include footage from the moon and training exercises. 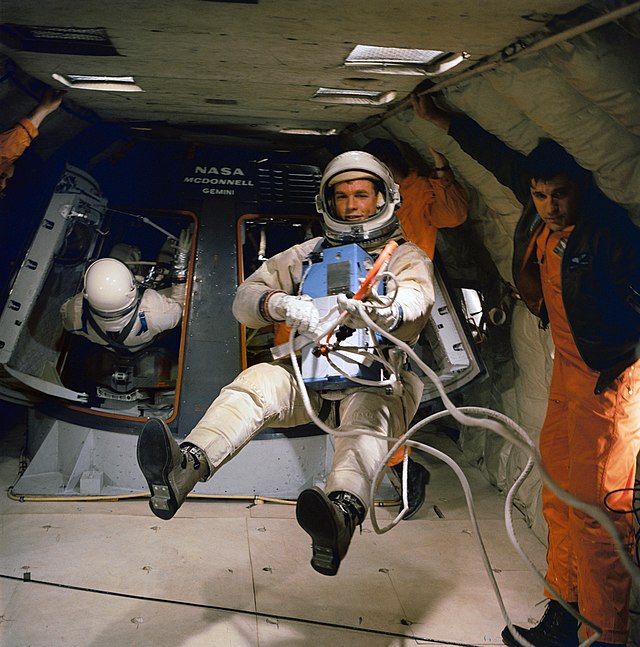 In a weightless state, David Scott participates in extravehicular activity training before embarking on Gemini 8. Photo courtesy of NASA

However, Exhibitions Preparator John Klingler (90C) said that it is hard to attract people to come into the building, especially since the library has been creating more traveling and online exhibitions. To make the Apollo 15 exhibit be “an experience that people can’t have online,” Klingler plans to include a projector component, showcasing videos on the ceiling of the rotunda.

Although these resources launch July 26, Basu emphasized that this is only phase one of the University’s involvement in Apollo 15 education. Using feedback analysis, ECDS plans to “incrementally improve” the experience of the learning hub to leave audiences with a lasting impact.

Likewise, Tracy Scott is also ensuring these unique primary sources will have a lasting impact. In the spring semester, she plans to teach a sociology course about the social contexts surrounding Apollo 15 and the early NASA era.

“I want to do more with our family papers, looking at those broader contexts, the family, the media, that kind of thing,” Tracy Scott said. “I thought what better way to pull it together for myself than a class where I can get the students to help me.”

That class will be a “quite collaborative” seminar where Tracy Scott will provide the framework and background for the social contexts of the time and students will use the primary source documents at Rose Library for their own projects.

Using this expanded look into the sociology of the era, Tracy Scott said she hopes to create a companion site to the learning hub that is more focused on the social contexts.

“What I hope happens is that we start looking back on these things in a more realistic and holistic way, not just the kind of space fan, sci-fi, starstruck sort of way,” Tracy Scott said. “We’re going to be able to add more depth about the real historical context and some of the things that were quite extraordinary that don’t get talked about.”