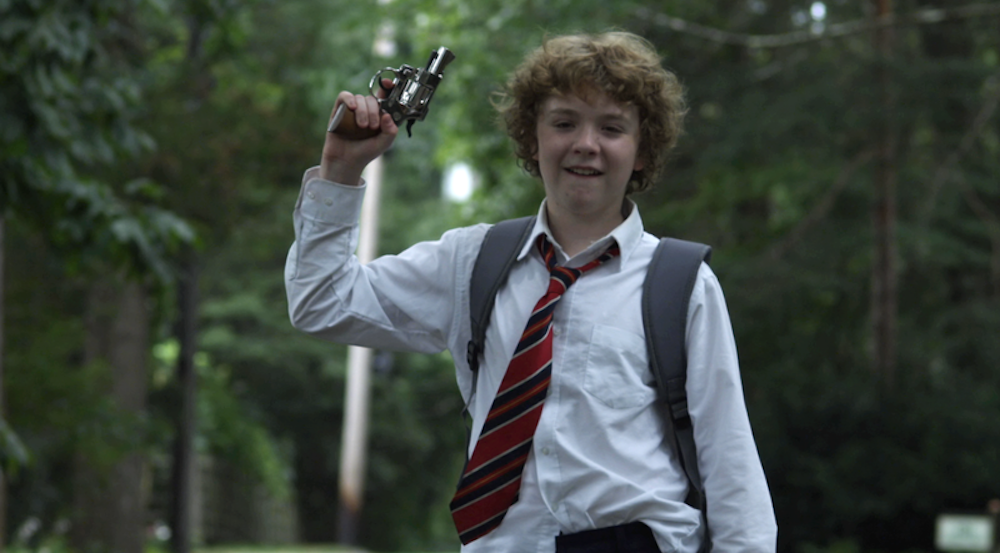 Have you ever wondered what it would look like if the kids from South Park went to Catholic school? You will come pretty close to realizing that oddly specific dream by watching Funeral Kings, the 2012 coming-of-age story directed by Kevin and Matthew McManus. In the film, three altar boys play hooky after altar serving at funerals. Pint-sized spitfire Charlie (Alex Maizus) and his friend, Andy (Dylan Hartigan), find their usual post-funeral antics shaken up when their altar-serving buddy, Bobby (Brandon Waltz) is sent to juvenile detention. Before Bobby goes to juvie, he gives Andy a trunk full of contrabands that are to remain unopened until Bobby gets out. David (Jordan Puzzo), the straight-laced new kid, replaces Bobby in his altar duties and reluctantly tags along with Charlie and Andy on their post-funeral outings, including trying to open the mysterious trunk.

The characters speak the way you would expect 14-year-old boys to speak (which is not necessarily a bad thing, considering that they are 14-year-old boys). The only problem with this is that 14-year-old boys can be very difficult to listen to after a while. If you don’t have a mental image of this, just think of a Quentin Tarantino character with a cracking voice that brags about seeing R-rated movies. That’s what you can expect dialogue-wise.

However, that does not prevent the characters from being their own distinct people. Charlie is the impulsive product of negligent parents; Andy is a normal, mixed-up adolescent trying to figure life out; David is a quiet kid trying to fit in at his new school while staying true to what he thinks is right. The characters are clearly defined, however, how they became the way they are is foggier.

The acting is nothing spectacular but there’s an undeniable sincerity that makes it enjoyable to watch. The actors look, speak and act the way that kids that age would act. I appreciate the fact that the actors were actually the age of their characters, instead of 20-year-olds in hoodies. It gives the movie more authenticity and relatability. You can look at these actors and say, “Oh yeah. That was me freshman year of high school.”

Perhaps the most difficult part of this movie is the story (or, more appropriately, stories). While the film follows only three characters that are constantly together, it manages to go in myriad directions. While many of the plot points start out intriguing, none of them come to a satisfying conclusion. The story is full of events just zooming past you as quickly as they possibly can to make room for the next thing. While a coming-of-age story can sometimes benefit from a frenetic structure mirroring the characters’ everyday lives, this movie really could have used a heck of a lot more focus.

The comedy of the film is, as expected, irreverent and immature. I don’t mean this negatively, though. I found a good bit of it genuinely funny, if only for the sheer ridiculousness of it. That said, the novelty of swearing, smoking altar boys wears off pretty quickly (to be quite honest, it wears off after the first scene). If you’re going to get tired of that schtick, this movie probably isn’t for you. That includes the inevitable “non-threatening kid walking in slow-motion to funky music to look cool” shot.

Funeral Kings is, unquestionably, a mess. The story bounces off all the walls and crashes through a window. The characters are good but you don’t understand enough about them for them to be great. The humor is nothing you haven’t seen before. However, it’s got such a heartfelt, likeable charm to it that I couldn’t help but enjoy it. The unfocused story was frustrating on a structural level but in terms of viewing experience I never found myself uninterested or feeling that any of the plot points were hackneyed. It’s that thought that makes me feel that Funeral Kings would work better as a series as opposed to an 85 minute film.

The movie, like it’s characters, is full of potential that is not unlocked. It feels as if you’re watching a first draft, waiting for these great ideas to come full circle, but they still need work. It’s a Hot Pocket in terms of story: awesome on the surface, unfinished on the inside.

This movie is probably best for fans of irreverent humor — as well as recent graduates of Catholic schools.