Unnoticed on Netflix: ‘Escape From Tomorrow’ 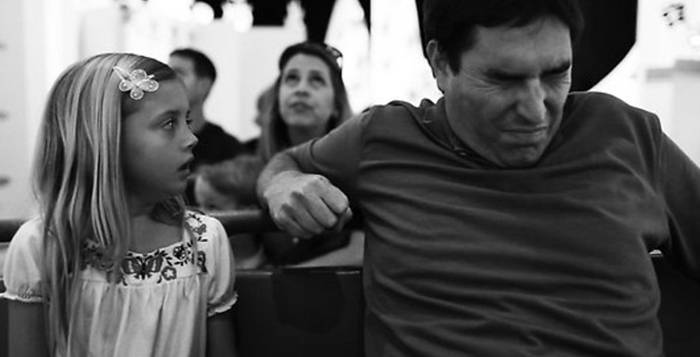 Have you ever just sat there and wondered what in the name of sweet [insert deity or BeyoncÃ© here] you just saw? I’m assuming the name for this particular emotion is “Escape From Tomorrow,” coincidentally also the title of an independent horror movie you can find on Netflix.

The film follows a husband and father of two, Jim White (played by Roy Abramsohn), who is planning on enjoying his last day of vacation at Disney World with his family when he receives a call telling him that he has been fired from his job.

That’s not to say that the plot of the movie is confusing. It’s relatively easy to follow, but there’s a giant black cloud of “WHY?” hanging over the viewer’s head.

After reading the description and watching the first couple of scenes, I was expecting this low-budget flick to go along a “The Shining”-meets-slasher-film route, but then the slow burn of surreality kicks in and, before you know it, the movie straps you in for a one-way trip to Crazytown.

However, this horror flick never becomes surreal in an immersive sense. It’s more like the director really wants you to know he watched “Eraserhead” this weekend (and he totally gets it).

My utter confusion about how crazy-pants this movie gets can be attributed to the plot provided on Netflix – a mere “on the last day of a family vacation at Disney World, Jim learns that he’s lost his job. Soon thereafter, he begins to lose his mind.” That minimal description made me think this was just going to be a standard B-movie.

But if you know what you’re getting into, maybe the last third of the movie might not seem quite as, well, weird. I have no issue with strangeness in a movie, but this one left me asking how much of it was even necessary.

Plot points begin and end with no significance to the larger story. For example, there’s a side plot involving a former Disney princess performer becoming obsessed with Jim’s daughter that goes nowhere. The numerous plot diversions are pretty distracting and pointless. I will give the plot this though: it’s pretty darn unpredictable.

The acting as a whole is nothing spectacular, but it’s serviceable. Abramsohn as Jim does a decent job of portraying a man losing it in a theme park. A few of the side characters (including a former Disney princess performer and an obese hillbilly in a scooter) are understandably cartoonish (it is a horror film about Disney World, after all), but this is more campy than scary.

I would normally tally that up as horror parody, but the tone of the film is too creepy for this to be a joke. The side characters and their greasy wigs give a painfully lousy performance – the kind that used to be reserved for cheesy 1980s drug PSAs. It’s a little rough to watch.

Now, I know what you’re thinking: why would Disney allow people to film a low-budget horror movie involving their theme park? Answer: they didn’t. Thanks to the director’s use of guerilla filmmaking they shot large portions of the film in Disney World with zero permission from the Big Mouse. This required the crew to use small handheld cameras and no lighting equipment for many of the scenes.

All of this considered, the cinematography and audio are surprisingly good. There are a few slips in quality here and there but nothing unusually bad for a low-budget movie. The fact that this movie could be filmed, edited and distributed without legal repercussions is kind of amazing in and of itself. However, that hardly makes it a fantastic film.

While the production history of the film is interesting, that does not give it a pass for the aimless story and mediocre-at-best acting. It’s unique, strange and fun to watch though.

Watch it if you’re interested in guerilla filmmaking or weird, campy horror movies. Feel free to skip it otherwise. 2.5 stars.