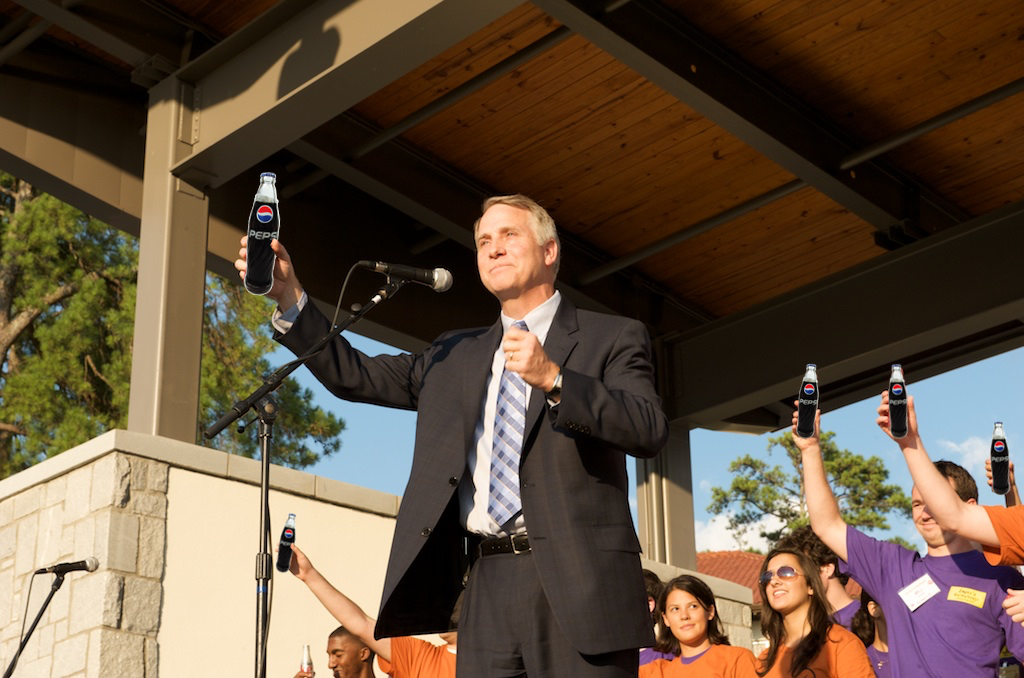 On the heels of Bon Appétit Management Company replacing Sodexo USA as Emory’s food service vendor, the new management is bringing with it some sweeping changes, including the addition of PepsiCo’s food and beverage brands to campus.

As terms of the contract that goes into effect June 1, there will be no Coca-Cola products on campus and the Coca-Cola Commons in the Dobbs University Center will be renamed the Pepsi Plaza. These terms were negotiated prior to the announcement of the vendor change.

PepsiCo, with more than 22 brands including Pepsi, Cheetos and Mountain Dew, may be better known as the punchline antithesis to Emory’s stature as the unofficial “Coke University.”

In a prepared statement by Coca-Cola Global Director for Brand Synergy Todd Spritezer, the Company expressed its displeasure in the University’s decision.

“Emory makes up 84 percent of our college market share and is a key player in our brand recognition strategy,” the statement reads. “While we ultimately wish Emory and Bon Appétit the best of luck, we are disappointed that our long, beneficial history with Emory is being cast aside for petty politics.”

Bon Appétit spokesperson Anita Sours wrote in an email to the Wheel that careful consideration was made in the decision to retain PepsiCo for Emory’s campus dining, adding that 15 percent of the beverage options on campus will remain the same.

“Bon Appétit and Pepsi have a storied history with successful partnerships providing quality food service to Emory’s peer institutions such as Faber College and the South Harmon Institute of Technology, among other universities, museums and corporate campuses,” Sours wrote. “Additionally, Pepsi’s commitment to sustainability and changing their portfolio to add healthier options is one of our most important values as a company.”

The University has a long and intertwined history itself when it comes to The Coca-Cola Company. Asa Griggs Candler, founder of The Coca-Cola Company, wrote what is known as the “million-dollar letter” that funded the move to the Atlanta campus in 1915. His brother, Methodist Bishop Warren Candler was an Emory alumnus, former president and its first chancellor.

According to the Emory history website, Coke has “given rise to family fortunes for the Candlers, the Woodruffs, the Goizuetas and others who have been extraordinarily generous to Emory. The philanthropy of these and other donors has enabled Emory’s growth and empowered its ambition to become one of the nation’s leading universities.”

In an email to the Wheel, Candler’s great-great-grandnephew I.M. Candler-Woodruff wrote that this break in precedent was “heartbreaking” but in the long run, his forefathers’ legacy would remain intact.

“Honestly, I am flabbergasted by this decision and I never thought I would see this in mine, or any of my family’s lifetime,” Candler-Woodruff wrote. “But let’s be honest- we’re still Cokelanta and our market share isn’t going anywhere.”

Food Advisory Committee at Emory (FACE) Vice-President and College senior Mike Kidder said that the Pepsi integration wouldn’t affect anything beyond the beverage choices available and vending machines across campus.

“Many PepsiCo products are already on our shelves, including Tostitos, Ruffles and Quaker oatmeal,” Kidder said.  “And besides, who doesn’t want more Doritos on campus?”

Kidder added that while FACE was originally morally opposed to the idea of allowing Pepsi on campus,  Bon Appétit’s presentation was solid and he believes “most students won’t recognize the difference.”

Editor’s Note updated 2:52 P.M.: Members of Emory’s administration were unable to comment because they decided to go on an all expense paid cruise through the Bahamas. If you haven’t realized this by now, 1) We are very sorry for you and 2) This is an April Fool’s article.