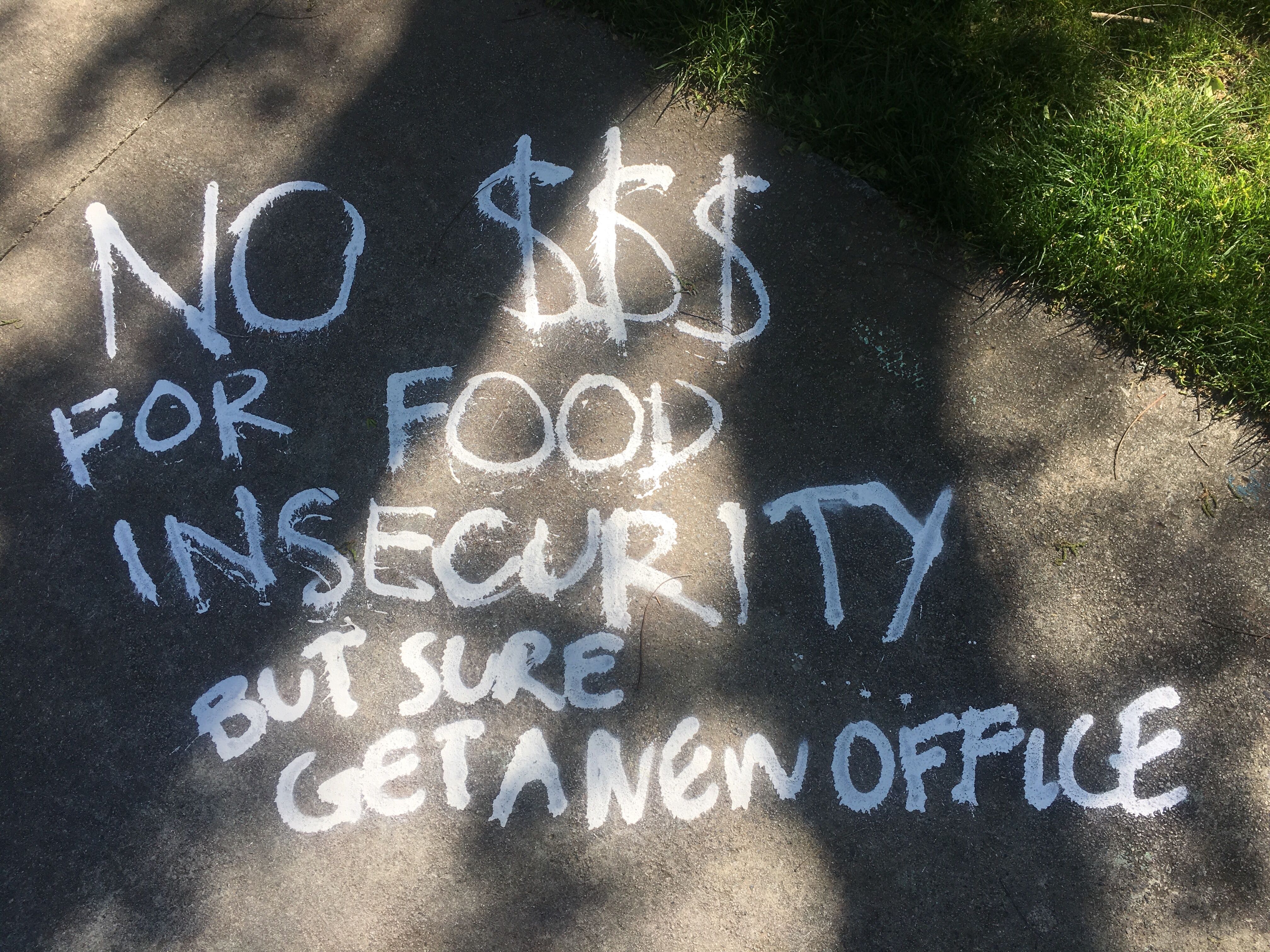 One of the chalkings left by Emory Week of Protest (WOP) before an Emory Police officer ordered their erasure on April 16/Ayushi Agarwal, Photo Editor

Emory must do a better job of living up to its Open Expression Policy.

On April 15, chalkings appeared around the Quad protesting the University’s spending priorities. The chalkings were subsequently removed, violating Emory’s Respect for Open Expression Policy that dictates chalkings will only be removed “from unpermitted locations or for special circumstances such as construction or special events. Otherwise, chalk messages will remain subject to rainfall.”

On April 16, Vice President for Campus Services Matthew Early confirmed to the Wheel that the removal of Emory’s Week of Protest chalkings outside Convocation Hall was a mistake. The University responded appropriately to the error, but the act’s timing has damaging implications for the perception of Emory’s free speech policies.

Although Early stated that Emory Police Department (EPD) has already planned meetings to train officers on the Open Expression Policy, the violation was an upsetting mistake at a critical time.

The response to the chalkings comes after a series of incidents that have called into question the University’s commitment to open expression and to fair treatment of student concerns.

By failing to send out a timely public statement regarding the desecration of the ablution room in the Claudia Nance Rollins Building, University President Claire E. Sterk and her administration unintentionally gave the impression that Emory respects the rights of certain student groups more than others. Contrasted with the administration’s lengthy and emotional response to the posting of mock eviction notices two weeks ago, the response to the defacement of the ablution room felt empty. After the flyers, the University sent out three statements, one on the day following the incident from Interim Vice President for Campus Life Paul Marthers and two later emails from Sterk herself. In both cases, initial rumors concerning the incidents turned out to be false, as the University has not found evidence that Jewish groups were targeted by the flyers or that the desecration of the prayer room was an intentional act. Yet only one event merited a University-wide response before any conclusions were reached.

While the message sent to students regarding sensitivity and respect for the concerns of the wider Jewish community was fair, the University must be more consistent regarding its response to all student groups. Since Sterk claimed to be “deeply affected” by incidents impacting Jewish students, a double standard is clear: Why didn’t she express similar feelings about incidents impacting Muslim students? “The heart of who we are and what we value as an academic community” — a phrase used by Sterk last week — is not exclusive to a single student group; this applies to all students of the Emory community. The chalking on the Quad that reads “[n]o statement for N[ew] Z[ealand] & ablution room but statements for everyone else” expresses a valid concern for Muslim students who feel like their voices aren’t being heard.

Emory must stand up for all students’ right to free speech, regardless of police errors, political correctness and common sentiment. The April 12 update about eviction notices emphasized “maintain[ing] a balance between Emory’s strong support for free speech and the safety, dignity and privacy of our students.” Now more than ever, Emory must maintain this balance and remain consistent in its upholding of the Open Expression Policy. Emory must support all student groups equally instead of favoring those with the largest or loudest voices.

The posting of the mock eviction flyers and the desecration of the ablution room offer important lessons for the Emory community and administration that should not go unheeded. If Emory wants to continue to mediate controversial campus events, the administration must learn to balance respect for free speech while responding fairly to the legitimate concerns of all student groups.