University professor remembers Gorbachev, recipient of honorary law degree, as ‘the most consequential man in the late 20th century’

Former Soviet Union President Mikhail Gorbachev — who served as the last leader of the Soviet Union from 1985 until the country dissolved in 1991 — died on Aug. 30 after a “long and grave illness” at 91 years old.

Although he is known for advocating for democratic ideals in the Soviet Union, Gorbachev left his mark on Emory University in 1992 when he served as the keynote speaker for Commencement and received an honorary law degree.

Associate Professor of History Matthew Payne, who specializes in modern Russian and Soviet history, said that Emory awarded Gorbachev with the degree because he was the first lawyer to serve as a Soviet leader.

Assistant Vice President of Emory Communications and Marketing Laura Diamond wrote in an email to the Wheel that the University was “honored” to welcome Gorbachev to campus.

“He told Emory graduates that ‘from your ranks will emerge the formulators of policy in the 21st century,” Diamond wrote.

Diamond added that Gorbachev believed Emory graduates would “be leaders of a new type, thinking on a broad scale and without prejudices, leaders who are not thinking just about the next elections but about mankind’s long-term goals and common interests.”

Gorbachev’s 1992 visit to Atlanta was part of a two-week tour across the United States to raise money for the Gorbachev Foundation, the first independent think tank in modern Russia. The foundation is dedicated to researching social, economic and political issues while promoting democratic values.

He also met with former U.S. President and University Distinguished Professor Jimmy Carter during his time in Atlanta to discuss the Carter Center initiatives and the possibility of using it as a model for the Gorbachev Foundation, according to an essay on the University’s honorary degrees by former Emory Historian Gary Hauk.

Payne noted that Gorbachev’s involvement with Carter was “understandable,” as their political careers mirrored each other.

“Carter was seen as a failed president, but what did Carter push for? Democracy, human rights, respect … ending the Cold War,” Payne said. “They’re very similar values, and they both had, in some ways, much better post-presidencies than they had presidencies.”

The Carter Center called Gorbachev a “significant driver of change in the 20th century” in an Aug. 30 statement addressing his death.

“Gorbachev and former U.S. President Jimmy Carter, both of whom would go on to win the Nobel Peace Prize, first met in 1987 in Moscow to discuss peace in the Middle East,” the statement reads. “President Carter noted after that meeting that they both grew up in rural areas and said: ‘Two farmers can’t be antagonistic toward each other.’”

Gorbachev was born in the village of Privol’noe, Russia on March 2, 1931. During World War II, Privol’noe was occupied by the Nazi Party, and Gorbachev was forced to work for them, Payne said.

“That’s one big part of his legacy — his attempt to take communism seriously as an ideology of liberation and to implement not a one party state approach democratically and not to have a bureaucratic, centralized planned economy,” Payne said.

Payne described Gorbachev as “the most consequential man in the late 20th century,” altering the world’s political climate.

Two years after taking power, Gorbachev took steps to slow down the nuclear armaments race which characterized the Cold War by signing the Intermediate-Range Nuclear Forces Treaty with former U.S. President Ronald Reagan. This banned both Soviet and American missiles with ranges of 500 kilometers to 5,500 kilometers.

Payne added that Gorbachev also reduced conventional arms, which are weapons that use kinetic, incendiary or explosive energy. This move was popular among many Europeans — an enthusiasm that was dubbed “Gorbymania.”

“He, from the very beginning of his tenure, reduced very, very tense relations with America,” Payne said.

That same year, Payne noted that Gorbachev implemented a policy of glasnost, or openess, in response to the 1986 Chernobyl disaster. A nuclear power plant had exploded in Ukraine, leaving the surrounding area radioactive and uninhabitable. Although Gorbachev had discussed the idea of glasnost as early as the 1970s, Chernobyl reinforced the importance of an open policy for Gorbachev.

“Nobody told him about [Chernobyl] immediately because they’re all trying to cover their backsides and he had no idea that this kind of thing could happen,” Payne said. “He began to realize that a lot of things were going on in the Soviet Union … that needed public scrutiny.”

Glasnost made government institutions more transparent for citizens and allowed for more freedom of expression in the media. People were allowed to express disagreement with past and current Soviet policies.

“It doesn’t mean you have freedom of speech,” Payne said. “But he’s allowed journalists … to start talking about difficult topics.”

Soviet soldiers occupied Afghanistan from 1979 to 1989, which ended when Gorbachev decided to bring his troops home in February 1989 after losing about 15,000 Soviet lives in the Afghan war.

Gorbachev also played a role in the fall of the Berlin Wall, which famously separated the city of Berlin into East and West Germany from 1961 to 1989. Although Berlin was not directly under Gorbachev’s control, the Soviet Union was East Germany’s political sponsor and had a strong military presence in the country, making Gorbachev an influential figure.

Reagan knew this, and in 1987, he famously said “Mr. Gorbachev, tear down this wall” during a speech in West Berlin, Payne noted.

“Gorbachev did not tear down the wall, but he didn’t stop the East Germans from tearing it down, the people of the government,” Payne said. “Of course, that began Great Eastern European liberal revolutions. Most of those countries are now in the EU, and, more controversially, they’re in NATO.” 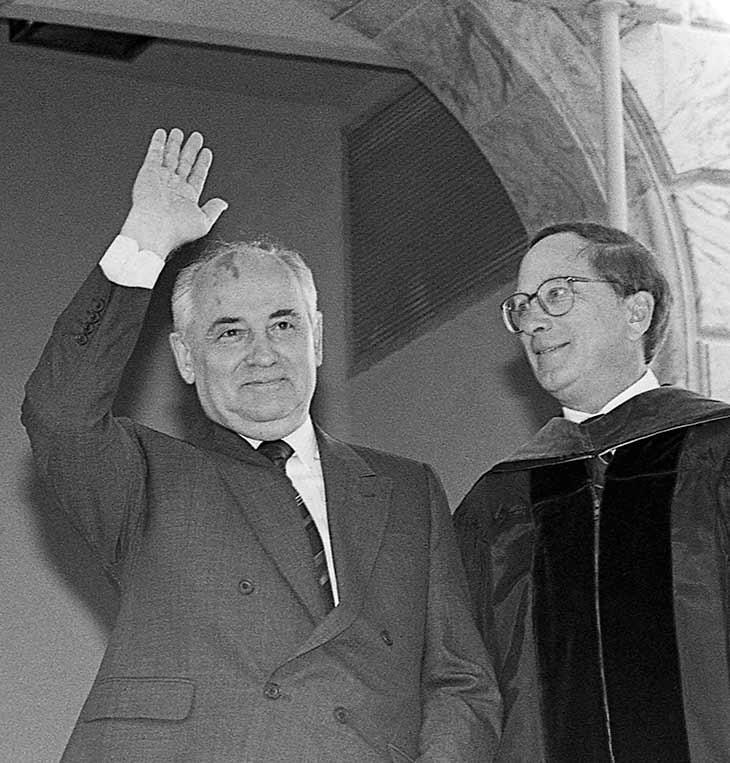 Payne also noted that Gorbachev worked to “democratize” the Soviet Union with his 1987 slogan “Demokratizatsiya,” ultimately introducing multi-candidate — but not multi-party — elections for Communist Party officials and Soviets.

“The first free elections happened in ’88 and ’89,” Payne said. “[The elections] really unleashed forces that communist and one-party state rule could not contain, the most important of which was nationalism.”

Gorbachev later expressed willingness to adopt multi-party elections in the Soviet Union in 1990.

Nationalism increased across the Soviet Republics amid the newfound freedom, and people began to resist the rule of Gorbachev and the single Soviet Union. Some strict conservative politicians within Gorbachev’s own administration disagreed with his decisions and believed he was going to cause the Soviet Union’s downfall, so they worked with Soviet army heads and the Komitet Gosudarstvennoy Bezopasnosti — the main Soviet security agency — to carry out a coup in an attempt to overthrow Gorbachev.

“[Gorbachev] was one of the most betrayed guys in human history,” Payne said. “When the putsch happened in August 1991, he must have felt like Caesar with Brutus.”

Although the coup collapsed after three days, the damage was done. Gorbachev dissolved the Communist party and granted independence to the Baltic states. He proposed a looser federation for the remaining republics, but the Soviet Union ultimately collapsed in 1991. This resulted in the end of the Cold War, a period of geopolitical tension between the United States and the Soviet Union that lasted from 1947 to 1991.

“If you hadn’t gotten Gorbachev, there might still be a Soviet Union,” Payne said.

The effects of Gorbachev’s politics reached far beyond Europe — Kate Stein (92C) was one of 1,909 Jewish people who left the Soviet Union under Gorbachev’s policy of glasnost in 1987 before entering Emory the next year, according to a 1992 Associated Press (AP) article announcing Gorbachev as the University’s Commencement speaker. Under glasnost, people were able to criticize former policies that prevented Jewish people from emigrating out of the Soviet Union.

“I think he is an outstanding man,” Stein told AP. “I would just say, ‘thank you’ for what he started.”

Stein’s parents were among the crowd during Gorbachev’s speech. AP wrote that Stein’s family “[felt] a deep, personal indebtedness to Gorbachev.”

″We were waiting for eight years,” Stein told AP. “It was all I could dream that maybe tomorrow, I can go away from here. I try to pinch myself and say, ‘I’m in America.’ If anybody had told me seven years ago I would be in America now, I would have said, ’Thank you for telling me that, it’s a nice dream.‴

However, Gorbachev’s accomplishments did not shield him from criticism, Payne noted. Although the fall of the Soviet Union was celebrated in the United States, it was a “disaster” for the people who lived there and were forced to face an “economic catastrophe” in post-Soviet nations.

“People were not being paid, there was no support for education, health and pensions,” Payne said. “People were angry about this, and so they blamed Gorbachev.”

Additionally, Payne said that many viewed Gorbachev as a hypocrite because he tried to maintain a stable relationship with Soviet elites while also meeting the needs and aspirations of the Soviet people.

Payne lived in the Soviet Union leading up to and during the country’s collapse and said the anger towards Gorbachev was “intense.”

Working on archives in Moscow when Gorbachev won a Nobel Peace Prize in 1990, Payne remembered Soviet elites holding a large celebration, lighting up the Kremlin and gathering for a large banquet. Meanwhile, he and Soviet citizens struggled to find enough to eat. When Payne stopped at a grocery store to get dinner that night, he said the shelves were empty, not even offering staples like bread and cheese. While shopping, he overheard an older “disgruntled” Soviet citizen complain that “they’re partying in the Kremlin, but we’re going hungry.”

“This really tells you that his foreign reputation as a peacemaker is very earned and was celebrated at the time and is celebrated now, but his failures as a leader — taking care of the thing that most people care the most about at any given time, which is putting food on the table for their family — had a deep impact,” Payne said.

For many people, Gorbachev’s legacy is tainted by these failures, Payne explained, saying that some see him as “one of history’s losers” who did not meet all of his goals. However, Payne argued that this should not be the case.

“This leads us to ask ourselves a question,” Payne said. “Should we value more the failed revolutionaries fighting for peace and democracy and reform, or the successful figureheads of the status quo?”