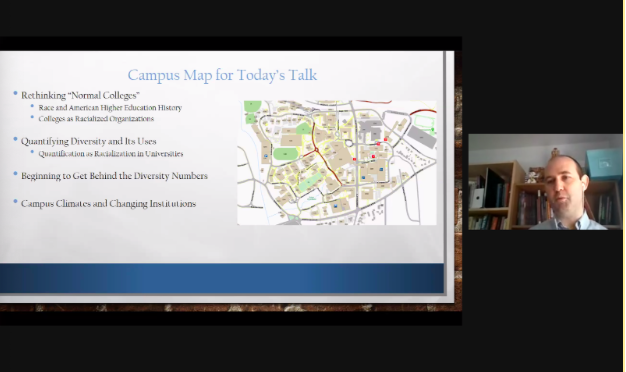 As part of the University’s celebration of Black History Month, Faculty Director of Research Initiatives in the National Center for Institutional Diversity at the University of Michigan W. Carson Byrd gave a virtual presentation on rethinking the ways colleges approach diversity on Feb. 8. Nearly 150 people attended the event.

Byrd provided a brief history of racial inequality in education, explaining that racism is embedded within the founding of higher education and that the fight against inequality has been ongoing and primarily student driven.

During the colonial and antebellum periods, higher education advanced “assimilation, enslavement and genocide,” he said. Post-Reconstruction schools were segregated in part due to land grant colleges and standardized testing that emerged after World War II.

Byrd said colleges are racialized organizations that tend to prioritize teaching and research in faculty evaluations above other areas of achievement, like service, that have historically benefitted minority groups.

“Service is often given the least weight,” Byrd said. “It’s the least compensated, but faculty of color, particularly women faculty of color, are engaged in these service activities more through mentoring, serving on diversity committees, serving in student organizations as sponsors, doing this work more than their white colleagues.”

Because the service component does not carry as much weight when it comes to evaluations for tenure and promotions, Byrd noted this system reinforces inequalities on college campuses, with some professors encouraging their colleagues of color to focus on research and “say no” to service.

“Instead of saying, ‘You should just say no,’ perhaps we should actually change the policies to recognize where the inequalities exist and who’s doing more of the work instead of just giving back to this kind of unwritten set of rules of ‘well this is how we do things here, maybe you should adjust,’” Byrd said. “Perhaps it should be the organization that adjusts, not the person.”

“We must work diligently to create organizational and policy changes so that we can remake higher education to the ideas we hold true,” Byrd said. “Until we are willing to challenge where, how and why we work in higher education … we will continue to be surrounded by racial inequality and remain ignorant about how we can change that reality now and in the future.”