An Emory Continuing Education (ECE) instructor is no longer affiliated with the University after it began an investigation into her blog, which promotes views against several minority groups.

The Wheel connected the minds.com blog, which expresses racist, anti-Islam and anti-immigrant views, to Laura Corvino, an ECE Italian instructor. The minds.com username contains the instructor’s full name, and the profile includes references to Georgia and Emory. The instructor’s Facebook account, which advertises her “Learn Italian for FREE!” group, is an active member of extremist Facebook groups such as “ANTI COMMUNIST” and “TruthSeekers.”

Corvino’s Facebook account posted images containing text such as “Racism is a lie that boils down to jealousy & envy for the Beauty, the Intelligence & the Success of the WHITE PEOPLE.”

Corvino declined an interview with the Wheel and did not confirm she manages the account. However, Corvino wrote in a Feb. 6 blog post, after this article’s original publication, that ECE had fired her. 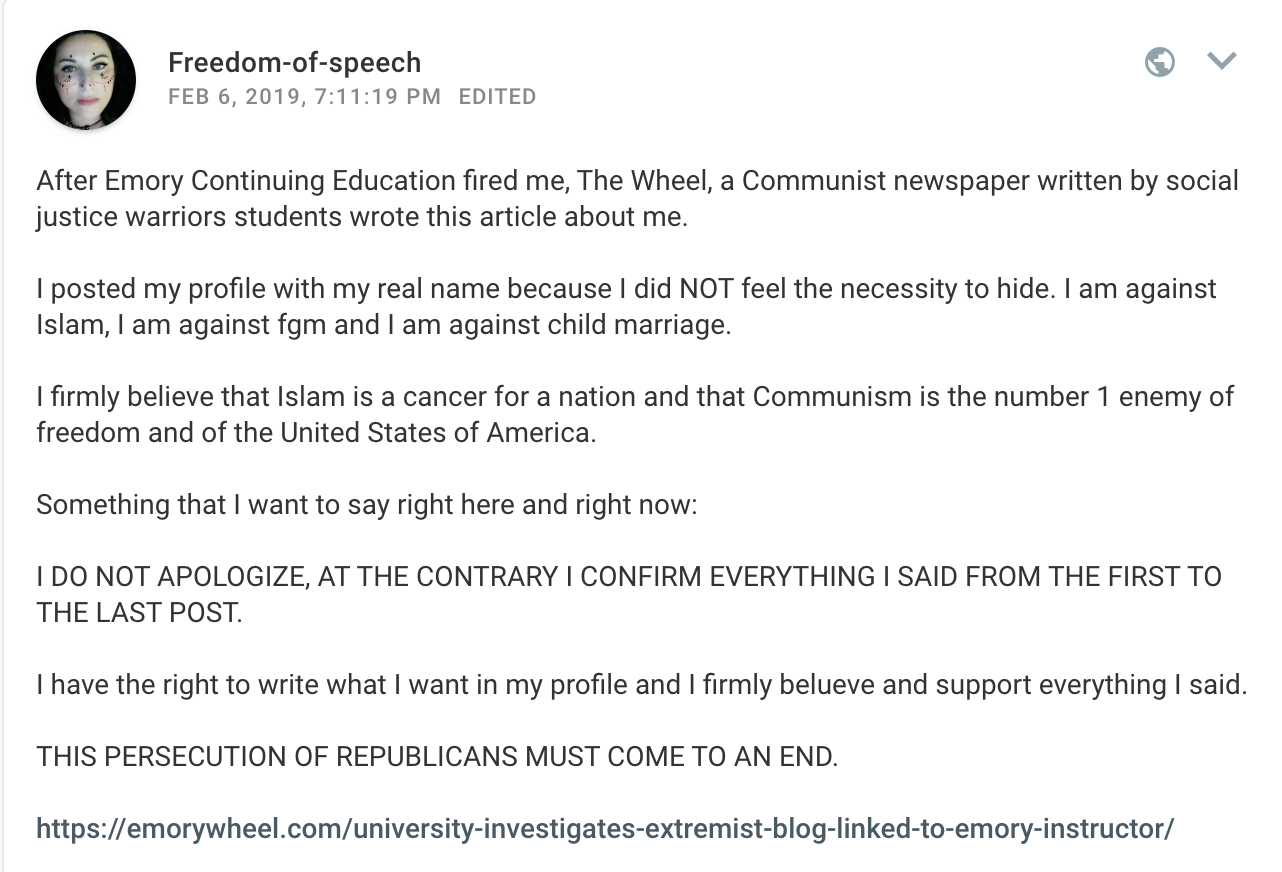 In emails, she told the Wheel she “did not find anything wrong with that profile.”

“I firmly believe everyone should be free to express their point of view,” Corvino wrote to the Wheel. “All the civilization is based on this principle, but [it] seem[s] that you and your buddies … don’t know. What are you guys? Some kind of Social Justice Warriors out there to ‘punish’ who has a different opinion? This is not only anti-American but is also dangerous because people like yourself are prone to persecute others for their ideas. Do you know that this is the seed of tyranny?”

The bio on the minds.com profile reads that the owner is a “real feminist against child marriage, female genital mutilation, acid attacks and against the mysoginist Islamic religion with its persecution, humiliation and disrespect toward all the women of the world.”

Posts on the blog read, “I hate muslims but I am a healthy person” and “It’s only ridiculous this bs nation of islam even exists in America.”

One image that Corvino shared with followers reads, “How do you walk 3000 miles through Mexico ‘without food or support’ and show up at the border 100 lbs overweight with iPhones?”

The profile had more than 3,100 subscribers and 1.1 million views as of Tuesday night.

Corvino teaches Basic Italian Grammar and Italian Opera Appreciation at Osher Lifelong Learning Institute (OLLI), a program located at Emory’s Executive Park campus. The program allows adults to earn a certificate for “professional development,” instead of a traditional diploma, according to OLLI’s about page. She also teaches classes in Dunwoody and Midtown Atlanta, according to her teaching website.

“This is appalling and disgusting that a school that has so much to offer all races has disgusting openly racist people … in their classrooms working with minority children,” Burns wrote. “This will not be tolerated by people who are tired of this racist rhetoric.”

ECE Program Manager Jeffery Alejandro did not respond to the Wheel’s request for an interview.

ECE is not affiliated with the Emory College of Arts and Sciences’ Department of French and Italian.

Update (2/6/19 at 11:02 a.m.): Laura Corvino is no longer affiliated with the Emory Continuing Education program, Vice President of Academic Communications Nancy Seideman wrote in a Feb. 6 email to the Wheel.