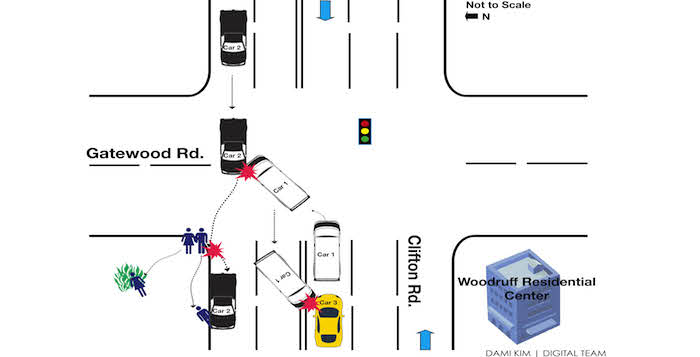 Two Emory students, one male and one female, were struck and seriously injured Tuesday morning when two cars crashed at the intersection of Clifton Road and Gatewood Drive and veered onto a nearby sidewalk where the two students were standing, according to a Sept. 23 University press release.

The two students injured in the accident were immediately transported to Grady Memorial Hospital, according to local news outlet CBS 46. Out of respect for the victim’s privacy, the Wheel has chosen not to release the names of the students and their updated conditions at this time.

According to the DeKalb County Police incident report, a vehicle took a left turn onto Gatewood Drive on a red light and collided with another vehicle. The vehicles were thrust off the roadway and collided with the two students who were standing on the corner of the sidewalk. The male pedestrian ended up under the second vehicle after being thrown up in the air. The female pedestrian was thrown into the air and landed in bushes nearby.

Goizueta Business School junior Zeena Lattouf was driving down Clifton Road when she saw the accident at the intersection.

She said she noticed a car swerving across the road, ending the eventual collision. Lattouf added that she saw the male on the sidewalk run away from the car before he was hit, and he tumbled as the car drove over him.

“After the initial shock of screaming in my car, the first thing that came to my mind was to call the police,” Lattouf said.

Right after the accident occurred, Lattouf said that a fire truck that she believed was standing by and not initially responding to the incident happened to pull up to the accident on its way to the fire station located across from Emory Point on Clifton Road.

Ed Rodgers, whose car was struck in the incident, told CBS 46 that a black SUV struck the students and “one guy flew about 15 feet” and “another girl got knocked into the bushes,” although Lattouf disputes that the male student was actually thrown that far.

College sophomore Shoeb Lallani said he saw the accident while he was walking.

“[The car] had a massive dent on the driver-side door,” Lallani wrote in an email to the Wheel. “The car was on top of the curb on the right side of the road in front of the Biology building. The door was completely collapsed onto the seat of the driver.”

Lallani added that he saw a young woman on a stretcher being treated by paramedics.