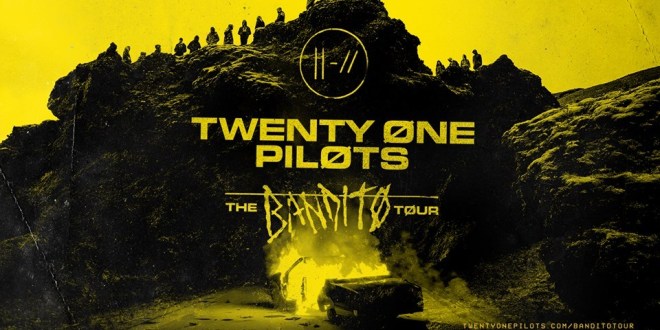 On the final leg of their “Bandito Tour,” indie-pop band Twenty One Pilots stopped in Atlanta on Oct. 12 to entertain audiences with burning cars, confetti and mosh pits.

The “Bandito Tour,” named after the rebel group referenced in their musical lore,  promotes their newest album, “Trench,” with a setlist spanning songs from the title album and older hits such as “Tear in My Heart” and “Stressed Out.”

Beginning their concert with “Jumpsuit,” the Ohio-based band set the tone with a burning car on stage, a reference to the music video for the song. A collection of enthralling performances followed this insane opening. This was not only because of the unique and thoughtful set pieces but also due to the duo’s lively performances. Their vigor was especially potent during the song “Car Radio,” when lead singer Tyler Joseph climbed up on a pole to hype up the crowd. The band ended with their song “Trees,” which included a bass drum performance by Joseph and drummer Josh Dun, along with an explosion of yellow confetti. The yellow confetti was also a reference to the “Jumpsuit” music video. The contrast between new life found in “Trees” and the destructive energy of “Jumpsuit” provided spectators with a satisfying finale.

What stood out most about the night was not only Joseph and Dun’s charisma but also the support coming from the audience, who actively cheered and participated during the show. All across the arena, fans were adorned in camo jackets and yellow duct tape, the attire of the Banditos. Supporters formed mosh pits and held the band members above their heads as the duo crowd surfed multiple times throughout the night. Some fans even waited days to make sure they would be in the front of the pit, proving the dedication of Twenty One Pilot’s fan base. While Twenty One Pilots made the show exceptional, the fans brought the concert to a new level.

New York-based indie-pop band MisterWives opened the night, providing an exciting performance with their invigorating music accompanied by their floral set decorations. While they played music primarily from their albums “Our Own House” and “Connect the Dots,” they also offered a surprising cover to Lizzo’s hit song “Truth Hurts.” MisterWives opened with a rush of energy and set the tone for the rest of the enthusiastic production.

From Joseph’s canorous vocals to Dun’s fast-paced drum solos, the talent possessed by these two was clear throughout the night. That talent, mixed with the colorful stage design and expressive crowd, proved to be another success for the “Bandito Tour.”

Twenty One Pilots will be on tour until Nov. 9, with their final performance in Tulsa, Oklahoma.