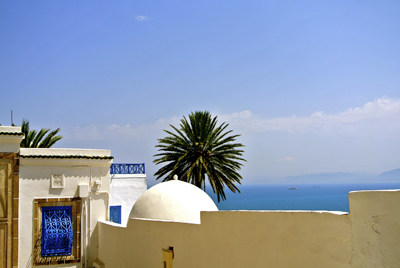 You might know of Tunisia, located just south of Italy on North Africa’s Mediterranean coast, from the negative press it’s been receiving recently due to political turmoil and instability. However, there’s a lot more to Tunisia than its political problems. Tunisia’s Mediterranean climate, ancient history and stunning beaches continue to attract tourists today.

Similarly to its North African and other Mediterranean neighbors, Tunisia has a history of invasions and foreign influences that have all impacted its people and history, including Arabs, Berbers, sub-Saharan Africans, Turks, Phoenicians, Greeks and Punic/Vandal tribes that came from northern Europe. The most common ethnic and cultural mixture in Tunisia is composed of Arab, Berber and sub-Saharan African elements. The last foreign invading power in Tunisia was the French, who have left an important linguistic as well as cultural influence on Tunisia. Tunisia’s French colonial past is very visible in everyday life.

French, along with Arabic, is an official language in Tunisia and is widely spoken. Tunisian cafÃ© culture is another example of the French legacy in Tunisia, with French-style cafes found all over the country.

After the nine-hour flight from the States with my family, it was a relief to finally be in Tunisia. As soon as we cleared customs and left Tunis’ “AÃ©roport International de Tunis-Carthage,” we were greeted by the scorching Mediterranean heat, one of the downsides of going to Tunisia in July. Our taxi driver took us to our hotel in the beachside town of “La Marsa”, located about 25 minutes outside of the Capital. On the way to the hotel, our taxi driver Abdul (a middle aged Tunisian man), explained to us how Tunisia’s political instability had taken a toll on tourism, and that a few years ago, Tunisia was a much more popular destination.

Although there was a nice stretch of sandy beach, the main highlight of staying in La Marsa was its proximity to popular attractions like Sidi Bou Said and Carthage. We spent our first full day in Tunisia exploring the charming seaside town of Sidi Bou Said, a quaint Mediterranean village named after a Sufi Saint. As soon as we arrived in Sidi Bou Said, aggressive shopkeepers began asking us where we were from and attempted to lure us into their stores that sold various Tunisian handicrafts such a ceramic goods and hookahs. Sidi Bou Said is stunning with its blue and white houses, flowers, palm trees, cobblestone streets and views of the Mediterranean sea. It had a real Greek island feel to it and resembled the whitewashed houses of Mykonos and Santorini. It was a pleasure getting lost in the windy streets of Sidi Bou Said, even though, when lunchtime came around, we had a hard time finding a restaurant that was open due to Ramadan (observed by Muslims all over the world as a month of fasting). Then, we decided to take a taxi to the neighboring town and we were able to find a traditional French cafÃ©.

The city of Tunis itself is not as impressive as the sights on the outskirts of the city. However, a trip to the souk (“market” in Arabic) was interesting, as the souk in Tunis is one of the oldest markets in the Arab world. The souk was full of interesting sights and scents, from baklava to hookahs to fake designer handbags. It’s not unusual to haggle and look for a bargain, because although aggressive, the shopkeepers tend to be flexible with their prices.

After exploring the medina and souk in the old part of Tunis, we went to learn more about Tunisian history at the Bardo Museum. I found the Bardo Museum to be fascinating; it had a complete exhibit of Roman statues and remains of Roman ruins in Tunisia that have been preserved, as well as artifacts from the Ottoman period.

The highlight of my trip to Tunisia was definitely our visit to the ancient city of Carthage. The Phoenicians (who came from what is present day Lebanon) established Carthage. Home to the famous “Hannibal” who served as its general, Carthage was an important economic and political powerhouse in the Mediterranean, and the inhabitants of Carthage had constant interaction with the Romans and Greeks.

Carthage, located on a cliff looking over the Mediterranean Sea, is an archeological site comprised of the ruins of ancient baths, a Roman amphitheater and various statues. Next to the archeological site there is a museum, which explains more about the history of Carthage. Learning about the history of Carthage helped me appreciate Carthage much more, and the museum had several maps, artifacts and artwork of the ancient inhabitants of the city.

It’s sometimes difficult to believe that such a small country was home to so many ancient civilizations and has contributed so much to the history of the Mediterranean world.

Tunisian people are faced with a constant battle between traditional and conservative Islamic values alongside the more liberal Tunisian culture present in the country. I remember leaving my hotel at three a.m. for our five a.m. flight to Rome and seeing men and women drinking alcohol and smoking at cafes and small stalls along the streets, as the rules of Ramadan allow eating during “the night”. Tunisia itself is a paradox between liberalism and conservatism, something that parallels its fascinating crossroads between Europe, The Mediterranean, Africa and the Middle East. Its rich history and fascinating culture make it a must on any adventurous traveler’s list.