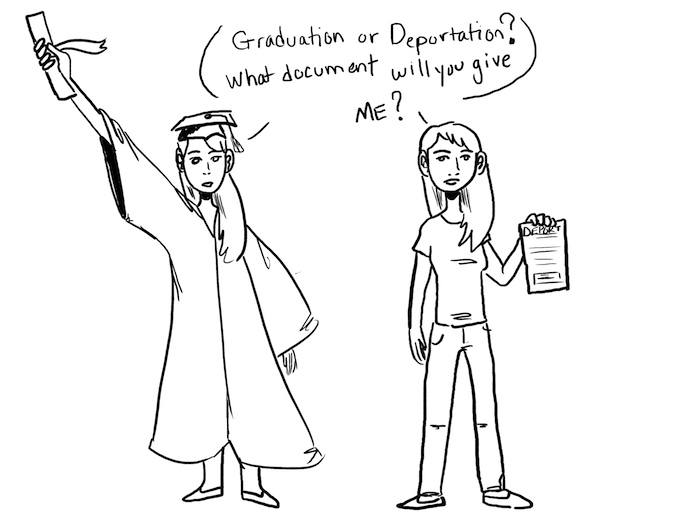 Immigration became a hot topic again this summer when national headlines proclaimed abuses at the border. Although the discussion of immigration reform has been ubiquitous in the media for the past few years, neither Arizona’s notorious racial profiling bill, SB 1070, nor the reform bill that died the in House in summer 2013 drew as much attention as the recent unaccompanied minor crisis.

Prompted by the public’s reaction to this humanitarian crisis, President Barack Obama declared that he would take executive action to reform the immigration system. However, progress has again been delayed, and we will see no reform at least until after the Congressional elections this November.

Our broken immigration system negatively affects millions of people. During his 2014 Emory commencement speech, American politician and civil rights leader John Lewis drew special attention to the issue and illuminated parallels between the injustices facing the African American community in the U.S. Civil Rights Movement and the injustices facing the undocumented community today. It may seem as if these injustices do not affect Emory’s community directly, but in reality, our failing immigration system deeply impacts access to higher education, especially in our own state of Georgia.

All children in the U.S. are guaranteed a free public education unmitigated by legal status. However, undocumented individuals are not guaranteed access to higher education. In Georgia, the Board of Regents Policy 4.1.6 bars undocumented students from the top five public universities and further prohibits their access to in-state tuition rates at all other public institutions of higher learning, even if students meet residency requirements in Georgia. The state has particularly harsh immigration policies regarding undocumented youth and also falls into a broader trend whereby the only states in the country to ban undocumented youth from higher education are located in the South.

Undocumented immigrant youth, some of whom identify as “Dreamers,” in reference to the DREAM Act, have organized to challenge the barriers hindering their access to education.

Some are recipients of Deferred Action for Childhood Arrivals (DACA). DACA is a 2012 memorandum issued by the Obama administration that provides qualified undocumented youth with a two-year, renewable deferred action status that allows them to receive temporary work permits and driver’s licenses. Many Dreamers are graduates of U.S. high schools with excellent transcripts and college-ready rÃ©sumÃ©s detailing hours of community service and hard work. A substantial number of Dreamers have grown up in the U.S. and are active, contributing members in their communities. Yet solely because of their immigration status, these young people face significant barriers in accessing higher education.

Despite impediments, undocumented youth have bravely challenged the unjust laws they face and continue to fight for their rights, notwithstanding threats of arrest and deportation. Dreamers have mobilized across the nation forming associations, such as the Georgia Undocumented Youth Alliance (GUYA). They have engaged in collective action and taken inspiration from the students who successfully desegregated higher education in Atlanta during the Black Freedom Movement. Other community members in Georgia have also organized.

One such example is Freedom University. Drawing on the example of Southern Freedom Schools, a team of active University of Georgia professors founded their own underground school called Freedom University. Freedom University provides undocumented students free college-level classes, leadership development and college application and scholarship assistance to attend out-of-state institutions that do not discriminate based on documentation status. Some Dreamers have also participated in acts of civil disobedience. In November 2013, two Dreamers were arrested for disrupting a Georgia Board of Regents meeting and in May 2014, nine people were arrested, including three Dreamers and six community allies, for civil disobedience in opposition to the ban.

The Georgia Board of Regents’ Policy 4.1.6 does not impact the admission policies of private institutions. Emory, for example, has the ability to admit undocumented students, and does, but erroneously recognizes them as international students, therefore requiring them to pay full tuition rates. Because undocumented students are not eligible for federal financial aid and often come from low-income communities, they are effectively banned from private institutions, like Emory, due to financial restrictions.

This admissions policy does not represent how Emory’s own faculty, students, staff and alumni have responded to the growing immigrant community in Atlanta. In the past, there have been service-learning classes focused on studying immigration in Atlanta and requiring volunteer work in the immigrant community. In 2012, John Latting, Emory’s dean of admissions, chaired an admissions panel about Latinos in higher education.

In fall 2013, Emory hosted a presentation by Sonia Nazario, the Pulitzer Prize-winning journalist and author of Enrique’s Journey, an odyssey-like story that describes the trek of a Honduran boy voyaging to the U.S. in hopes of finding his mother. During King Week 2014, the Center for Creativity and Arts hosted a conversation between civil rights leader Bernard LaFayette and Freedom University professors and students at the Schwartz Center for Performing Arts.

Additionally, every summer, the Emory Scholars summer program Scholarship and Service travels to Americus, Georgia, where students meet detainees in Stewart Detention facility, a privately owned and operated facility where undocumented men are detained for months as they await their immigration hearings. Furthermore, two Emory alumni now serve as professors at Freedom University teaching music, photography and human rights. There are groups and individuals at Emory that facilitate discussion and education about the factors negatively affecting Atlanta’s immigrant community. However, as a private institution, Emory has the opportunity to do more.

Emory should fulfill its mission of “applying knowledge in the service of humanity” by taking its place amongst other institutions of higher education as a school that admits students on the basis of academic merit, not on social status. Emory already has a well-established and successful scholarship apparatus, the Emory Scholars Program. Creating a scholarship specifically for undocumented students, particularly for those directly impacted by the ban in Georgia, and widening the Office of Financial Aid‘s definition of need would be the first steps to bridge the ideological gap between the impact of ongoing initiatives of students, faculty and alumni and the impact of the administration’s current policies.

One long-term goal would be to update Emory’s Equal Opportunity Policy that guides the admission process. This policy currently states: “Emory University is dedicated to providing equal opportunities to all individuals regardless of race, color, religion, ethnic or national origin, gender, age, disability, sexual orientation, gender identity, gender expression, veteran status or any factor that is prohibited consideration under applicable law.”

Emory would become a leader in higher education if it included “documentation status” in this clause. The way this clause currently stands allows the University to define and determine an individual’s nationality. Students who have grown up in the U.S. the majority of their lives, who consider themselves Americans, who have only known the U.S. as home can be classified by the University as foreigners. By deciding the nationality of a student, the University also decides the student’s economic requirements for attending Emory. This clause disproportionally affects the immigrant community and discriminates not based on academic merit and potential, but on a status that is out of a student’s control. Emory has an opportunity to support social justice and set a new standard for all institutions of higher education.

In his commencement speech, Lewis described his actions and the actions of his fellow activists as “getting in the way” and “getting into trouble.” He stated that the current immigration system is “not fair” and “not just.” He called on the graduates in front of him, but also on the entire Emory community to “get in the way and find a way to make a way out of ‘no way'” specifically regarding the issue of immigration. Now is the time and now is the perfect opportunity for the student body to “get in the way” and encourage the administration to support the immigrant community and live up to its own ethical standards. As students, we must heed to Lewis’ words; we must “speak up” and “speak out” for our peers, and we must push our University to implement its own ideals and move towards progress.