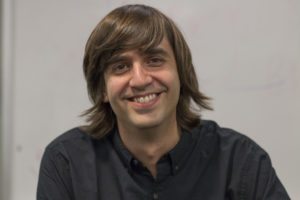 Visiting Professor Fernando Valverde doesn’t speak fluent English, but he said working through that barrier yields a deeper connection with his students. Valverde, whose most recent book, titled “The Insistence of Damage” was a bestseller in 2014 and earned Book of the Year from the Latin American Writers Institute of the University of New York, moved from Granada, Spain, in 2014 to teach Spanish and poetry at Emory.

As he finished his Poetry in Spanish Today class on a Tuesday, he greeted me with a smile and welcomed me into his office. Pictures with famous Latino artists were scattered across the overflowing book shelves. I barely situated myself in the room before he asked if I wanted a tea, as a conversation always merits one.

Valverde said that he loves being in an environment where poetry is studied and appreciated. He considers Emory a “center for poetry” and is inspired by interactions with poets he looks up to such as Natasha Trethewey, Jericho Brown and Kevin Young.

He attributes his difficulties with the English language to his poetic nature. Valverde relies mainly on his ability to speak Spanish as he is most comfortable using that language.

“I am always trying to search for just the right word to use in English because in poetry, each word carries so much meaning,” Valverde said. “However, not speaking the same language forces both parties to make an effort to communicate, and that’s where things happen.”

For over an hour, we talked and sipped our tea as if we had been friends for years. Valverde  admitted he adopted his kind, relaxed attitude from two female role models in his life: his mother and grandmother, who he said mostly raised him.

“My grandmother was the first one who gave me a book,” Valverde said. “I owe everything to these two magnificent women. They have given me my ‘emotional’ education if you will, and I think, and probably, owe the fact that I am a poet to them.”

Valverde’s books have been translated into other languages,  and his last book, published in 2014, The Insistence of Harm, was named Book of the Year by the Latino American Writers Institute of the City University of New York.

“I was seventeen years old when I discovered poetry,” Valverde said. “I never thought it would become something permanent in my life, but I became entranced by the universality of it; that one can write something and it became a sort of message for the world.”

Valverde compares the discovery of poetry to an early childhood memory.

“Poetry is like stepping onto an airplane for the first time as a child. You’re there staring out the window and you see the whole world in front of you. It’s fantastic. I think the reaction that your first poem evokes from you is like sitting on that airplane,” he explained.

This feeling, he said, is something he wishes to impart to his students. College freshman Ross Greenberg said that he appreciates the experience Valverde brings to the classroom.

“Valverde combines his knowledge of Spanish literature and poetry and full immersion in order to create an optimal Spanish class experience,” Greenberg said.

In addition to writing poetry, Valverde has also dabbled in writing flamenco music—and not without success. In 2014, he was nominated for a Latin Grammy for a collaboration with famous flamenco singer and friend Juan Pinilla. While Pinilla performed the music, Valverde wrote the lyrics for their album ‘Playing With Fire”

“There is music in poetry and poetry in music,” Valverde said. “I got together with [Juan] and we started recording. I wrote the lyrics, he wrote the music. The album did well in Spain but I never expected anything from it.”

Though the duo did not win the award, he said it was an incredible experience.

“It was very emotional. I got to meet all of the Latin stars, Juanes and Carlos Vives. It was crazy, I was among the nominated! It was a great opportunity. And even though I haven’t done anything else with music, I still get to vote every year on the nominations. I had to be inducted into the Academy as a lyricist. Can you believe that, a poet in an academy of music?”

The nomination was not the only award Valverde has earned. Valverde has also won the XXI Andalucía de la Critica Award.

Valverde said that although he is more focused on the impact he is making, he is grateful for the opportunities that these accolades have brought him. The poet met various people that he otherwise might not have; he’s even had lunch with renowned literary critic Harold Bloom. Valverde said he was surprised by the impact his work could have.

“I didn’t know my poetry could reach so many people,” Valverde said. “That so many people from remote areas had read my poetry impacted me more than the result of the voting. I thought I wrote for a limited audience, but at that moment I discovered that even if I write for a small group of people, those people are scattered around the world.”

Although he has had the opportunity to meet celebrities and has received  awards for his poetry, Valverde humbly remarks that he does not think of himself as greater than other poets — rather, he considers himself an ordinary person.

“I write poetry from a normal person to normal people,” Valverde said. “Oftentimes, poets make poetry too complicated for a regular person to understand. I try to give it back to the people. I try to use a language that, without abandoning the poetic expression, can be understood by the readers.”

This interview was conducted in Spanish and translated to English. 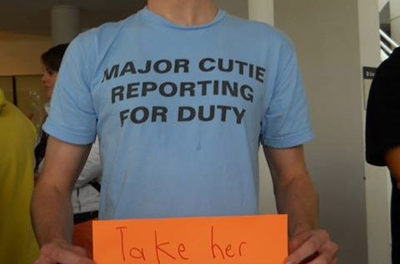 Would You Be a Bystander?