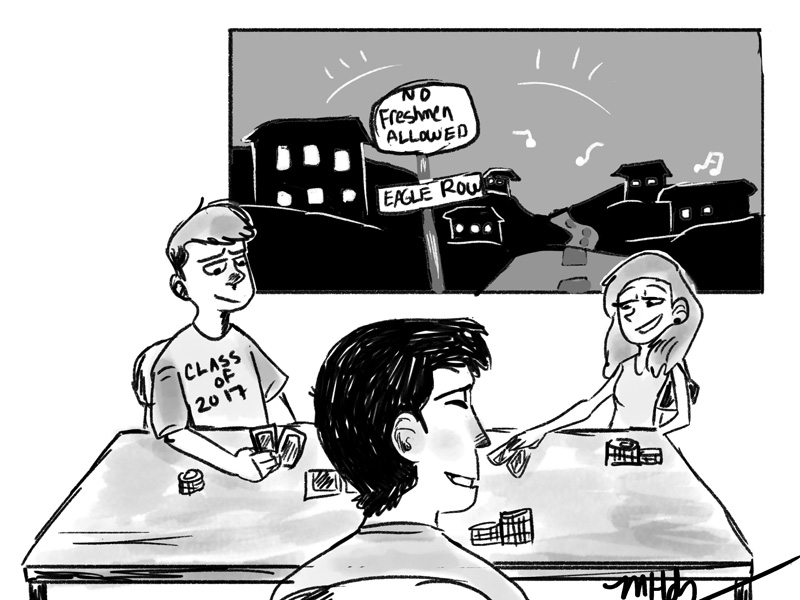 There’s some kind of forbidden allure to Greek Row that calls to freshmen those first few weeks of college.

I was never one to drink or party, but those first few days on campus – wow. The fact that Emory had so explicitly forbidden being on Eagle Row made me wonder what sweet secret they were protecting, so that many a late and idle night, I found myself wandering on its far fringes, marveling and ogling at those inebriate fellow students stumbling joyfully back home. It was the cool thing to say as a freshmen in those times, most casually with an air of indifference, “Yeah, well, I’m going to frat row tonight.” And then you’d feel your gut tighten, and everyone would wonder if perhaps they’d gather the courage to tag along and maintain equal social status.

A lot was done in the name of social status. It’s a big deal for freshmen, especially for those who have found themselves largely alone in a world that has been turned upside down, and they frantically sort themselves out into the social strata that comfortably reflects high school.

Of course, once the “freeze” is lifted, the mystery is lost, and the thrill seems to die. I slowly grew to hate frat row, including its noise, commotion and the unconscious and semi-conscious bodies it left strewn in its wake.

Alcohol and poetry seem to have been invented by every major civilization. Even meso-America, before Columbus, had pulque. It’s undeniable that it appeals to something deep inside us, but who of us who graduate from Emory will look back on four years of blackouts and hangovers and think, man, I wish I remembered less of college? What you will regret is a lack of courage and not trying new and exciting things, which these days is actually studying and making the most of your $250,000 worth of education.

There are other ways to have fun, my friend with the pirate hat explained to me. Like drinking tea, a well-known diuretic, with a friend. The first one to wet his pants loses. Great advice. He’s an sophomore advisor this year, but who’s surprised?

The residents of McTyeire can expect to remain largely sober, though I’m sure the building’s existential crisis would drive anyone to drink.

Then there’s the classic game of water pong (defined by Urban Dictionary as “a revolutionary take on beer pong”), popular among conservative Christian circles.

I’m a little more liberal, so I’ll advocate Kool-Aid. Drugs aside, there are plenty of things to do late at night on campus. Woodruff residential has a nifty little cafe, for all you freshmen boys competing to see who uses the most of their unlimited swipes. My friend and I plotted on how to scale the belltower but only ever got around to the Burlington Road Building. And yes, there are movies to be watched and popcorn to be popped.

I propose that Emory try some new tactics to keep freshmen out of the wine racks.

Shock therapy needs to be our first choice, obviously.

Another equally brilliant idea is to hide frat row for the beginning of every fall. That’s right, relocate the buildings somewhere less obvious, like out by J-Wag’s place.

Of course there are frat boys who, desperate for flocks of unsuspecting freshmen eager to test their drinking limits, will probably shoot off flares, sending that idea up in flames.

Back to shock therapy, I guess.

But seriously, what about a bunch of inflatable bouncing houses doused in vodka and with ridiculous dress stipulations? Just set them up on McDonough with a big sign in crayon reading: “Frat Row: Coolness Here.” Even the upperclassmen would confuse it for the real thing.

Heck, you might have some frat boys get lost looking for their frat house.

Jonathan Warkentine is a College sophomore from Almaty, Kazakhstan.