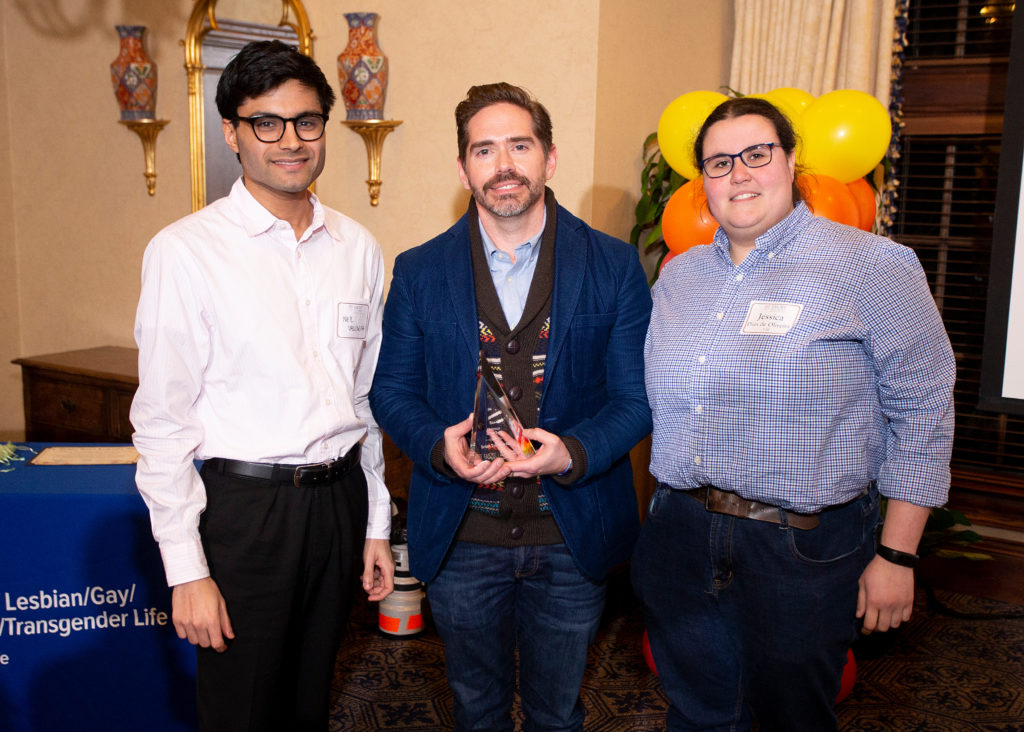 Brian Tolleson (center) accepts the 2019 Emory PRIDE Alumnus of the Year award, given by the Emory Office of LGBT Life./Photo courtesy Megan Pendleton.

When Brian Tolleson (95C) first came to Emory, he, like many students, wanted to become a doctor. However, like many pre-med students, he soon encountered a hurdle that would impede his plans: organic chemistry.

“I was definitely, definitely pre-med. Medical school was just going to happen,” Tolleson said. “I was so bad at organic chemistry that I just stopped going.”

On April 14, 2019, Tolleson came to speak at Emory after receiving an invitation from Raoul Hall Sophomore Adviser Prasanna Kabur (21C) as part of a personal growth program for residents. He reminisced about how the University shaped him into the entrepreneur he is today. Tolleson was recently made  a 2017 honoree of the Emory Entrepreneurship Network and 2019 Emory PRIDE Alumnus of the Year.

Soon after, he began searching for another career path and took a class called “Proprioceptive Writing” that introduced him to his passions of writing and entertainment.

“My whole life has been about running towards something I was definitely going to do, like being a doctor, and then being honest [with] myself that this was a mistake, admitting to the mistake, then changing course,” Tolleson said.

Abandoning the pre-med path was just one of many moments in Tolleson’s life where everything changed. Tolleson said that coming out and accepting that he was gay was another one of these moments. He recalled when the Atlanta Police Department called his parents to tell them that his car was stolen outside a gay bar, which resulted in his parents finding out about his sexuality.

“Basically, the Atlanta Police Department came out to my parents for me,” he said. “This was before they were trained not to do that.”

Tolleson eventually helped kickstart Logo, a round-the-clock channel for LGBTQ+ Americans. After conflicting with the management of MTV Entertainment, he chose to move on from Logo, a decision he said ended up being the right choice. In 2005, Tolleson founded BARK BARK, an advertising company that aims to combine advertising with entertainment.

“It meant a lot to me personally,” Tolleson said. “[Logo was] everything I was as a gay person, as a network, and it was a very different time to launch this network. But I had to make a decision, and my happiness and working with someone I respected meant more than anything.”

Tolleson said that admitting his mistakes and learning to be vulnerable have significantly contributed to his success and to shaping his values and identity. He credited his friends and Emory for teaching him these values and stressed to the audience that learning from mistakes discredits the mistakes altogether.

These lessons of vulnerability have applied beyond his career and into his personal life.

“Being straight was kind of the same thing — I tried to be straight for a little bit, and I realized it wasn’t for me,” Tolleson said to the laughing audience.

After Kabur questioned Tolleson on his childhood, his experience in residence life at Emory and his life mission, Tolleson opened up about a wide range of subjects, including his work at Nickelodeon, his creation of Logo and his work as interim CEO at The National Center for Civil & Human Rights.

“Corporations are the biggest problem in the world right now [and] their influence over everyday life,” Tolleson said. “Instead of trying to fight and defeat them, it’s about making sure those corporations maintain human rights as a core of their system. My life mission is making sure human rights is a part of the conversation.”

Since 2003, Tolleson has worked extensively as an activist, both as CEO for the National Center for Civil & Human Rights from March 2018 to March 2019 and by creating Logo.

Tolleson repeatedly emphasized working from within the system to affect change, a position he leverages almost every day. Tolleson said that all companies need consumers and employers, so affecting change through honesty, authenticity and patience is the best way to fight injustice. In his opinion, this will not happen until Citizens United, the 2010 Supreme Court case that allowed corporations to contribute to political campaigns, is overturned.

At the National Center for Civil & Human Rights, Tolleson helped start the International Human Trafficking Institute, which aims to push corporations to fight and take corporate responsibility for human trafficking within their institutions.

Tolleson has launched initiatives to pressure corporations to compile company phone data into a database that flags numbers associated with human trafficking activity. Employees who make these calls would be fired immediately. He now continues this work at Lexicon Strategies, a public relations company that aids corporations, campaigns and causes through storytelling and character building.

“I felt so validated hearing his story, having pivoted away from the pre-med track myself after taking the MCAT and submitting the composite letter application as a senior,”  Farah Al Chammas (19C) said. “I also realized that influencing consumers through entertainment is actually a powerful tool. Like he said, you got to be in the system to change the system.”

Tolleson also shared about how his personal life and creative work at Nickelodeon grew intertwined over time, explaining that the children’s entertainment industry had some of the most creative people he’s ever worked with. It was also at Nickelodeon that Tolleson said he felt like he was fulfilling his life mission. He loved his work to the point that it no longer felt like work — he held his 30th birthday party at a laser tag arena in Time Square with his co-workers at Nickelodeon.

Bianca Zhou (22C), who is majoring in Film and Media Studies and English and Creative Writing, said Tolleson’s path encouraged her to continue pursuing a career in the arts.

“As a student interested in art as well, I had a lot of moments where I thought about doing one thing and I ended up doing another,” Bianca Zhou (‘22C) said. “It was really reassuring to hear that someone that successful had gone through the same thing.”

Tolleson said that the support from Emory and his professors helped him identify his passions and find his internship, and he maintains a strong Emory network to this day.

As Tolleson achieved much success after graduating, he stressed that every person’s time at Emory is a valuable experience because Emory makes its students much more well-rounded than most other schools.

“You could do anything,” he said. “There were no rules.”