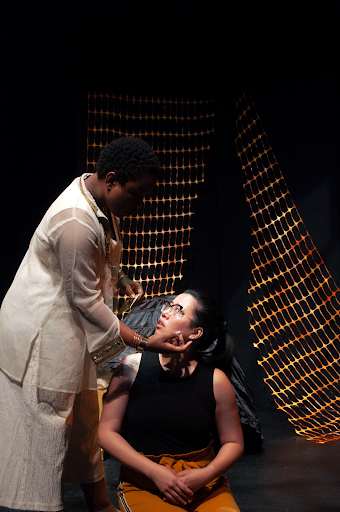 A constant buzzing made of many voices, but only one mind. A great secret hidden in the folds of a hive. Anthropomorphized bees blinded to their truth.

“To Serve the Hive” opens with the premise of a failing queen bee (Emily Musgrove) in denial of her hive’s slow starvation, and members of the hive awakening to hidden secrets, like the collapsing hive.

The play serves as an analogy for the effects of climate change and the struggles of matriarchy, while exploring themes of identity and power play. 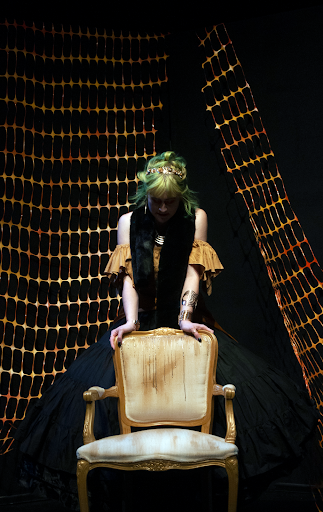 Written by Julia Byrne (20C) and directed by Wanyu Yang (20C), “To Serve the Hive” was presented Aug. 25 and 26 at the Schwartz Center for Performing Arts. The play was a part of SheATL, a summer theater festival featuring work written by “gender-marginalized” playwrights, which showcased four plays from Aug. 18 to 28.

At its core, the play is about the struggle for survival, and survival comes down to food supply — both in the bees world, and our  world. The lack of food leads to starvation, becomes a reason for control and, later, for revolt. The Queen’s need to feed also materializes as desire, setting off a murky power play, a sort of subservience-with-benefits between the Queen and Nurse 1.

Feeding is also significant in legitimizing a Queen’s rule. Carrying forth tradition, Queens eat their predecessors to signify victory and solidify their reign. Afterwards, their power cannot be questioned. This tradition binds together the queens of the past and present, a reminder that they are more connected than they think. 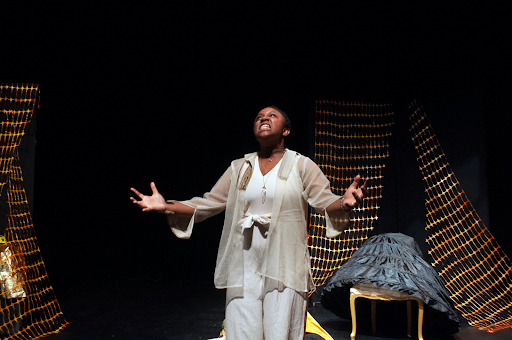 “To Serve the Hive” examines matriarchy through the lens of repression and control. In the hive, queens fight to hold their throne, hardening against even their own kin. The Queen reflects on the prospect of passing down her power, saying, “I have been pregnant since the day I was born — and for what? To give it away?” It is hard not to think about the two-fold burden of shouldering unwanted responsibility and the pressure to fight for it. The play reminds us of cycles and the roles we step into from our matrilineage as the queen bee acknowledges that she takes her mother’s wisdom into her rule.

The play deals with themes of identity and self, and the tension between the individual and the collective. The workers that make up the communal hive have been banned from using pronouns like “you” and “I,” because the Queen fears allowing them free will. The possibility of free will arises when Nurse 1 begins to view herself as a separate entity. She can feel the impact of starvation, yet the others don’t even notice it because they have been commanded not to. The fact that the hive is constantly seeking for more nectar — a bloom “towards the setting sun, farther than we’ve ever flown” — reminds the audience of the limitations of the collective.

The conflicts also represent the effects of climate change because, quite plainly, there is no honey left. As we face our own depleting food and water supplies, we’re left with the same looming question as the hive: What will we do about it?

Another human connection in “To Serve the Hive” is the shielding of information for political gain and personal motivation, manifesting in the Queen’s pride and appetite for selfish power and to sustain her reign. Nurse 1 resists this, exercising her newly discovered personal freedom to push for truth-telling and transparency by passing on the information, and even appealing to the Queen herself.

From left to right: Indya Bussey as New Queen and Si Chen as Nurse 1. Courtesy of Wanyu Yang.

The use of catchy refrains like “may the honey flow” helped to form the hive chorus, and the rhythmic dialogue added to the sense of cycles and repetition.

Movement — coordinated hand and head gestures, as well as simple formations in conjunction with black and gold costumes — brought us into the world of the play. And the symbolic props, such as the sheet used to represent the hive exterior and a sheet of crumpled plastic for water, were minimalistic, allowing the focus to remain on the movement and use of space.

Through its strategic humor, the play highlights the absurd aspects of the human condition — for instance, the way we view pleasure and desire. In trying to understand it, Nurse 2 describes the Queen’s desire as “non-reproductive pleasure.”

It takes the entirety of the play for Nurse 1 to realize that her desire for the well-being of the hive makes her a true leader. Left to deal with the consequences of two dethroned and deceased queens, the two Nurses are sent spiraling as they attempt to define their roles. They list out synonyms for leader, until inevitably, Nurse 1 lands, quietly, on “queen.” This seemed to be a hopeful promise to redefine the role of queen and to realize the ways the title could be used for the good of the collective.

One of the final lines of the play is a direct plea to the audience: “Go, and eat and be your body. Be free and full.”

It is a reminder to nurture not only our bodies, but also the nature that surrounds it — and to remember that they are connected, like a hive, always buzzing.

The bloom is still out there, Byrne insists. It’s up to us to find it. 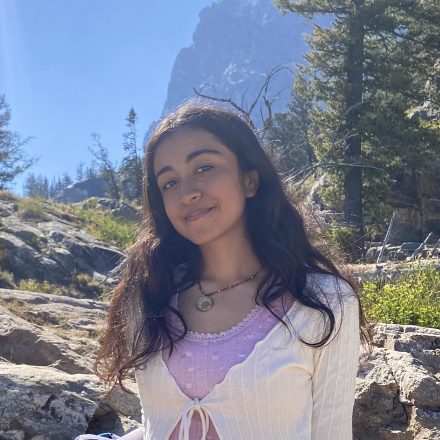