To see or not to see: The ongoing debate of displaying mummies at the Carlos Museum 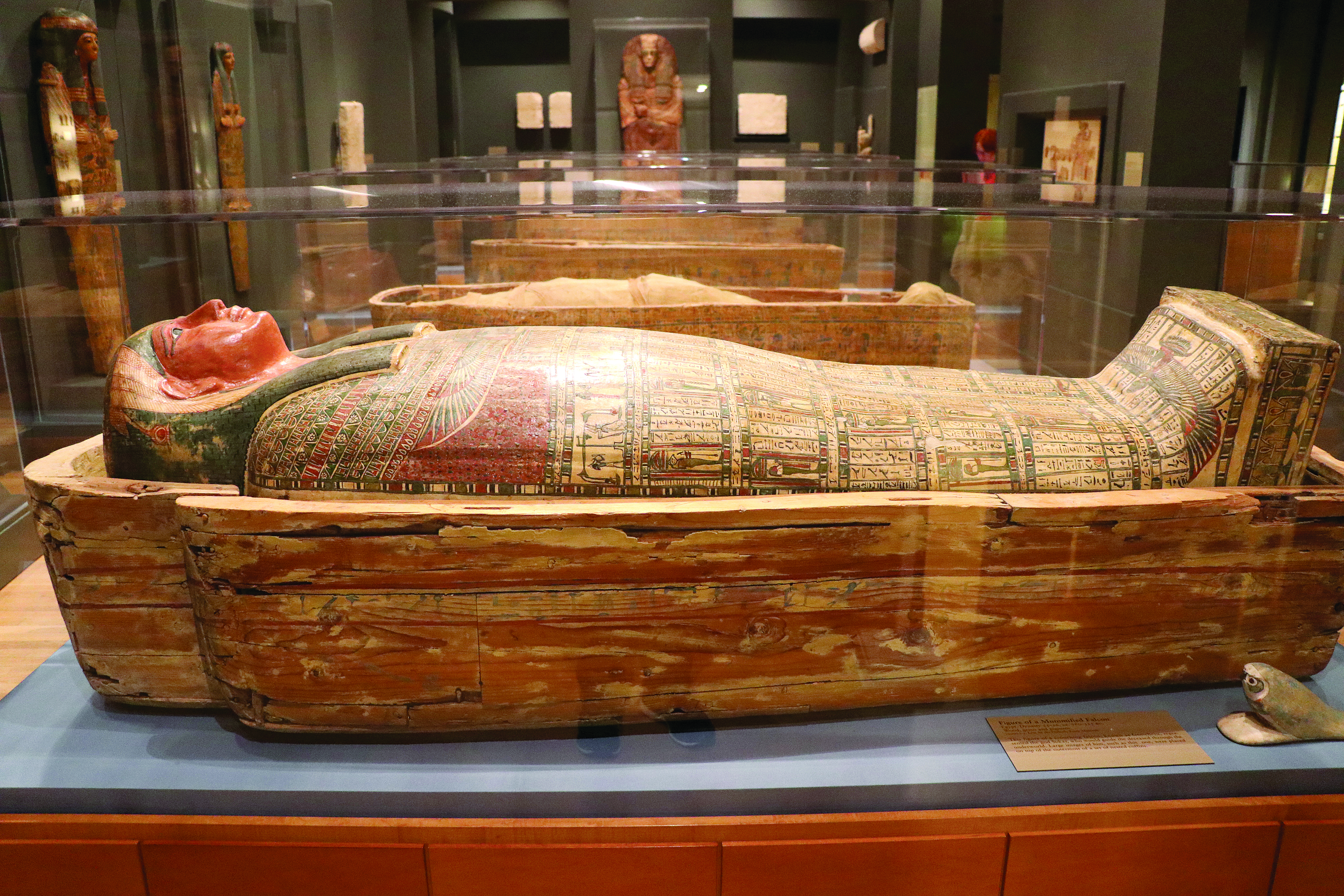 If you walk into the Carlos Museum, take a left. Walk through ancient Rome, past the mosaic panels on the wall and classical marble statues. Follow the map at your feet through the Mediterranean Sea, and wind your way up the ramp through lower Nubia then upper Nubia. Wander along the Nile River to where it forks, turn left and you have arrived.

But maybe you wish I hadn’t directed you here. The location of the museum’s graveyard: the Egyptian mummy exhibit.

The ethical debate over displaying human remains is a long one. Some scholars argue that it contributes to science and education while others say it is morbid and shows the continuation of colonialism — displaying ancient cadavers like painted pots or excavated artifacts. 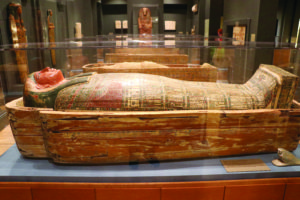 This all boils down to one simple question: Should you be able to walk into a museum and stare at mummies at all? Some American museums are reconsidering the practice of displaying mummies. The Rhode Island School of Design Museum in Providence decided to put “Nesmin,” the mummy of a Ptolemaic priest, back in his coffin after rethinking the idea of exhibiting human bodies. The recent Black Lives Matter movement has only catalyzed the mummy debate by emphasizing ideas of cultural ownership and modern-day impacts of colonialism.

It is a debate the Carlos Museum has recently engaged in, installing warning signs at the entrance to the Ancient Egyptian, Nubian and Near Eastern Art gallery after lengthy discussions both within the Emory community and at peer museums and national organizations such as the American Alliance of Museums.

“The carefully considered decision to add this signage aims to respect the museum’s diverse audiences and to create a welcoming and comfortable environment for all of our visitors,” said Sarah Jones, director of marketing and communication for the Carlos Museum.

The practice of collecting mummies started long before the Carlos Museum opened on Emory’s campus in 1919. “Egyptomania” dates back to a Renaissance fascination with Egypt, and Europeans started importing mummies as early as the 13th century. But the hysteria for Egypt truly skyrocketed in 1798, when Napoleon invaded the country and introduced Europeans to the wonders of the ancient pyramids.

Egypt soon became a highly sought-after tourist destination. “Mummy unwrappings” became popular spectacles in 19th century Britain, and curiosity shops were filled with the funerary jewels that were unrolled from the bandages. In 1922, Egyptomania seized the world once again with the discovery of Tutankhamun’s tomb. It was around this time that the Carlos Museum acquired its first set of mummies.

William Arthur Shelton, a professor in Emory’s Candler School of Theology, led an excavation through Egypt and the ancient Near East in 1920. His first purchase for the University – The Old Kingdom mummy from Abydos, Egypt — is the oldest mummy in North America and now one of the most prized pieces at the Carlos. A second group of mummies was acquired in 1999 from the Niagara Falls Museum in Canada.

The decision to install warning signs did not start in the Egypt wing of the Carlos Museum. It began with the museum’s newest exhibition, “Each/Other,” created by Indigenous American artists Marie Watt and Cannupa Hanska Luger. During discussions about the exhibit, the Carlos Museum received advice from the Community Advisory Committee, which is made up of both Native American and non-Native faculty, staff, students and community members.

“We wanted to take steps to be inclusive and welcoming for those Native American visitors who do not want to be in the presence of wrapped Egyptian mummies or who want to prepare themselves before entering spaces holding them,” said Megan O’Neil, faculty curator of the art of the Americas for the Carlos Museum.

To address different cultures’ diverse views about death and the dead, the museum worked with the exhibition design team to create and display signs so that visitors would have sufficient warning before entering both the museum and the Egyptian galleries.

However, the two differ in their exhibition and the regulations surrounding them. You won’t find Native American remains on display in the Carlos Museum and are unlikely to do so at any American museum for that matter. Peaking in the 19th century, collectors in the United States fixated on Native American skeletons, studying skulls in an attempt to prove that Anglo-Saxons were racially superior. In the name of science and preservation, white Americans pillaged and plundered Native American graves.

Some scholars argue that there is no difference between Egyptian and Native American remains. Europeans collected Egyptian mummies with the same ideas of colonialism and orientalism as they did with Native American skeletons. Others, such as the Carlos Museum, see the two issues as distinct.

“To the ancient Egyptians, mummification transformed a corpse into an eternal, perfect body,” said Melinda Hartwig, curator of ancient Egyptian, Nubian and Near Eastern Art for the Carlos Museum. “The mummy in its decorated coffin or cartonnage was intended by the ancient Egyptians to be seen and remembered. Modern Egyptians take pride in their mummies and display them in state-of-the-art facilities such as the National Museum of Egyptian Civilization.”

At the Carlos Museum, the Old Kingdom mummy is displayed alone without a sarcophagus, unlike the other mummies.

“We do not place mummies in a coffin other than their own,” Hartwig explained. “The Old Kingdom mummy entered the collection with the remains of its original wooden coffin and is displayed resting on it.”

Indeed, how to display mummies, if they are to be displayed at all, raises many of its own questions. Should mummies be displayed in coffins or out? Should the lid be kept on or off? For the Old Kingdom mummy, the Carlos Museum based its decision on the specifics of the mummy and its interest to Egyptologists, scientists and museum visitors.

The notion of removing the Carlos Museum’s mummies from display altogether is complex. The museum attracts more than 75,000 visitors each year from around the world, many of whom come to view the mummy collection. The Senusret Collection, featuring approximately 1,500 items, including a mummy and multiple associated funerary objects, is one of the most extensive collections of ancient Egyptian and Near Eastern artwork held by a U.S. museum.

“The Carlos Museum continually assesses the respectful display of mummies with the research needs and interests of modern scientists, scholars, students and museum visitors,” Hartwig said. “The museum is committed to the respectful curation of wrapped mummies using the highest standards of ethical and professional practice.”

Although the issue of whether and how to display human remains, and in particular, mummies, is an ongoing conversation at the Carlos Museum, installing signage is one small acknowledgment of the ethical concerns raised by such exhibits. 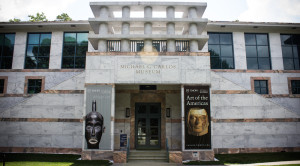 This article was also made into an episode of our podcast Wheel Talk. Listen on all podcasting platforms. 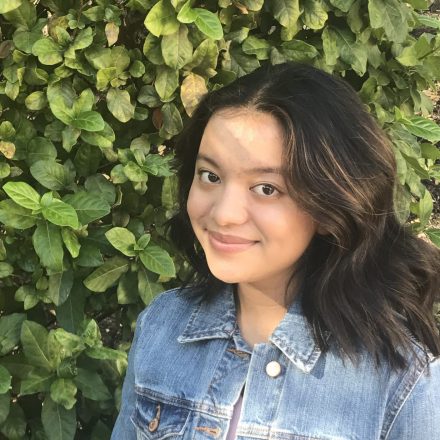