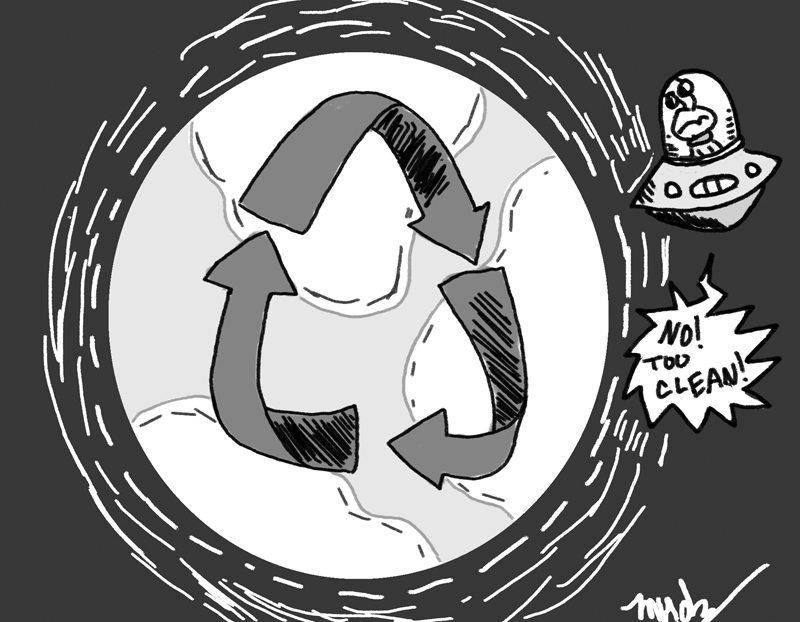 I was pleased to spot College junior and Wheel staff writer Rhett Henry’s editorial entitled “The True Meaning of Sustainability” appear in the Sept. 19 edition of The Emory Wheel.

As I began to scan the lines, I was hoping to read something inspiring. Instead, while I agreed with some of Henry’s analysis, his outright dismissal of the sustainability movement as superficial is entirely non-constructive. He failed to capture the dynamic and exciting processes of change that we can see all around us.

Henry’s biggest gripe with the sustainability movement is that “Sustainability does not question capitalism or its associate consumerism.

So long as the workplace is lit with low-energy bulbs and low-flow toilets, who cares that the worker is still tied to a hellish wage system?” he asks rhetorically.

This critique takes a very narrow definition of sustainability and is quite incorrect in its appraisal of some of the actors of and actions in sustainability.

Firstly, Henry explicitly states that “[a]s it is understood, ‘sustainability’ is a move towards creating ways in which society may persist and develop in a way that is sustainable for both society and the environment” (emphasis is my own). However, he still seems to think that issues of a sustainable society do not enter the thoughts or the discourse of those pursuing sustainability.

While this might be true for some, he would not have to look far to see just how many people do care “that the worker is still tied to a hellish wage system.” Scores of people are questioning the structure, are working tirelessly to find alternatives and are, in the name of sustainability, shining the spotlight on social justice issues like worker rights. A number of Emory faculty and students, for example, are involved with the Coalition for Immokalee Workers (CIW), whose decade-long Campaign for Fair Food has raised the piece-rate pay of many Florida tomato pickers by 42 percent – enough to provide a fair living wage, at least for now.

The Campaign and its local supporters will be protesting outside the Ponce de Leon Publix on the eve of Oct. 3 to ask the supermarket chain to join other companies and pay just one cent more per pound of tomatoes they buy.

Secondly, I am in complete agreement that the greater problem of unsustainability is systemic, and that greater structural changes are needed that challenge the foundations on which the system is built.

However, the mere thought of that task is huge and daunting enough to paralyze many people into complete inaction. Henry’s derision of “small acts” of using “low-energy bulbs,” “low-flow toilets,” “recycled bath water” and “safer plastic” misses the bigger picture.

It is true that some of these changes fit very well with the capitalist “maddening pursuit of profit,” because they save people and businesses money – using low-energy light bulbs costs you less. And many corporations and individuals implement such initiatives in an attempt simply to greenwash their image rather than institute any real change.

However, something else is happening too – awareness of environmental and social issues is spreading and causing people to act. Being conscious of climate change and its causal factors or the suffering of farm workers who bring food to our table is part of the solution, not the problem.

The seemingly small acts of choosing to ride a bike instead of driving a car, using less water and air-conditioning and consciously buying products made of safer and more socially and environmentally sustainable materials are also big acts of personal rebellion.

I recommend reading Chris Land’s homage to the subversive power of the bicycle in Upsetting the Offset: The Political Economy of Carbon Markets.

Do I believe that the capitalist and consumerist system we live in is broken? Absolutely. But I also believe that big structural change doesn’t happen overnight nor does it happen in a vacuum.

In their autobiographies, iconic figures like Martin Luther King Jr. and Mohandas Gandhi – who, in the popular imagination, have become inseparable from the social movements they fronted – do not claim to be exceptional or take credit for the monumental changes their work helped accomplish. Instead, they are humble. They talk about feelings of merely being in the right place at the right time, and that even if they didn’t step up, they felt that someone else, eventually, would have.

In other words, the stage was set, the time was ripe and the people were hungry for change. I am glad that year after year thousands of students, faculty and staff who pass through the gates of Emory, or any other institution or community trying to make positive steps forward, are “bombarded by one word in particular: sustainability.” I am glad that their hearts and minds might have been touched, that they may walk away with an increased sense of “something is amiss in the world that I live in.”

Perhaps enough of them will set the stage and make the time ripe by being hungry for change, and maybe, just maybe, some of them will help lead us into a structurally different world.

Ioulia Fenton is a first-year doctorate student in the Department of Anthropology.