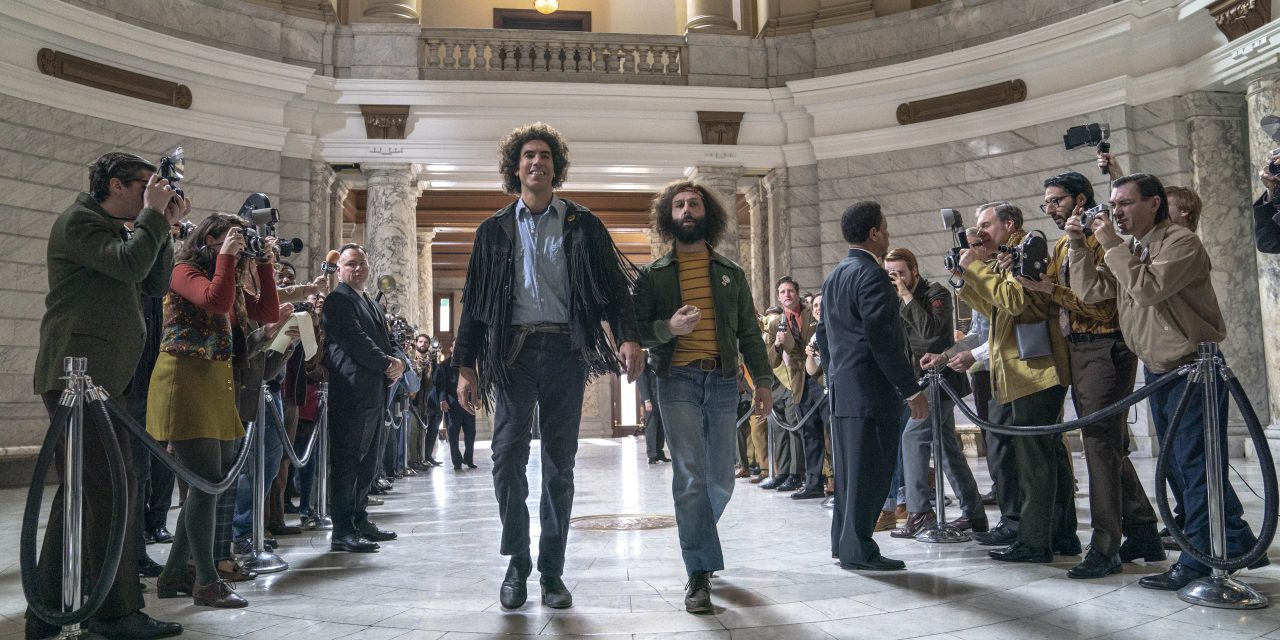 In a year brimming with social unrest, anger against the establishment, threats to our basic framework of democracy and corruption within our justice system, it feels prescient for “The Trial of the Chicago 7” to be released now after living in development hell since 2006. Today, the infamous 1969 trial is pure evidence that what we’re fighting against in 2020 are inherent in the fabric of our history and the never-ending Sisyphean task that is causing true change. In “The Trial of the Chicago 7,” writer-director Aaron Sorkin creates a stirring portrait of the monumental trial, presenting a timely lesson on the importance of fighting against the abuse of power while allowing his trademark style to maintain a compellingly entertaining and engaging tone.

“The Trial of the Chicago 7” depicts the courtroom drama that followed the violent riot sparked by the police during demonstrations by activists at the 1968 Democratic National Convention. The eight individuals accused of inciting the riot present a spectrum of liberal activism in 1968, with the most significant defendants being the leader of the Students for a Democratic Society Tom Hayden (Eddie Redmayne), leaders of the “Yippies” movement Abbie Hoffman (Sacha Baron Cohen) and Jerry Rubin (Jeremy Strong) and co-founder of the Black Panther Party Bobby Seale (Yayha Abdul-Mateen II). Throughout the proceedings, the defendants clash over their differing political ideologies and dispute on how to deal with their blatantly unfair trial and systemic corruption emerging at every turn. 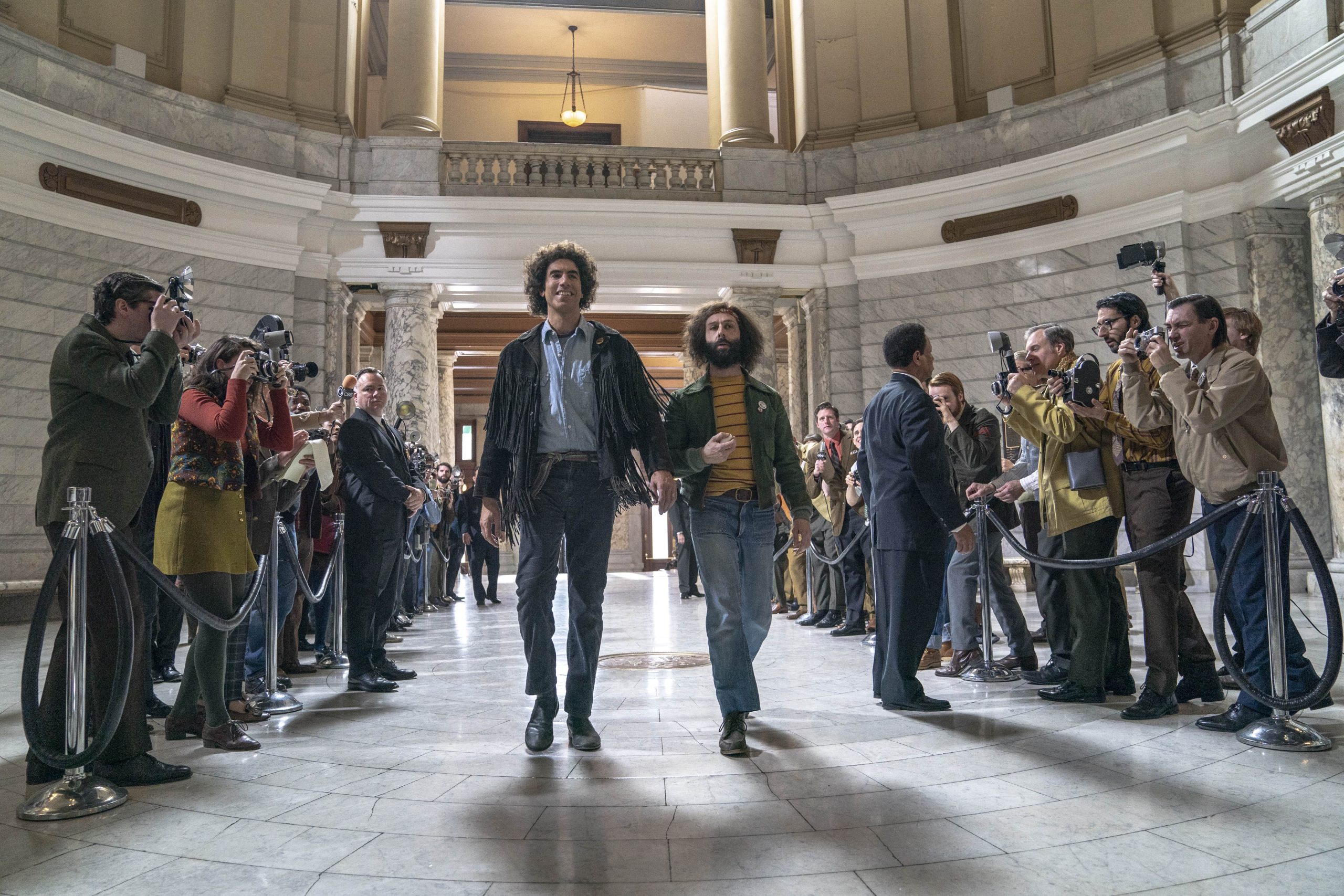 Abbie Hoffman (Sacha Baron Cohen) and Jerry Rubin (Jeremy Strong) gleefully walk toward the courtroom while being bombarded by questions from the press. / Courtesy of Niko Tavernise/Netflix

The film focuses on heavy topics and themes such as the violations of fundamental American rights and corruption within our justice system. Despite this, Sorkin’s direction and writing strike a fine balance between portraying the grim realities of judiciary and political injustices while maintaining a high level of quick-witted entertainment that could only have been constructed by the writer of 2010’s “The Social Network.” There’s not a single dull moment in the film’s runtime, as Sorkin injects every scene with his trademark ping-pong repartee. This keeps the film from stalling into a fit of repetition from the many courtroom scenes that all follow the same basic structure. Most of the movie is set within claustrophobic rooms, which would typically be fairly dull. However, Sorkin’s dialogue and characters produce a lively energy that keeps the film from potentially falling into conventional historical biopic storytelling.

When delving into its hefty thematic subjects, “The Trial of the Chicago 7” pulls no punches as it engulfs the audience in the horrors and abuse the defendants faced both in the streets and in the courtroom. The riot scenes, in particular, capture an immersively grotesque feeling. The audience is barraged with a flurry of images showing the consequences of police brutality. Throughout each scene, authentic black-and-white and color footage from the actual event are seamlessly stitched in with the movie’s portrayal of the riots, creating a scarily realistic depiction of the terror and confusion a protester experienced at the 1968 event.

If there’s one place that “The Trial of the Chicago 7” falters, it’s in Sorkin’s occasional overreliance on inspirational music, which plays in a few too many scenes for it to not feel a little manipulative. The reliance on this transparently stirring orchestration takes away the power of certain moments, as it doesn’t allow the action to speak for itself, especially in a film in which the importance of language and rhetoric is at the forefront. The film also feels as if it’s glossing over significant portions of the trial. Only being two hours long, the film obviously cannot cover every moment of the months-long trial. However, in the final few minutes of the movie, when Sorkin jumps from a crucial witness testimony to the outcome of the case having already been determined, it’s hard not to feel like important details were skipped over.

“The Trial of the Chicago 7” is a thrilling and stirring depiction of the everlasting fight for the soul of America and the importance of political theater in advocating for that progress. Aaron Sorkin and his cast create a timely and entertaining depiction of the infamous trial that underscores the significance of our constitutional right to organize and fight against those who abuse their power. As the phrase the protesters in 1968 made their rallying cry exclaims: “The whole world is watching.”