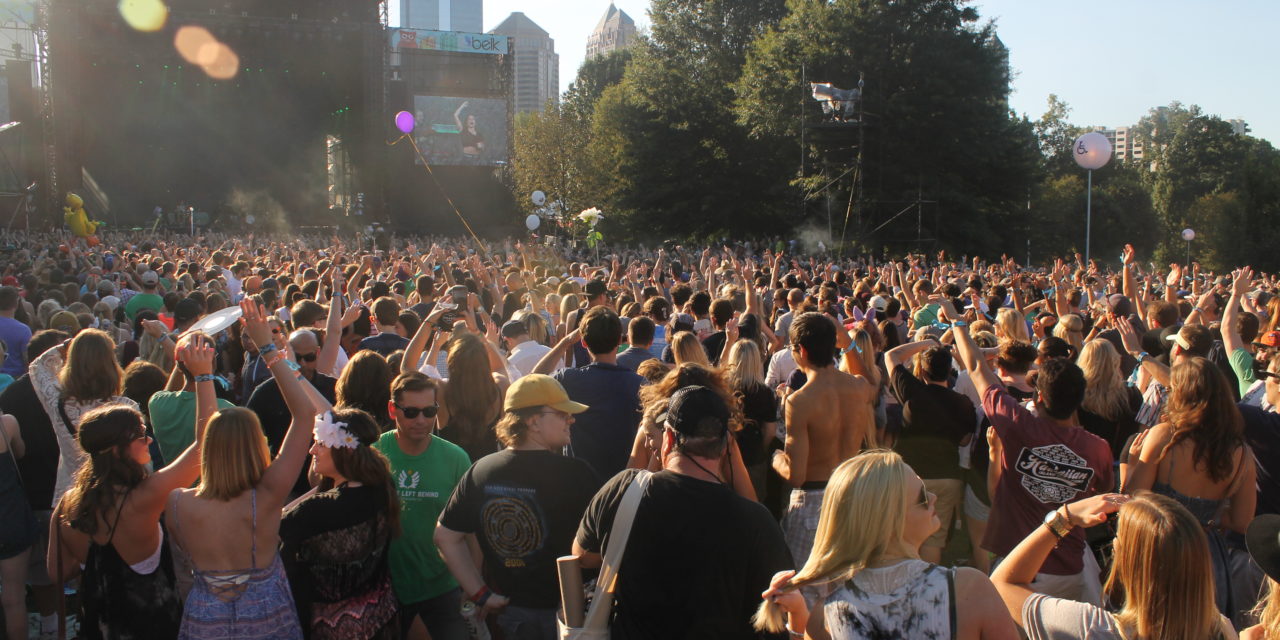 With a line forming near the entrance to Piedmont Park at 9 p.m. the night before Sept. 18 — where hordes of people camped out so that they could be the first ones going in — there was a sense of excitement about the atmosphere this year at Music Midtown. Last weekend, tens of thousands of people flocked to one of Atlanta’s biggest festivals. The organizers successfully built upon the positive reviews and popularity of last year’s event and upped the ante with 30 artists, up from 24 in 2014. This year’s artists spanned a wide range of genres and included some big names like Drake, Sam Smith, Hozier, Icona Pop, Van Halen, Tove Lo, Sir Elton John and Vinyl Theatre.

The Ferris wheel and Atlanta skyline added an element of urbane festivity to the occasion and provided for a beautiful backdrop.

Irish rock band Kodaline was the opening act on Friday, with popular hits like “Ready,” “Love Like This” and “High Hopes.” The band, originally known as 21 Demands, was energetic on stage and expressed their love for Atlanta as they performed singles from their first studio album, In a Perfect World.

Swedish pop sensation and singer-songwriter Tove Lo brought an edgy energy to the stage, and really riled up the younger crowd. The audience went crazy for her hit singles “Talking Body,” “Not On Drugs,” “The Way That I Am,” “Got Love” and Billboard chart topping “Habits (Stay High).” People went particularly wild when she did a little strip tease and then flashed the entire crowd, the effect exaggerated by the huge screens on the sides of the stage.

The next performer and definitely the biggest name of Friday besides Drake, was Hozier. Andrew Hozier-Byrne is also an Irish musician, who skyrocketed to fame with “Take Me to Church.” Even before he took the stage in a casual outfit consisting of a denim shirt over a t-shirt and pants, a girl had to be carried out of the crowd because she fainted from the mere excitement of his presence. His huge fan base did not disappoint; it was the only performance out of both days where there wasn’t a single foot of space to move around. He quickly got the crowd going by opening with “Like Real People Do” from his debut EP Hozier.” He followed with “From Eden.” He then performed “Rhythm and Blues” and “To Be Alone.” An audience favorite was “Someone New,” which brought a mellow atmosphere to the park and. Hozier definitely captured the hearts of people with that song. He then joked around while he covered Ariana Grande’s “Problem,” before finishing strongly with “Take Me to Church.”

The next huge name on the line-up for Friday was Sir Elton John, who, in his five-decade career, has sold more than 300 million records, making him one of the best-selling music artists in the world. There was definitely an older crowd listening to him, but it was huge, because one never knows when one will have the chance to listen to such a legend again. He wore a bedazzled suit — very much his style. He performed several of his hits like “Benny and the Jets,” “Candle in the Wind” and “All the Young Girls Love Alice.” It was gratifying to see such an internationally recognized face on stage.

Arguably the biggest artist of the night, Drake, wowed the masses of people who had patiently waited for him for over half a day. The screams alone should have probably reverberated in at least a two-mile radius. His performance was all smoke, lights, fire and shadows and punctuated with drama, a great DJ and amazing sound effects. He expressed his love for Atlanta, which made the crowd go wild, as he explained how he got his first record deal at a studio in the city. He was all about reciprocating the love that the city had showered on him. He came onto stage wearing a sweatshirt with the word ‘October’ on it and singing the lyrics to his hit “Trophies.” During the rest of the performance, he rapped “Headlines,” “Crew Love,” “Worst Behavior,” “Night Shift,” “Tuesday” and “The Motto.” Every single song of his gathered huge responses from the crowd. Enough has been said about his musical genius, and the Canadian rapper didn’t fail to meet the crowd’s sky-high expectations. He often joked about his own melodramatic, ‘romantic’ tendencies before singing really explicit lyrics. This made the crowd laugh and established an amazing rapport. It was truly a performance for the ages, and one that those present will not forget for a long time.

Saturday’s line-up was just as amazing, although there were definitely a bigger number of Indie artists and lesser-known bands. While it was impossible to cover every artist on the second day, the number of choices available more than made up for this fact. The artists include but are not limited to New Politics, Andrew McMahon in the Wilderness, Run The Jewels, Panic! At the Disco Alessia Cara and Vance Joy.

The best overall performance on both days, in my personal opinion, was given by Swedish electropop duo Icona Pop whose music, choreography and crowd-pleasing abilities surprised everyone. They had incredible dancers on stage, and brought amazing energy to the performances themselves by dancing along to their songs. One can only imagine how much energy was required to both sing and dance, but the surprising thing was that for expending so much effort they sounded really good live. Their songs were really peppy. They began with “All Night,” and then went on to perform “We Got The World.” Both their voices and outfits were in total sync and harmony. The duo also performed “Girlfriend.” They are known for promoting feminism and constantly dedicated the songs to the girls of the city. They also performed a cover of Bruno Mars’ “Locked Out of Heaven.” They then sang to a lesser-known song called “Emergency,” a new single, before finishing with their biggest hit “I Love It,” which they recorded in partnership with Charlie XCX.

Hard rock, heavy metal and glam metal are just some of the genres performed by another big headliner of Saturday: Van Halen. They began their set by pulling off an incredible guitar solo, before belting out the lyrics to “Runnin’ with the Devil.” Then, they played a few more impressive instrumentals before performing one of their fan favorites “Romeo Delight.” The band has sold more than 80 million records online and in 2007, Van Halen was inducted into the Rock and Roll Hall of Fame. VH1 has ranked them seventh on their list of the top 100 hard rock artists of all time.

The final set on Saturday stole the hearts of the people of Atlanta and also of those who had traveled far and wide especially to see the artist performing it: Sam Smith. He is one of those artists who have an amazing team of backup vocal artists and an even more amazing live band. He sounds incredible when he’s harmonizing on stage. Having said that, it is not surprising that the crowd went ballistic when he started with his hit “I’m Not the Only One.” He kept them entertained by giving insights into his personal love life, and also invited his backup singers to perform duets with him. His cover of “Ain’t No Mountain High Enough” shook the venue. He also sang “Leave Your Lover,” “Nirvana” and “Like I Can” in quick succession. Sam Smith has one of the most amazing classical voices, and even while performing live his vocals are incredible. He then performed “Latch” and his chart topper “Stay With Me;” some girls in the audience literally swooned. He explained how, along his journey, the music that he created had eventually become the people’s music — and that perfectly summed up the message propagated by festivals like Music Midtown: it’s all about making music your very own unique experience.