The School That Was Too Certain for Curiosity 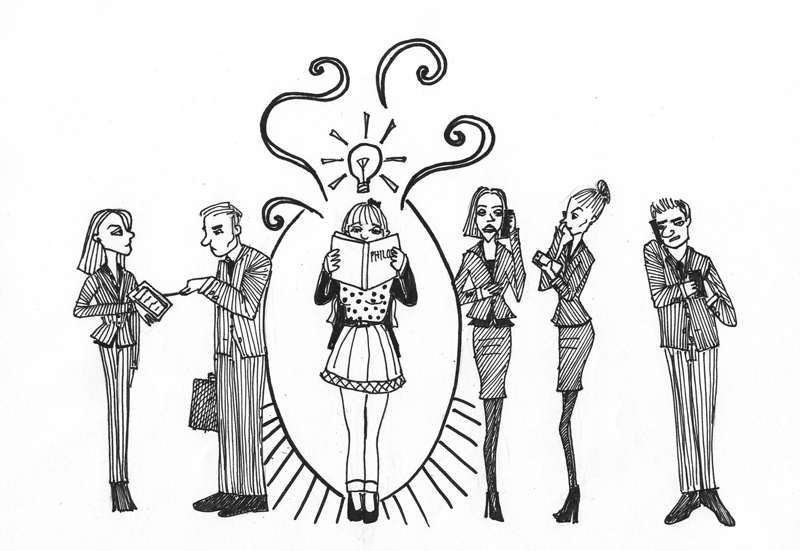 “Do you know what the most common question philosophy majors ask after college is?”

I cringe and log another mental tally mark. Mr. Adler – a member of my local community – is trying to warn me. He wants to protect me and point me in the right direction.

To him, I’m a lost dog who’s veered off the path and is unable to find his way home.

This isn’t the first time I’ve tasted this flavor of advice. I’m used to the suggestion that my study choices – history and philosophy – render me unemployable. That I’ll be impotent and lost in the post-collegiate job market seems to be a natural consequence of the deadly fusion of multiple interests and an uncertainty in course.

The comments seem to drip with more and more condescension as I careen further and faster down the track to my worthless diploma.

I don’t argue with Mr. Adler, though. Instead, I smile and with an uneasy chuckle, tell him not to worry about me – that I have it figured out.

But I want to say more. I want to tell him that I don’t have it figured out. Not all the details, anyway.

I want to tell Mr. Adler about my school, where the lawns are manicured, the shirts are starched and the fraternity houses employ cleaning crews to mop up after Friday night’s festivities. I want to tell him about the corridors of prestige and privilege, where ambitious 20-somethings walk at a brisk pace toward a ticket of admission to the highest echelons of American society.

I want to explain to him why I’m spending my evenings in conversation with Thoreau and Beckett instead of trying to fit into a pre-professional study course that feels like a hand-me-down sweater two sizes too small. I want to tell him that a year and a half ago I turned on my laptop and opened my email to find a window with a simple message waiting for me: an elite university wanted to give me a carte blanche – a breathing room I’d never have again.

I wanted to tell Mr. Adler that his comment wasn’t an anomaly. It’s only a symptom of a broader and more disturbing phenomenon: the tunnel vision of the modern American college student and the society that not only tolerates it, but also incites it.

Imagine this: you step into a car dealership that carries every car on the market – used Corollas, the latest Jaguars and Teslas, even the Ferrari convertible from “Ferris Bueller’s Day Off.” And then, in that “get-yourself-something-nice” kind of way, the salesman turns and hands you the keys to all of them. That’s what it means to be at Emory.

But that’s not how we see our time here, is it?

No, at Emory we attach ourselves to the “pre-.”

We sift through that box of keys and pluck out one or two. We test the cars that will bring us the furthest distances in the fewest minutes. Those are the cars we like – the ones we can use, the ones that will get us to where we’re going.

But where are we going?

Our way of life starts early. In high school, we followed the formula that promised to get us here – we hated studying for the critical reading section of the SAT but did it anyway. So it was, and so it continues to be.

But we only have a finite period to devote to test-driving. To explore, to read and think and to reflect and compare. To be wrong more often than we’re right. And to reject. And we let the keys slip from our hands and fall into that compromised pre-professional abyss.

Maybe you’re driven by passions for healing the sick and giving sight to the blind and view the pre-med track as the most effective tool in reaching those goals; maybe you see the university GER system as limiting; maybe pure, intentional motivations are pushing you toward the “pre-.” Surely we need nurses and doctors, researchers and statisticians, investors and stockbrokers. Indeed, society soars on the coattails of such ambition.

But the seas won’t rise and the skies won’t open if Goizueta Business School students take chemistry and pre-med students take accounting. Professional success doesn’t have to come at the cost of broader curiosity. Context and perspective – an understanding of the greater whole – injects meaning into our ambitions and pursuits.

When we opened that email and read that invitation to Emory, we were being asked to extinguish the lamps that have always guided our paths and set new ones alight down an uncharted road. To break down assumptions, then build up new ones and break down those new ones again.

We were being invited to read Kant one hour and Hawking the next; to be part of a discourse that spans centuries with Leibniz and Lincoln, Oppenheimer and O’Keefe, Du Bois and the Dao.

We were being freed, for just a few moments, from the constraints of the “pre-.”

To stare down the barrel of financial instability is nothing short of terrifying. But to the extent that Emory students know how to read and reiterate, they must also be able to think, communicate, convey and contextualize. No man lies on his deathbed wishing he’d spent more time worrying about how to read a spreadsheet. These years are called “undergraduate” because they serve to establish the basics, the fundamentals, the fertile soil from which more will grow.

How are we to understand our place in the cosmos if we have no grasp of the greater whole? Art calls this idea perspective: from an inch away, a painting is only a jumbled smear of color. Judeo-Christian religion calls it Sabbath, a day apart from the rest and a frame of reference to sweeten and round out our approach to the other six.

Mr. Adler isn’t unique, nor will his advice soon become the voice of the minority. But he’s wrong. In the modern liberal arts college, ambitious doesn’t have to mean certain. Driven doesn’t have to come with a direction. Dreams of Wall Street and private practice do not have to outshout the whispers of the curious.

And philosophy doesn’t have to come with fries.

Ami Fields-Meyer is a College sophomore from Los Angeles, Calif.

Adeyemo Equipped to Be Next CC President