The New, Old and Timeless of Music Midtown 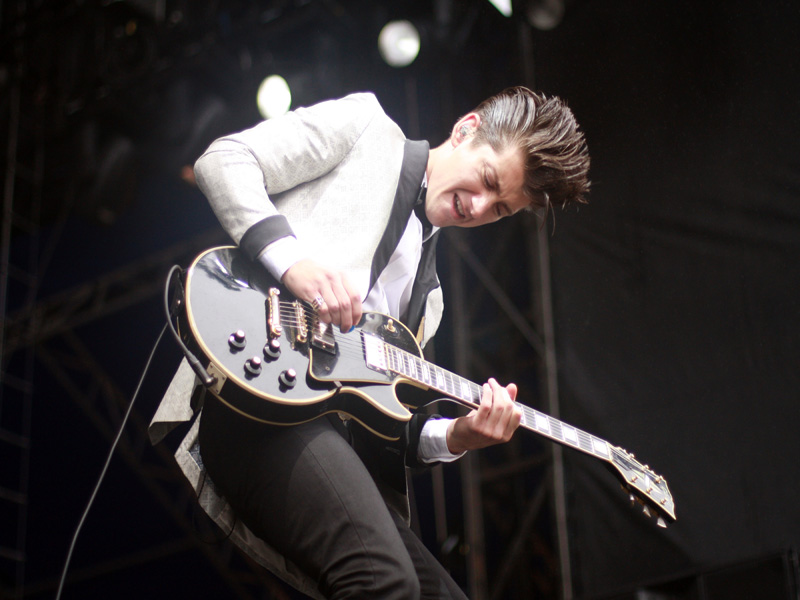 These skinny French guys ran onto the Electric Ballroom Stage on Friday afternoon to a classical intro, immediately launching into a gorgeous rendition of new single “Entertainment” with the right ratio of rock to synth. Moppy-haired vocalist Thomas Mars has the kind of voice that carries and stays with you on the MARTA ride home, and he quickly got the sweaty crowd dancing, first to an ’80s inspired “If I Ever Feel Better” and then with the anthemic “Lasso.” Phoenix has perfectly constructed choruses and melodies that are conducive to singing along, and everyone, from the oldest yuppy to the youngest teenager, chanted the lyrics to “Lisztomania” and “1901.” It was impossible to not feel good to be there.

If you didn’t already worship Arctic Monkeys, you probably did after their set on Saturday evening. These guys changed the sprawling, grassy expanse of Music Midtown into a tightly packed British club. Alex Turner, the charismatic vocalist and face of the band, introduced their tracks without shorting on the expletives (and sips of Corona) and stopped pretty often to comb back his gelled hair. Arctic Monkeys performed a good portion of their new album AM, which hardly disappointed. “Arabella” and “Why’d You Only Call Me When You’re High?” sent the audience into waves of crowd-surfing, some of whom ended up closer to the stage and others that ended in the mud. Turner asked the audience at the end of the set the questioning title of the track, “R U Mine?” and everyone screamed – they were clearly his. Turner and crew have come a long way, and they know it.

By the time the Red Hot Chili Peppers hit Music Midtown, all the other concerts had ended, resulting in a pilgrimage from every corner of the park. Everyone waiting for the Chili Peppers had survived the rain and cold and layers of mud, and it was time to finish out the weekend right. The Chili Peppers’ opening jam seemed to ask, “we’re back; did you miss us?” before the foursome slid into generational favorite “Can’t Stop” (the crowd went wild). The guys delivered a pumped-up version of “Dani California” and then slowed it down with the decade-old, truly poetic “Otherside.” But the show’s finest moment was the cover of Stevie Wonder’s “Higher Ground,” which brought bodies together and heads banging. The two-hour set ended the weekend on a musical high and sent everyone home humming, with a full dose of bass in their chests.

Saturday night opened with a pink sunset and a theatrical performance from Karen O. of the Yeah Yeah Yeahs, who wore stage-like makeup and a sequined suit appropriate for Broadway. Everyone could tell she was enjoying herself as she cackled and danced and delivered “Heads Will Roll,” “Gold Lion” and “Zero” with her legendary female-punk vocals. Crowd members swung neon batons through the air and hoisted one another up on shoulders. The mud had become a swamp. The sky was photo-worthy. The group’s performance of “Maps,” which began with a prolonged version of its famous steady riff, was the best of the set and gave the concert its winning dimension.

Kendrick Lamar is unique in the sense that he’s good through headphones but even better live. He drew more than the usual crowd at the Roxy Stage and used the microphone to his advantage as he rapped with heart and energy. His performances of “B—h, Don’t Kill My Vibe” and “F–kin’ Problem” had people dancing in the dark like it was a club. He interacted with the audience between tracks and got everyone riled up with juvenile yet enjoyable screaming contests. Lamar’s performance of “Money Trees” demanded the respect of everyone there and put him in a higher league than his fellow collaborators such as A$AP Rocky and 2 Chainz.

Tegan and Sara are so personable that it’s hard not to want to be around them. They took over the Roxy Stage and chatted with the audience like we were all in their own living room. “When we play, the rain stops,” Sara said, which was true – it was finally dry for their set. The female duo started in with easy-to-keep-up-with and poppy “Drove Me Wild” and continued with fan favorite “Back in Your Head.” The crowd that came to see them was among the most diverse of the weekend, attracting both younger and older attendees. Tegan and Sara’s strongest moments were an upbeat version of “Living Room,” “Now I’m All Messed Up” and “Closer,” which ended the set.

Capital Cities didn’t sound all that different live than they do in the studio, but that was entirely okay. Their style of electro-pop works in any setting, and they kept the audience moving with tracks like “Kangaroo Court” and “Love Away.” The group introduced a dance, which they named the “Capital Cities Shuffle,” and had the crowd moving to the left and the right, spinning around and clapping in the rain. Ultimately they performed an EDM, amped-up reprise of uber-popular “Safe and Sound” and had the crowd swinging their soggy T-shirts in rings around their heads.

Rapper 2 Chainz opened his Friday performance by yelling “2 Chainz” into the mic to notify everyone that he had arrived. The performance came off as a promotion of his new album B.O.A.T.S II: Me Time, which was featured on paper album covers doubling as fans. 2 Chainz started off with a quick teaser of Wale’s “Rotation,” Drake’s “All Me” and “Beez in the Trap” – he didn’t perform much original work. “Put your twos up,” he said to get the audience going, but it didn’t help all that much. Highlights included “Crack” and “Birthday Song,” both off his album Based on a T.R.U. Story. The concert was uninspired, but fortunately, “t.r.u.” to his word, he was in fact wearing two chains.

John McCrea of Cake likes to talk, but he did too much of it on Friday night, which resulted in less time for music and more time for people to leave for a good spot at the Journey venue. Cake has personality, and they showed everyone a good time with tracks like “Love You Madly” and “Rock ‘n’ Roll Lifestyle,” but left too much downtime in-between. It seems like the band has come up with a Cake equation: trumpet + wiseguy lyrics + beat = song. This worked for “Short Skirt/Long Jacket,” but became monotonous during songs like “Sheep Go to Heaven.” People still enjoyed themselves and agreed with McCrea’s encouragement that the moment was great without “posting it,” but Cake didn’t add as much to Music Midtown as the audience might have hoped.