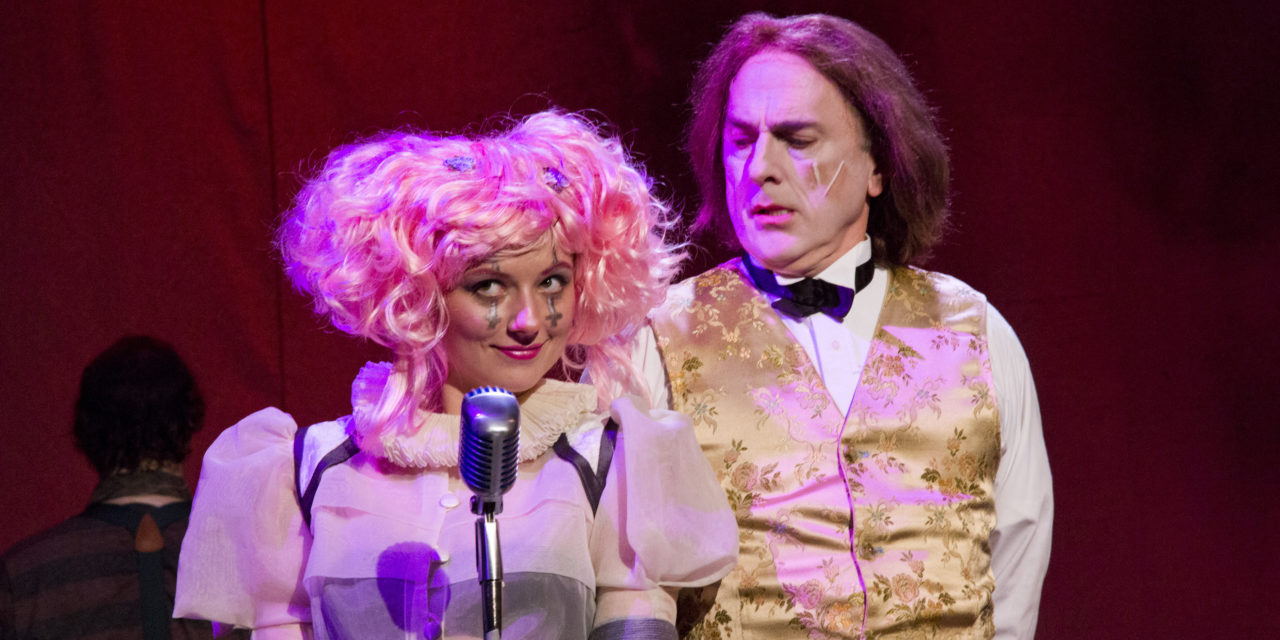 If you’ve ever wanted to watch a show featuring horrific murders, fast-paced comedy, real-time sound effects and a few hip-hop dances thrown in the mix, then I have a suggestion for you.

Theater Emory’s newest production, The Meantime: A Time-Traveling Radio Spectacle opened Thursday, Nov. 5, and it’s a bit of an adventure. The show, according to writer and director Brent Glenn, is meant to be “an homage to radio and the art of listening.”

When you walk into the Mary Gray Munroe Theater, you’re offered some treats from the coffee bar. I helped myself to a cup of (free!) hot chocolate and then surveyed the room for a seat. The room was completely transformed for the show; there are only so many “normal” theater seats, and instead, most of the floor space was filled with couches, armchairs and tables.

I sat at one of the smaller tables and someone with a beard and black suit approached me almost immediately. She made some conversation, attempting to use 2015 lingo and failing, which makes sense because according to her, she’s from a different time. Another character recited a poem for us. A third asked us if we’d like to text into the show.

The Meantime is a somewhat audience-interactive show, and theatre-goers can send in text messages that are then written on a board onstage. At one point, you’re even asked to break typical theater protocol and turn your phone on and keep the sound up so that you can receive texts back from the show. It adds some ambience to the show, but not everyone who initially texted in received the texts during the show (the person I went with, for example), and a few suffered from bad reception, leading to some late text tones coming from the audience.

The production is headed by four time-travelling radio-lovers and their band of “Chronic Argonauts:” six thick-bearded, black-garbed characters with massively differing personalities. These 10 act out a series of radio skits, each taking on a different persona for every sketch.

Because The Meantime is a tribute to radio, some of the material is actually “stolen from the best,” according to Glenn. There are some older radio skits included in the show that audience members might recognize, such as Who’s on First?, Bud Abbott and Lou Costello’s signature segment about a baseball team with players who have some confusing names.

The show is primarily composed of these kinds of sketches, and the type of skits vary dramatically. Some old radio favorites are also included, such as the horror-filled Murder Castle by Arch Oboler and The Thing on the Fourble Board by Wyllis Cooper, as well as the more dramatic and silly Flash Gordon by Alex Raymond.

My favorite skit was Murder Castle, which told the story of a man who sends out summons to young women to serve as his personal secretaries or caretakers. The twist? Well, you can get that from the title — he’s actually calling them up to his castle to kill them. The sketch takes a close look at the story of one particular girl who’s called up for secretarial work and the sister who comes looking for her a month later. This sketch is put on by three of the four main characters, and each one truly embraces their roles. You even get to hear a couple of people die — very realistically, I might add.

One of the more interesting features for me was the pair of Foley artists in one corner of the stage who produced the sound effects for the show. In the show, the two green-skinned creatures come from the distant future where people have no need for sight and rely only on sound. As such, they’re perfect for creating sound effects, and they have an entire arsenal of objects that they use to create sounds like footsteps, water dripping from cave walls and tinkling bells.

Sometimes I found myself watching them instead of the other characters just so I could see the different objects that they used to make certain sounds. They realize the atmosphere of the show, making the skits come to life as the other actors give their lines.

The Meantime even functions as a musical of sorts, with characters singing several songs in the show. Calliope “Pill” Dickles, portrayed by Christina Leidel, is a one-person band, and I lost track of the number of instruments she played: keyboard, saxophone, banjo and the list goes on.

Not to mention that there are more than a couple of points where the Chronic Argonauts start to dance, and the Foley Artists may or may not start rapping in the middle of everything.

“It really does feel like fun adventure,” College senior Julian Freeman said. “The play featured plenty of classical radio-show elements which were spotted with classical references. The comedy was a Grade-A example of combining slapstick humor with some present-day humor added, and it had something for people of any age to be able to laugh at.”

Because time is so thematic, The Meantime has a few quirks about what constitutes the beginning of the show, the end, and various parts of the middle, and the whole thing is out of order. Since the show is made up almost entirely of skits, they don’t necessarily have to be in order, but as a result, there are moments where the show is hard to follow and a bit cluttered — there were parts of the show that lulled, and a few references seemed to go over the audience’s head. The moments of prolonged silence from the company seemed to indicate that they were waiting for laughter that didn’t come.

Regardless, the set was beautifully constructed, and the interactive elements made for a fun show. It was certainly interesting. And if that’s what you’re looking for in a theater experience, I’d recommend The Meantime.

The show runs from Nov. 6 until Nov. 15 in the Mary Gray Munroe Theater in the DUC.