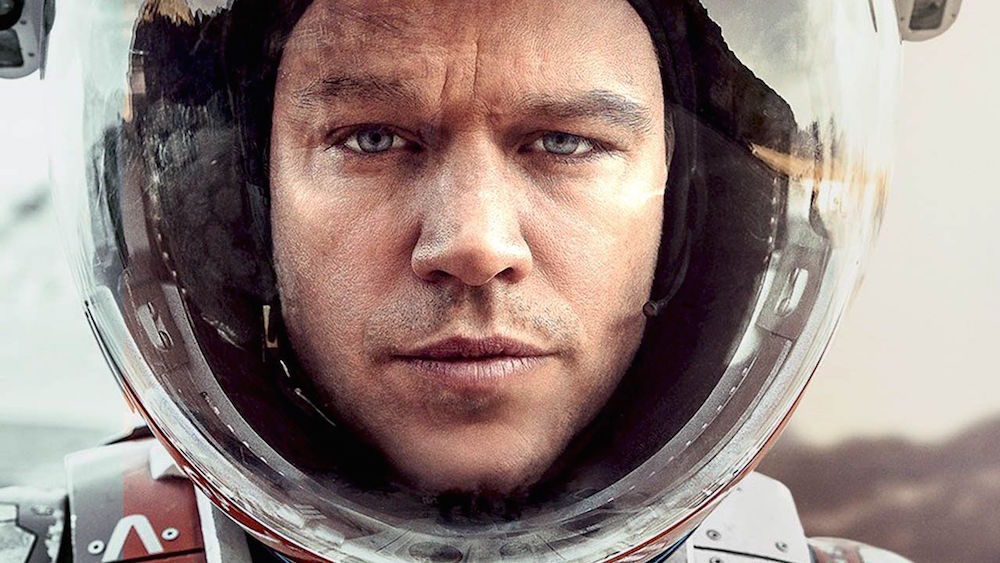 “I’m gonna have to science the shit out of this.”

A great trailer line and a mission statement that wraps up everything wonderful about this endearingly corny, often hilarious, sometimes emotional, incredibly optimistic and affirming of the basic good in humanity film that is The Martian.

For anyone who’s ever wondered what it’d be like if you watched Gravity at home and understood what the point was or watched Interstellar and hoped against hope that the film was written by a human (and not by a robot with the Wikipedia article on “New Age Belief” plugged into it), then The Martian is the film for you. Even if you’ve never wondered those things, this film is for you.

I firmly believe in the power of storytelling. The stories that we as a culture impart through various media have the capacity to do so much. They move us, they frighten us, they make us think about who we are and, most importantly, they inspire us. Look at Star Trek.

NASA astronauts, legendary physicists and the movers and shakers in the field of science all cite Star Trek as an inspiration and even an influence that moved them into their career. Look at the tricorder, a scientific device from the original series, and then take a look at your cell phone. The first space shuttle, built in 1976, was named the “Enterprise,” reportedly after a letter writing campaign by “Star Trek” fans.

The power of media, and especially of sci-fi, is not to escape, but to inspire. To dream that one day, we will reach the heights of what we see in those mediums. The Martian is a film that will start those dreams for so many people.

The Martian, based on the brilliant novel of the same name by Andy Weir, is the story of Mark Watney (Matt Damon), an American astronaut left behind on Mars after a terrible dust storm causes his crew and NASA to believe him dead. Armed with nothing more than determination, his wits and the left-over NASA supplies, Watney has to survive Mars and contact NASA if he is ever to have a hope of getting home again.

Meanwhile, as the crew barrels home, NASA must deal with the fallout of his supposed death. But when Watney finally manages to contact them, it seems as though the entire world bands together to make sure that Mark Watney can eventually see Earth again.

The elephant in the room going into this film was the direction of Ridley Scott. To say that Ridley Scott is a director of considerable skill and one who has a great legacy in modern science fiction (as director of Alien and Blade Runner) is definitely true. An equally true statement is that Ridley Scott has an inconsistent ability behind the camera and has made a number of films recently that question whether or not he was actively trying to make a good film (as director of The Counselor, Prometheus and Exodus: Gods and Kings).

Scott’s problem as a director is that he seems removed from the actual ‘ins and outs’ of the material. He doesn’t know what he feels, so we don’t know what we feel or what we are supposed to feel. We’re constantly removed, at arm’s length from Ridley Scott as an artist, and are therefore removed from his films. This could not be further from what he has accomplished with The Martian.

Now, much of this is thanks to the work that screenwriter Drew Goddard has put on the page. From a purely technical standpoint, this film is tightly written. Every scene propels forward with purpose. Every character is given a moment to give themselves a clear role and a personality, but the focus is put exactly where it needs to be.

Almost entirely as a bonus, it’s a wickedly funny script. The right characters get laugh lines at the right moments, always to alleviate (but never break) the tension and make them feel like real people. Goddard gets that even in the darkest moments; real people make jokes. But never too many, and never at the wrong time. It’s one of the tightest, most well-balanced scripts that have come out in sometime, and Drew Goddard deserves every ounce of credit he receives for how wonderful this film is.

Another great deal of credit is due to the cast of this film. Even in the later days of his career, Ridley Scott is still capable of pulling strong and interesting performances out of his cast. But even separate from his abilities, this is a cast that is more than up to the tasks given them by the script.

Matt Damon is the most important piece of the cast, as isolated-on-Mars-for-much-of-the-movie main character Mark Watney, and, not only does he meet the challenge, but he absolutely destroys it. I’m not hyperbolizing by saying that this is likely a career-defining performance, and will be looked at as one of his best come the end of his career. Damon turns in a full-fledged movie star performance, reminding us of his immense charisma and how easy it is to hook into him and care about him. His Watney is almost preternaturally optimistic, but never unrealistically so. He responds to tragedy in real palpable ways, but never losing sight of his mission to survive and to escape from the planet. Watney is a hero, a guy who’s deservedly going to stand in the annals of sci-fi fame alongside Captain James T. Kirk and Ellen Ripley.

While Damon spends a lot of time alone and doesn’t spend maybe more than three minutes on screen with the cast around him, they’re possibly creating one of the best ensemble casts in recent memory.

If Damon is the MVP, Chiwetel Ejiofor definitely is the runner-up. In a very real way, his Venkat Kapoor is the earthbound mirror of Watney. Equally as dedicated to problem solving and to the pursuit of exploration, he’s a witty and wildly emotive character who provides a phenomenal ground in what could have been far dryer scenes.

Honestly, this review could have been a full-on discussion of every great actor and the work they did in this film. But, no one but me would want to read that. Let it be summed up that this is a phenomenal cast, all turning in career highlights.

So far, I’ve heaped praise on the script and cast and on Ridley Scott. But I’ve not really gotten into what Ridley Scott does for this film. The obvious is that he provides it (in tandem with Cinematographer Dariusz Wolski) with a great deal of visual flair. This is a phenomenal looking film. While not the focus as in Gravity, The Martian creates a series of gorgeous Martian vistas that leave you feeling the same awe and loneliness as Watney.

And, in fact, that might be the ultimate power that the film and Ridley Scott hold. Let’s talk real quick about the role of a director, and what they do since that’s often not really clear. The director takes all the disparate elements of a film, like, say a phenomenal script, a top-notch cast and a gorgeous visual sense. Then they take those various elements and filter them through a singular vision, pulling them into one emotional experience. They are not always the author of the book, they are more often the editor, the one who compiles. The director, if they do their job, should create a singular experience for us to rally behind as a film.

And that’s what Ridley Scott does in The Martian. At every moment in the film, we are fully immersed. This is a film that has the power to pull us in and move us. It’s a nakedly emotional film, and extremely effective at that. I’m big enough to admit that, at multiple moments during this film, I started crying. But not because this is a sad movie.

But what kind of film is The Martian ultimately?

It’s the kind of film that an astronaut is going to say finally gave them the push to pursue their dreams to go to space.

It’s the kind of film that will be cited in many an interview of a Nobel Prize winner.

It’s the kind of film that some lucky little boy or girl is going to see, and it’s going to inspire in them a lifelong passion to change the world.

That’s the kind of film The Martian is.