The Jo Bros Know How to Put on a Show 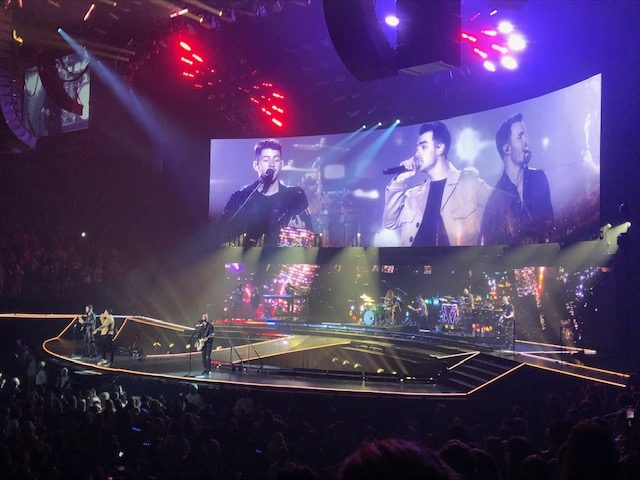 The atmosphere was absolutely electric at the Infinite Energy Center in Duluth on Nov. 19, but that was no surprise. After all, Nick, Joe and Kevin Jonas were in town.

Ten years ago, a Jonas Brothers concert would likely have consisted of thousands of screaming 10-year-old girls. However, those fans have aged, along with the brothers themselves, and their “Happiness Begins” tour was primarily populated by folks in their 20s reliving their glory days (including myself). Luckily for those fans, the Jonas Brothers, who are headlining their 10th tour, are no rookies to the concert scene. They skillfully weaved songs from their latest album, “Happiness Begins,” with their earlier 2000s classics to create a fulfilling concert experience for new and old fans alike.

The Jonas Brothers started the show with a rousing rendition of “Rollercoaster” while fans, who had been waiting in the stadium for two hours, welcomed them with deafening cheers. After the long wait, the crowd was roaring, and with a setlist that included “S.O.S,” “Cool” and “That’s Just the Way We Roll,” the excitement did not abate. The brothers exuded confidence as they strutted around the stage and posed for adoring fans who were holding themselves back from leaping onto the stage.

The Jonas Brothers didn’t prioritize their vocals throughout the concert; after all, the boisterous fans and loud music made it hard to hear their voices anyway. They spent most of the time approaching the edge of the stage to get up close and personal with the fans. But the band did prioritize audience engagement, particularly for the hardcore fans. At one point, halfway through the show, the Jonas Brothers asked the audience for song suggestions, saying, “We want to play the songs that you want to hear.” They played a snippet of their new Christmas song, “Like It’s Christmas,” their 2007 tune “Just Friends” and “Gotta Find You,” from the “Camp Rock” soundtrack. While a majority of the audience wasn’t able to sing along to these more niche songs, the crowd lit up right afterward as Nick brought out his hit single “Jealous” followed by Joe singing his band DNCE’s massive jam, “Cake by the Ocean.”

The show hit a bit of a lull after that, with the brothers bringing out some of their slower tunes, “When You Look Me in the Eyes” and “I Believe.” It was clear that the crowd was getting a bit impatient; after all, the main reason many fans came out to Duluth in droves was to hear the upbeat classics. However, after a bit of waiting, the Jonas Brothers delivered on those as well.

Beginning with a massive sing-a-long rendition of their 2008 single “Lovebug,” the brothers came out swinging with their biggest hits. Even the most casual fans jammed along to “Year 3000,” which was followed up by the brothers anticlimactically exiting the stage. Unsurprisingly, a few minutes later they returned with a fire-fueled performance of “Burnin’ Up” and ended with their Billboard chart-topping “Sucker.”

The show’s most off-putting element was the visuals interspersed between performances. The concert included a series of clips of the Jonas clan meeting their younger selves, but the videos didn’t make much sense and were overly serious, especially considering the band’s fun persona.

But those video clips couldn’t damper the show’s absolute excitement and buzz. It was only amplified by the show’s opener, Bebe Rexha, who primed the crowd with provocative dance moves and lively renditions of old hits “The Monster,” “Take Me Home” and 2017’s “Meant to Be.” Between Rexha and the Jonas Brothers, the night at the Infinite Energy Arena took me from my childhood to the year 3000 and all the way back.