The Goat Herding Club: The Prank That Got Real 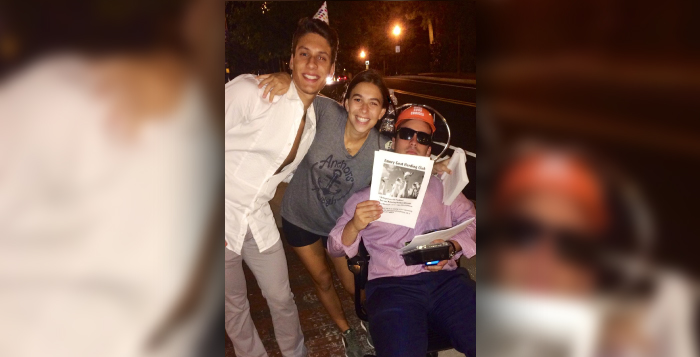 On Tuesday, Sept. 9, College freshmen Jake Grant and Andreas Katehis decided to bring together their talents and pull a prank on their friend.

While Katehis was counting the hours to the end of his birthday, Grant sat in dismay as he contemplated the struggles of a freshman with tons of homework.

Their peak of boredom that night led them to prank their friend by printing flyers of a Goat Herding Club with their friend’s contact details on them. But their way of adorning the campus with these flyers was not a conventional one.

“We were dressed up in suits and [Katehis] rolled me out on a desk chair around campus,” Grant said. “I also wore a borrowed helmet from my friend that said ‘Make good choices.'”

The prank went even further as the two printed about 60 flyers, “because after 60, my printer ran out of ink,” Katehis said.

That night, the current co-presidents found many students who joined in to laugh at their prank. The next morning, Katehis proceeded to print another 100 flyers to bring the joke to a larger scale. The two walked around campus and covered ground from Few and Evans to White Hall.

They soon started receiving calls and emails from various Emory students. Some contributed to the prank, and some were genuinely interested.

“We found people who thought: if this is a prank, it’s hilarious; but if this is real, then I want to do it.” Grant said. “So yes, we started off as a joke, but now we’re trying to make it real.”

Currently, Katehis and Grant are in conversations with real goat herders and hope to invite one to speak and educate the members of the club. Moreover, the two also found farms closer to campus, and next, they aim to progress with a few club field trips. But before bringing all these plans to reality, they realize that they need to get permission from the Emory student government to be an official club on campus.

Katehis and Grant strongly believe that a significant amount of education can be acquired from outside the classroom and they’re interested in being able to provide a learning experience to students in a novel way.

Grant said he empathized with all other Emory students who were stressing about their workload, since he was also sapped the day the club was conceived.

He trusts that the group will be an outlet for others to “chill out” while also learning something new. Katehis also believes that the group would be “great” to have a good time and also a wonderful opportunity to meet new people, both of which the two have had the chance to partake in since the prank began. More so, the club has no application process so anyone is welcome to join.

Katehis and Grant were so overwhelmed by the community response that they felt compelled to make a Facebook page. After a week, 5,061 individuals have viewed the page and about 724 individuals have interacted with it.

When these two freshmen informed their families of what had occurred three weeks into their college life, they said their parents were slightly concerned, but for the most part, laughed along with them. Grant’s family owns a horse farm, and it also has a small number of goats. When Grant proposed this venture to his father, the latter just said “no.” However, as the conversation continued, Grant’s father contributed a few ideas to take the endeavor further.

Grant and Katehis are two lively boys who are trying to transform a joke into an endeavor. The club hopes to have biweekly meetings but, for now, the Goat Herding Club is holding their first information session this Sunday at 4 p.m. in White Hall.