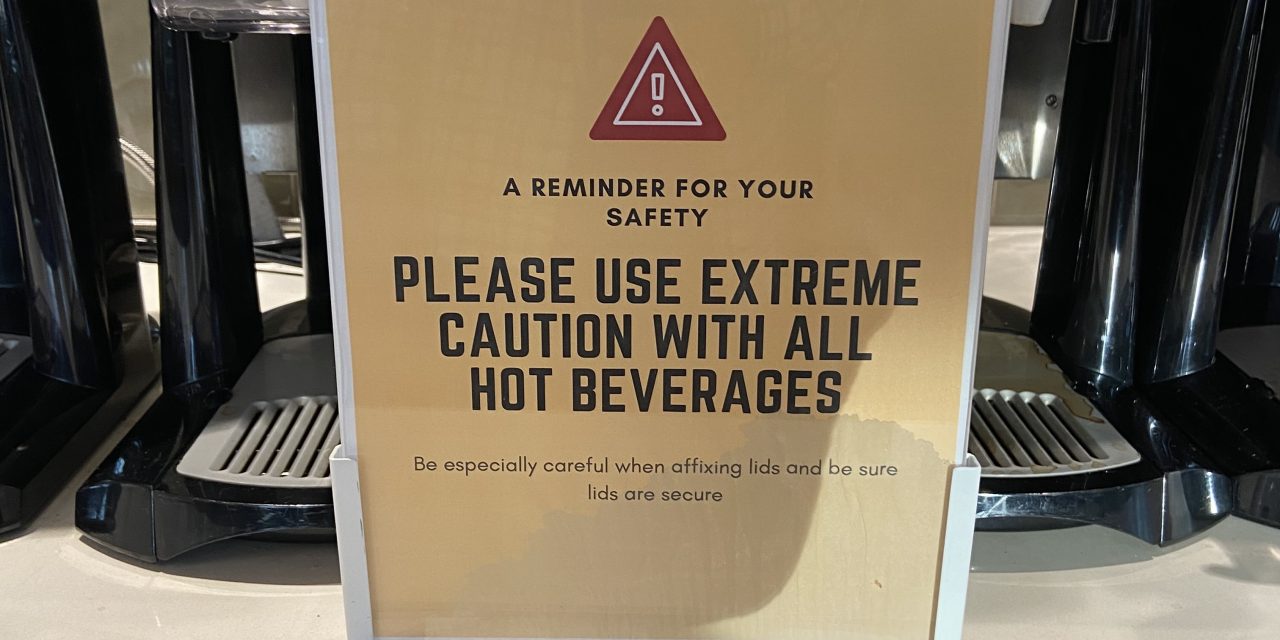 After the pandemic delayed my first collegiate soccer season, I was ecstatic to play this past fall. I prepared for the season by playing in summer league games, lifting at the gym and working on my fitness more than I ever had before.

I finally felt like I was back in my soccer routine with daily practices, team activities and in-person classes. Everything was going great, and our team was performing well. Then, my entire season changed with one cup of Earl Grey.

I was at the Dobbs Common Table (DCT) preparing a cup of hot tea in early September. I did not see any cup sleeves, so I held the cup by the lid since it was too hot to hold at the base. Suddenly, my tea fell from under the lid and directly onto my foot, soaking my shoe and sock. I didn’t feel anything initially, with my adrenaline rushing and in total shock. Then, the pain set in, and I screamed out in agony. My instinct drove me to rip off my shoe and sock, and I watched in disbelief as my skin ripped off along with my sock.

I was extremely uncomfortable, digging my fingernails into the palm of my hands and clenching my face to distract me from the unbearable pain. I couldn’t even walk because the skin on my ankle and top of my foot had peeled off like melted candle wax.

I was lucky to be near the Woodruff Physical Education Center (WoodPEC), so I hobbled as fast as I could to my amazing trainer for help. There, an Emory doctor was able to quickly prescribe me burn cream for the injury. I was sent to the Grady Hospital burn unit, where I learned I’d suffered second and third-degree burns on my foot.

I had to adjust to my injury in many ways. I had two appointments with doctors at Emory Student Health Services. I got crutches and wraps for my foot. I had to shower with my foot dangling outside so it wouldn’t get wet. My roommate gently applied burn cream on my foot and wrapped it up every day. When it rained, I had to tie a bag over my foot to keep it dry. I was in excruciating pain, both physically and emotionally.

When the reality of the situation settled in, one question stood out in mind: when was I going to be able to play? This freak accident shocked me, my teammates and my coaches. I thought I would be out for the rest of the season.

My mental health quickly deteriorated. As a student-athlete, my sport is a huge part of my life that provides both consistency and excitement. Soccer is what cleared my mind of any troubles I had in my life. I waited so long to play after my freshman season was canceled — now it had been taken from me once again.

To say I was frustrated, emotional and helpless would be an understatement. I started seeing an Emory Athletics Counseling and Psychological Services provider. This helped me to wrap my mind around what was going on and develop ways to cope, but it was still difficult to be on the sidelines. I decided to do everything I could to support my team by cheering and being engaged. This setback would not derail my enthusiasm for soccer or the rest of my life.

Luckily, I bounced back from the injury in record time after two weeks, though it felt like the longest and most painful two weeks of my life. I took excellent care of my wounds, saw the doctors I needed to see, mastered walking on crutches to get to classes on time and was fixated on healing as fast as possible so that I could get back on the field. My teammates, friends, family, doctors, trainers and coaches all fueled my resilience. I realized that having and using a good support system is a key to resilience.

In attempting to understand more about my injury, I saw parallels with the now famous McDonald’s hot coffee case. In 1992, 79-year-old Stella Lieback spilled a McDonald’s coffee on her lap and suffered third-degree burns that required skin grafts. She sued McDonald’s for the cost of her medical bills, but McDonald’s refused. After going to court, she was awarded $3 million, more than she originally asked for. The suit revealed that McDonald’s had received more than 700 prior reports of injury from its coffee, including third-degree burns.

These are cases that you usually read about and could never imagine happening to you, until it does.

I reached out to Emory’s administration about this incident because I did not want other students to experience my injury. The water in the dining hall should never be hot enough to cause second and third-degree burns.

Upon reaching out, the DCT staff did answer my questions and apologized for what happened. According to the DCT, water is kept at 190 degrees Fahrenheit, which is the standard temperature for the dining hall. My parents and I requested that the appropriate person on-campus reevaluate the temperatures of hot beverages and mandate safer temperatures. We requested that the hot beverage temperatures on-campus be lowered to a range between 130 and 160 degrees Fahrenheit, deemed the safest and most preferred by consumers in a study published by the Institute of Food Science in 2019. The study notes the important safety distinction between “brewing” and “serving” temperatures, with the DCT’s water falling just under the brewing threshold of 200 degrees Fahrenheit.

We also emailed Emory College Dean Michael Elliott who said that one of the directors of Campus Life would be in touch after reviewing the incident. He wrote that he was confident our concerns were being taken seriously and that the director of Dining was consulting the appropriate industry, health and safety standards along with internal risk and safety offices.

Dave Furhman, senior director of Campus Life, then emailed us saying Dining Services found that the brewing temperatures at Emory for coffee and hot water for tea met industry recommended standards. He did not acknowledge the request to lower temperatures.

I am upset with the University’s unwillingness to change their policy regarding water temperature standards. Instead, the DCT placed “caution signs” near the hot water dispensers, which felt insulting. These signs do not solve the issue. I was burned from water that was served just 22 degrees below boiling temperature, not because I did not know it was hot.

While Dining Services has not broken any safety regulations, the beverage temperatures seem wholly unnecessary. I hope that Emory administrators, who claim they are committed to student health, do not hide behind industry standards and take proper measures to avoid future accidents. 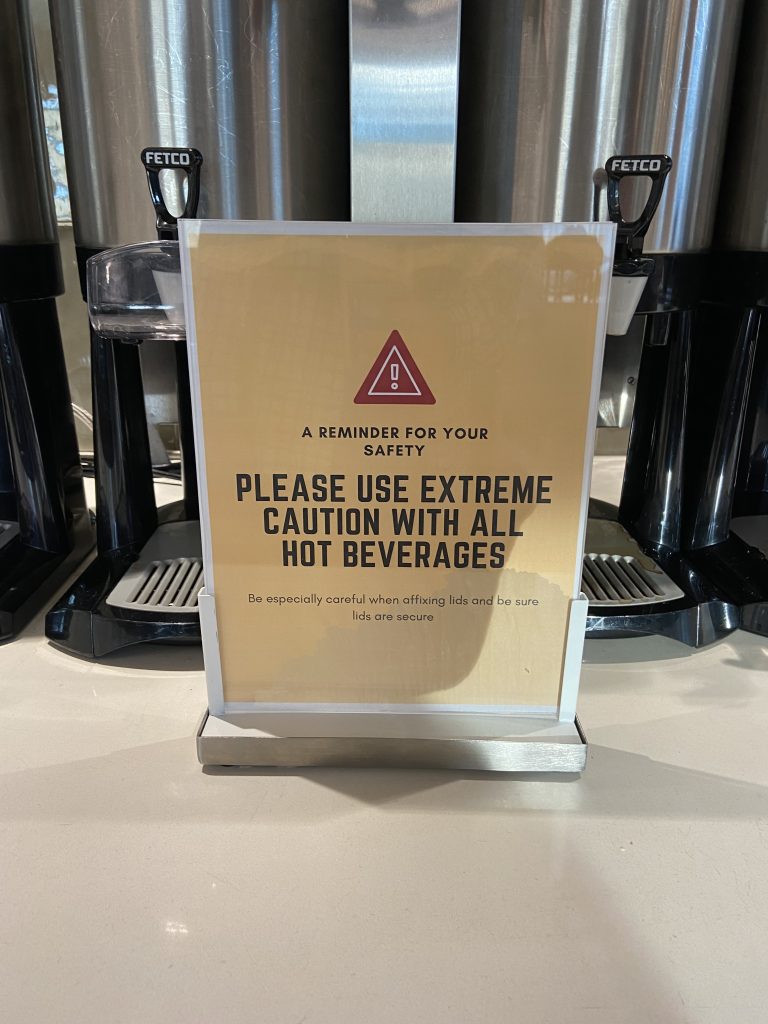