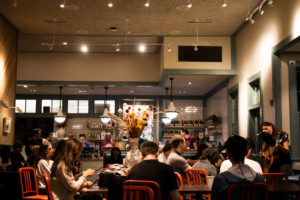 The Depot by Kaldi’s Coffee failed its most recent health inspection from the DeKalb County Board of Health on March 15, receiving 60 points out of 100. Any score below 70 fails the inspection.

The inspection report notes 17 Georgia food service violations, including improper sanitation methods, storage of expired foods and food contact with dirty surfaces. Most of the violations were corrected on-site, according to the report.

The main cook was observed “constantly pulling up pants while making food” and another employee was observed handling a deli sandwich wrap after picking up a fallen receipt from the floor, according to the report.

The report also states that employees failed to wash their hands after contamination. The inspector found dirty food preparation equipment and dishes stored as if they were clean.

Keith Kildron, vice president of retail operations at Kaldis’ headquarters, told the Wheel that the company has corrected the violations in the report and noted that the location had scored well in previous years.

“We’re reviewing our procedures and implementing enhancements to prevent this from happening again,” Kildron wrote in a March 15 email to the Wheel. “We see this as an anomaly and are fully committed to continuing to maintaining our high standards in the future.”

Cox Hall Food Court received a “C” grade in October 2018 with an overall score of 76. Inspectors cited violations such as raw animal food stored near ready-to-eat meals and improper temperature of chicken and rice.

Kaldi’s Coffee operates two other locations on campus, in Cox Hall and the School of Medicine. The Emory Student Center (ESC) will also house a Kaldi’s Coffee when completed.