The Denial of Due Process 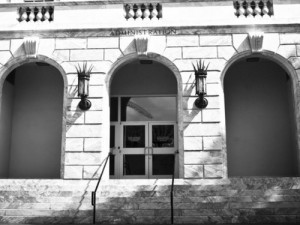 Last Wednesday, Sept. 25, 2013, the Emory College faculty held its first regularly scheduled meeting of the year. The central item on the agenda was the decision by the College Grievance Committee to deny the collective grievance filed in April 2013. The grievance argued that the cuts to academic programs and curricula announced last year involved multiple violations of College and University bylaws, and of the Statement of Principles Governing Faculty Relations, known as the Gray Book.

I was among the 18 signatories to the grievance. During the meeting, I introduced a motion to overturn the Grievance Committee’s decision and allow the full faculty to consider the merits of the grievance after the faculty receives the final reports of two ad hoc committees looking into the past and future of shared governance in the College. After brisk argument, a majority of those assembled rejected the motion, so the matter of the grievance is now dead.

I ardently lament this turn of events. I see the vote to kill the grievance as a turning point for the College faculty, and a serious alteration in the balance of power between faculty and administration. At stake is nothing less than the integrity of the College and University bylaws, the common rules that allow us to work together fairly and effectively.

The grievance cited bylaws violations of two principal types. First, the grievance argued that the processes by which the cuts occurred contravened the faculty’s primary responsibility for curriculum. Second, it argued that the process violated the primary responsibility of the Governance Committee (GovCom) to represent the faculty in core governance matters, as delineated in the College bylaws.

The University bylaws clearly grant the faculty responsibility for curriculum, stating that “responsibility for the instructional programs of the university shall be vested in the university faculty.” And the College bylaws state that “the Governance Committee (GovCom) represents the Emory College faculty.” The bylaws are equally clear in limiting the dean’s role in the governance process, assigning him or her the delimited tasks of administrative leadership, advice and supervision.

That is how things are supposed to work–with clearly defined roles. The grievance argued that this is not how they worked in practice when it came to the cuts announced last year. Far from exercising control over these curricular decisions, most of the faculty were unaware that the proposed cuts were even under consideration. Chairs and directors of the cut programs universally report that there was no forewarning, no consultation and no indication whatsoever that their programs were to be eliminated. Further, the record makes clear that even GovCom itself, the faculty’s representative, had no real understanding of the administration’s intentions until after the fact. It was not until September 6th of last year, just days before the cuts were announced publicly, that GovCom was informed of the decisions made by the College Office.

The dean stated at that time, and in his September 14th letter to the faculty, that the decisions were not driven by financial necessity. “These are fundamentally academic decisions,” he wrote. As such, under the bylaws, they rightly fell within the jurisdiction of the faculty. The dean’s job was to advise and to supervise the faculty in exercising that jurisdiction, and to consult regularly with GovCom on its position. The College bylaws are crystal clear on the importance of transparent communication: “The administration shall consult with the Governance Committee on all matters pertaining to the College and to the faculty of the College. This consultation shall include but not be limited to proposals for the development and modification of College programs and the setting of priorities and goals for the College.” (Article V, Section 1A)

The minutes of GovCom’s meetings make clear that the dean did not consult GovCom. Rather the administration made curricular decisions and informed GovCom about them afterward. The grievance argued that this lack of required consultation violated the bylaws. Moreover, the bylaws establish two standing committees charged with ensuring the integrity of the curriculum–the Curriculum Committee and the Educational Policy Committee. The College Office failed to consult with either of these committees in carrying out the cuts, resulting in further violation of the bylaws.

Rather than consult GovCom and the appropriate standing committees, the administration turned instead to the College Financial Advisory Committee, CFAC, a subcommittee of GovCom. The truth is that CFAC was a subcommittee in name only. It operated behind closed doors and was, in practice, not accountable either to GovCom or to the faculty at large.

CFAC was established to give financial advice. Neither GovCom nor the faculty explicitly authorized CFAC to lay plans for curricular and program cuts, and very few members of the faculty–essentially only the members of CFAC itself–knew it to be engaging in that work. How do we know this to be true? From GovCom itself. The simple fact, as established in GovCom’s minutes from the spring of 2009 to the spring of 2012, is that even though CFAC’s mandate required that it report to GovCom, GovCom did not receive full, accurate and substantive reports from its own ostensive subcommittee. Periods of seven and nine months went by without GovCom receiving reports from CFAC at all. And when reports on CFAC did occur, the information was scant and cursory. GovCom members on more than one occasion raised concerns about CFAC’s opacity. In April 2011, for example, the minutes record one GovCom member expressing concern that GovCom was “seen to be responsible for a committee while being kept in the dark about its work.” After the cuts were announced, the university community learned in a penetrating story in the Wheel that the chair of CFAC admitted, with no small hint of pride, that he dissimulated information on CFAC’s work, including overtly lying.

The grievance argued that the dean’s reliance on CFAC in selecting programs for elimination was not a legitimate substitute for the consultation required under the bylaws. The fundamental lack of transparency by which CFAC operated violated the faculty’s right under the bylaws to oversee curricular matters. The simple fact is that because GovCom was kept in the dark, the entire faculty was kept in the dark. Because GovCom was excluded from the decision making process, the entire faculty was excluded. Because GovCom was deliberately impeded in exercising its responsibility for curriculum, the bylaws were violated.

Even now, a year after the fact, information about how CFAC operated is still being withheld from the faculty. Last fall, the dean informed the faculty that GovCom had decided to keep CFAC’s deliberations confidential. Yet there is no record in GovCom’s minutes of the committee shielding CFAC’s activities from disclosure. At the same time, the chair of GovCom announced that there were no CFAC minutes that would be released. The refusal to release CFAC’s minutes continues the failure to consult with the faculty required by the bylaws.

Beyond these violations of the bylaws, the grievance also argued that the administration failed to adhere to the Gray Book. The Gray Book states that the Board of Trustees has the right to discontinue an academic program “under extraordinary circumstances” and “utmost necessity.” However, the administration never cited extraordinary circumstances or utmost necessity as grounds for its decision to close academic programs. In fact, the opposite is the case: as noted previously, the dean stated that the decisions were matters of choice, not necessity. They were not, he stated, driven by the financial crisis, but by “strategic considerations,” and were “fundamentally academic decisions.” As such, they cannot be justified under the Gray Book.

For all of these reasons, it is clear that the process that resulted in the cuts violated University policies and the bylaws. This is the case we submitted to the grievance committee, in a long, detailed and fully documented report.

The Grievance Committee’s responsibility under the bylaws is to “investigate and hear grievances…[relating to] improper administration or application of policies.” It did not hear and investigate. To hear and investigate would have meant requesting additional information or clarification from the grievants, interviewing members of GovCom (particularly those concerned about CFAC’s lack of transparency), interviewing members of CFAC and relevant administrators in the College Office, and consulting faculty governance experts. Most importantly, it would have meant addressing each of the violations cited in the grievance. But the Grievance Committee did none of that. In fact, it pointedly refused to do so.

A mere ten days elapsed between the time the grievance was filed and the Grievance Committee’s denial. We know that for several of those days, the grievance sat unclaimed in the mailbox of the committee chair. According to its own report, the Grievance Committee held a single meeting at which it met with the chair of GovCom, and it consulted minutes of a GovCom meeting from October 2012, after the cuts had been made. That’s all. It called no other witnesses. It asked for no further documentation. It consulted no other participants or experts. The resulting report denied the grievance without addressing the specific bylaws violations we cited. It simply ignored them. It was very clear to me that the Grievance Committee did not fulfill its duty under the bylaws, failing the grievants, the entire faculty, and the very concept of accountability itself.

For her part, in the faculty meeting of September 25, 2013, the chair of the Grievance Committee invoked strict confidentiality, and implored the faculty simply to trust that the committee did its work, that its judgment was fair and impartial, and that its members–based on their high academic rank in the university hierarchy–acted in the best interests of the faculty. I rejected and still reject that call for blind faith.

Stepping back and looking independently at what has happened at Emory, I can imagine how the discussion of curricular restructuring might have happened. I can imagine regular consultation not only with GovCom and the Standing Committees, but with the chairs and directors, the Humanities, Science, Social Science and Arts Councils, departmental planning sessions, and not least, direct address to the full faculty. Such a process would have surely been intensive and difficult, but would have been fair, following both the letter and spirit of the bylaws, and the principles of shared governance.

With the vote to uphold the botched report of the Grievance Committee, it appears that a great many members of the faculty share no such vision. They apparently believe that secrecy, non-transparency, and pettifogging denial of due process for aggrieved members of the faculty are in the best interests of the institution. Their victory in the faculty meeting of September 25 opens the door for the administration to pursue whatever predatory agenda it wants with impunity.

I see things differently. Whatever differences have become evident through the tumult of the last year, effective and robust shared governance is essential to us all. Likewise, a non-functional grievance mechanism is a serious matter for everyone, especially when the issue pertains to fundamental bylaws violations.

Jason Francisco is an associate professor in the Visual Arts Department.