The Dangerous Nature of HB 29 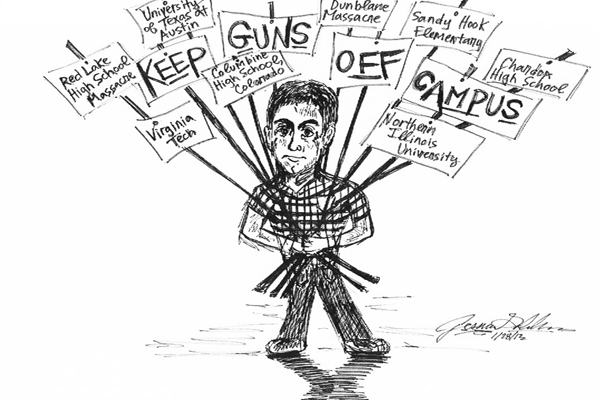 In the coming months, the Georgia House of Representatives will introduce a bill, HB 29, or the “Georgia Campus Carry Act of 2013.” The resolution would amend the Georgia State Constitution, which forbids concealed weapons in “a building that is occupied by a government entity,” to allow individuals at public and private colleges and universities to carry firearms.

In other words, guns at Emory.

This legislation, in the midst of the current gun control debate, demonstrates how far extremists in this country will go to “protect the right to bear arms.” That the 2012 elections yielded a new republican supermajority in the General Assembly suggests that this bill has a strong chance of passing.

On his website, the representative who drafted the legislation, Charles Gregory (R-Kennesaw), wrote that “there is no more appropriate, and no more necessary, time to defend our liberties than when they are under attack!”

He went on to write, “If the principal [in Newtown, CT] had access to a gun that day, many lives could have been saved; or who knows, if Sandy Hook wasn’t a ‘gun-free zone,’ maybe Adam wouldn’t have even targeted the school.”

Let me get this straight. Mr. Gregory believes Adam Lanza went and massacred school children school because their school was a gun-free zone. So it was the school’s fault, or the parent’s fault or maybe Connecticut’s fault. But certainly, the senseless killings were not the fault of the mentally disabled man with an automatic weapon.

However, we, in the state of Georgia, will never be blamed for the death of innocent children because we will have guns in our schools.

Instead of proposing legislation to prevent massacres from happening, such as testing for mental illness before selling firearms, treating the mentally ill or, God forbid, an assault weapons ban, Mr. Gregory has introduced a resolution to start an arms race fueled by fear.

If Mr. Gregory’s legislation were merely meant to prevent another mass shooting on a college campus by an irrational actor, it would be misguided and wrong. Guns do not prevent insane people from massacring children; treatment for the mentally ill and restrictions on gun access do.

However, this resolution was introduced to combat all types of crime on campuses, not just mass murder. Thus, this legislation is beyond wrong – it’s dangerous.

Especially at schools like Georgia Tech and Georgia State, where on-campus crime is more prevalent than it is at Emory, all students are susceptible to some degree of crime. So, under Mr. Gregory’s logic, if a college student feels that he or she is vulnerable to armed robbery or other kinds of violence, he or she should get a gun.

But isn’t that why we, in Georgia, have police to protect students and a legal system where guilty criminals are punished in accordance with their crimes? Aren’t these institutions society’s means of combating undesirable activity?

However, even if we live in Mr. Gregory’s world and don’t believe police are an effective use of the public’s money or that laws are an effective means of deterrence, Mr. Gregory seems to ignore the fact that many of these potential new gun owners will be untrained to handle firearms or may have ulterior motives for obtaining them.

Additionally, Mr. Gregory does not understand that wider gun ownership will increase violence on college campuses. Increased gun ownership will create an incentive to use guns to carry out crimes. If a robber is planning on stealing someone’s money, while he used to be able to beat up his victim, he now has to account for the victim’s potential firearm by bringing his own. Thus, if we give Mr. Gregory the benefit of the doubt and say that crime rates would go down with mass gun ownership, the percentage of those crimes that would be violent would increase.

In today’s society, if citizens do not believe existing law enforcement agents adequately protect them, they should advocate for steeper deterrence (harsher penalties) and/or an increase in the police force. That might mean more guns, but at least we know, hypothetically, that the finger on the trigger will protect us.

HB 29 is dangerous because it, along with other extremist pro-gun legislation, proposes an alternate vision for American life. Mr. Gregory, by advocating a world where individuals protect their own rights with their own guns, must live in a Wild West fantasy, where citizens can only trust themselves to protect their lives and property.

However, humans have established governments and laws because life in Gregory’s armed dystopia would be nasty, brutish and short.

Thus, it is imperative that Emory students, either through the new “Emory Students Against Guns on Campus,” initiative or via their own means, fight this resolution by lobbying state government or raising awareness. The passage of Gregory’s gun legislation, rather than alleviating violence, would institute a society of constant fear, where no one will be safe.

Ben Leiner is a College junior from Baltimore, Md.

Real Change Is In The Air

Has America Forgotten the War? An Alum on His Military Experiences 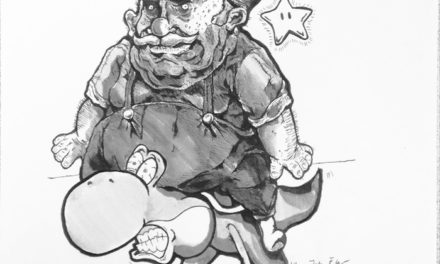