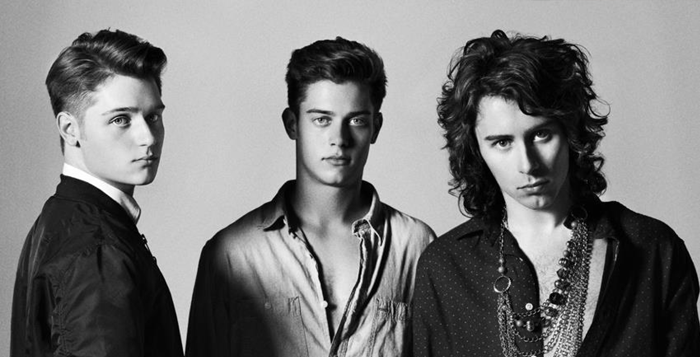 The Ceremonies — brothers Matthew, Mark and Michael Cook — are more than just a band. The Los Angeles natives are only in their 20s, but possess an intelligence, tenacious work ethic and creative maturity well beyond their years.

Although photos of The Ceremonies may be primarily in black and white, the brothers exhibit an entire color spectrum of skill and talent beyond music, with Matthew and Michael pursuing art and Mark pursuing creative writing and business, as well as art. This continuous spectrum of talent enables The Ceremonies to awaken their audiences’ senses and emotions, creating an experience that is auditory, visual and emotionally engaging.

There is an incredible amount of thought and meaning behind The Ceremonies’ creations: lyricist Matthew cites romantic poets William Blake, William Wordsworth and British futurist writer Aldous Huxley as key inspirations to his songwriting, if that’s any indication.

While The Ceremonies are best known for the song “Land of Gathering,” from their self-titled debut album, The Ceremonies, their song “Nightlight” is just as captivating.

It’s a song about mind-over-matter and caving into temptations, encompassing a perfectly controlled combination of vocals, strings and percussion. In addition to “Land of Gathering” and “Nightlight,” The Ceremonies’ debut album includes “Ballroom Bones,” “Wolfdance” and “Straw Hat,” all equally as imaginative and exactly what music should be — a complete sensory experience.

The Ceremonies recently concluded their tour with Scottish indie-rock band Glasvegas and performances at the South by Southwest Music Conference and Festival held in Austin. Matthew, Mark and Michael took the time to answer a few questions for me via email, discussing everything from the meaning behind the band name to what we can expect from The Ceremonies in the future.

Benazir Wehelie: What is the meaning behind your name, The Ceremonies?

The Ceremonies: We are interested in this notion of bringing people together in a sort of experiential communion to participate in feeling songs, meanings and visual aids that land anywhere on the entire spectrum of human emotion. A ceremony can range from the sadness of a funeral to the happiness of a wedding. It’s really an all-encompassing occasion where we may emphasize union in the name of creativity and genuine thought. In this way our concerts are more than just music shows, they’re ceremonies.

BW: You’re all brothers. What made you decide to be in a band and what is the best part about making music together?

TC: (To quote the Butabi brothers A.K.A. Will Ferrell and Chris Kattan) “No … looks at each other … Yes!!! Man! Works every time!” We have been singing together for as long as we can remember. Music always just sort of flowed from bedroom to bedroom. Matthew was in bands throughout middle and high school, and when band members couldn’t make it to rehearsals held at our house, Mark or Michael would fill in. We began to pursue the performing arts participating in musicals, dramas and a capella groups. Inevitably, we started performing as an acoustic trio at charity and school events. Matthew had been writing songs since his early teens, and began to write for the three of us. The best part about making music together is just embracing the creative energies we three produce by working together and by feeding off of each other’s ideas. Although we plan to write more together in the future, thus far Matthew writes the music and we all work together to execute the vision.

BW: You refer to yourselves as being more of a fine art than a band. What do you mean by this?

TC: We want to break free from the pigeonholing notion that limits us to one medium of art: music. While music is our primary medium, we also place great importance on creating mixed media art, films, paintings, drawings and poetry. Our true passion is for the concepts behind the art. At our shows we sell a short book we self-published titled “Imagination isn’t Dead” which was created to accompany our EP as a sort of experiential read-along. It’s a combination of lyrics, poems and drawings that we made using a quill pen and a 1942 Underwood typewriter.

BW: Echo & the Bunnymen, The Cure and The Smiths are some of your key influences. What do you admire about these bands? Besides other musicians and bands, what else influences and inspires your creative process and music?

TC: Musically, all three of them deviate from pop structure and aren’t afraid to make a song a journey – yet they also have written fantastic pop songs. They also all have similar undertones in their production styles that we are particularly fond of. The lyrics, however, are just as an important piece of the collective that is a song. Ian McCulloch, Robert Smith and Morrissey are all three poets in their own right whose words have impacted how we live our lives. We admire the potential to touch people with voices and words. Aside from other musical artists, we’re deeply influenced by writers and thinkers like Aldous Huxley, Ram Dass and William Blake. We are moved by making music and art that wakes the imagination and stimulates critical thought. We’re driven by mind exploration and perspectival shift and we’re eager to find others to join us in following these trails of thought.

BW: Describe the creative process behind your debut single, “Land of Gathering.” What is the song about?

TC: “Land of Gathering” is a metaphor for a metaphysical place that everyone has the potential to reach in their own minds. It’s a place where you reconnect with your childhood self to see things with a newfound perspective – one where everything is constantly in a state of creation; a place without permanence. Unfortunately, this place sometimes gets buried beneath years of hardened adulthood and routine experience, and therefore might be difficult to access. Our hope is that the song might act as a key to the door of this mentality and help its regeneration into the views one has in everyday life.

BW: The “Land of Gathering” music video is aesthetically beautiful, and it truly showcases your abilities to create a full sensory experience using both musical and visual elements. How was the experience making the music video?

TC: Well thank you so much, we very much appreciate your kind words. The process of filming the music video was truly a group effort between the three of us, in which we each wore many different responsibility hats. We all worked on production design, canvas paintings, animation coloring, Michael did additional animation and Matthew co-directed and edited the entire video. It was a long and strenuous process that really took a toll on our energies, but in the end we were proud of the work that we did. We also were really excited by the opportunity to work with legendary animator Phil Nibbelink who was an integral part in animating for some of our favorite child animations like “Fox and the Hound” and “The Black Cauldron.”

BW: If you could each pick one song that best expresses your personalities, what song would you each choose?

Mark — “The Killing Moon” by Echo & the Bunnymen

BW: The majority of photos taken of you and by you are in black and white. If you could create the film score for any black and white film, what film would you choose and what would the music entail?

TC: “Eraserhead” directed by David Lynch. The dreamlike world in the film allows for so much creative freedom and an opportunity to really channel a surrealist sense of melody and sound decoration.

BW: You’ve toured with The Fratellis and recently concluded your Winter 2014 tour with Glasvegas. What have been your most memorable moments from touring?

TC: One of the most memorable moments we had this tour with Glasvegas was playing our first international ceremony in Toronto, Canada. We had never been out of the US before, so it was exciting to cross the border, let alone be crossing to follow what we love.

BW: When can fans expect a new album and what are your plans for the rest of the year?

TC: We are working on releasing a full length album this year, or a possible second EP. We also plan on more international touring and playing our first-ever festival shows. In addition to playing shows, we will be releasing a couple more music videos. Also, look out for acoustic cover videos that we will be posting to our YouTube channel.