‘The Cakemaker’ is a Goodie Bag of Dramatic Grub 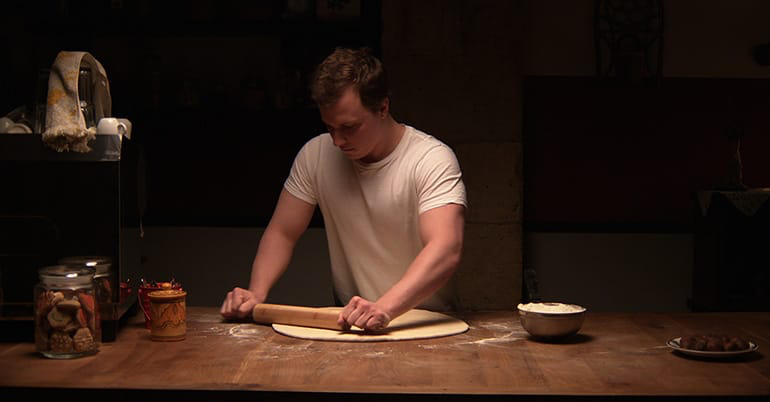 There’s nothing that brings people together quite like food. It can remind one of long lost memories or bridge cultural gaps while providing nourishment and pleasure. And there’s nothing so political, completely informed by the lives of those cooking it and those eating it. So, naturally, food is as cinematic a subject as there is, and Israeli filmmaker Ofir Raul Graizer turns his eye to it in “The Cakemaker.” In his film, food is a source of love and a respite from heartbreak — a source that transcends our differences when we share something delicious.

Pastry chef Thomas (Tim Kalkhof) makes a good living running his bakery in Berlin. He’s dedicated to his work, and it provides his life with meaning. One day, Israeli businessman Oren (Roy Miller) enters his shop. Oren, who visits Berlin for work monthly, is a regular at the bakery, and he approaches Thomas to sing the praises of his pastries. This proves to be the start of something magical for the two men, who begin a clandestine romantic relationship that continues for the next few months. However, when Oren doesn’t show up for one of his visits, Thomas learns that Oren has been killed in a car accident. Driven by his grief, Thomas takes a trip to Jerusalem, where he meets Oren’s widow Anat (Sarah Adler), a cafe owner. Thomas, posing as a student, gradually earns Anat’s trust, working in her kitchen and winning over new customers with his cakes. But Anat begins to suspect something about Oren’s trips to Berlin, even as she develops romantic feelings for Thomas.

At first glance, the plot of “The Cakemaker” sounds like something out of your average daytime soap. But the story is a beautifully realized one, and Grazier imbues the film with a gentle warmth that envelops viewers. There’s no room for judgement of his characters or their actions, just for love and empathy. Appropriately, there’s a sweetness to the film as well, which balances out the heartache that pervades Thomas and Anat’s stories of loss. Even though “The Cakemaker” is a devastating romance about grief, it remains steadfast as a lovely piece of work that never succumbs to misery. Graizer appears to see the humanity in everyone, and it’s a testament to his writing that tensions of religion, sexuality and national identity sprout naturally from the cracks in his dramaturgy. He harvests these buds of conflict to cook up a more holistic story, even if his technique is far from flawless.

Grazier largely sticks to traditional art house technique in his direction. It’s a straightforward approach that’s most rewarding in its simplest form. Many scenes take place in few shots, oftentimes only one or two. However, he draws you so into his performers that you often forget that the camera has not moved. In one pivotal scene, Graizer cuts for the first time to show an intense shift in the dynamic between Thomas and Anat, and it’s a quiet stunner. However, Grazier often leans into heavy-handed zooms, which tells viewers how to feel and sucks the meaty emotion of a scene’s shell. They’re the only technical choices that show his hand, and it’s a hand that overworks his dough into an impenetrable mass. Every scene is carried by his actors, and Graizer is at his best when he allows them to do the heavy lifting.

The actors’ performances are uniformly excellent. Kalkhof is phenomenal as Thomas. He doesn’t talk much, mostly due to his inability to speak Hebrew, but everything is expressed through his deeply emotive face — confusion, conflict, grief. His character is full of secrets, of mysteries that we understand but his co-stars do not, and he carries them within every scene. Adler is also extraordinary as Anat, suffering from much of the same trauma as Thomas. But Anat grapples with the expectations of her loved ones. Thomas is free to start over, with no one holding him back but himself, while Anat is expected to make a living to support her young son Itai (Tamir Ben Yehuda) and to conform to her brother Moti’s (Zohar Shtrauss) strong religious beliefs. Adler imbues her character with all of these pent up anxieties, and they read as strongly on her face as they do on Kalkhof’s. In a way, Thomas and Anat represent two sides of grief: Thomas wallows in it, and Anat represses it. Together they can finally heal, and the fireworks between Kalkhof and Adler are a wonder to behold.

Within the social expectations of Jerusalem, Thomas’ sexuality and Anat’s instinct to bend the rules are met with opposition. They’re both outsiders who are brought together by tragedy, but sadly they cannot even be truthful with each other. “The Cakemaker” finishes on a melancholic note, but with a sprinkle of signature sweetness. Graizer’s film may dip into cliche, but it doesn’t play it safe, and it refuses to leave viewers unfulfilled. The film is like a warm, fresh aroma floating out of a bakery, comforting you but leaving you longing for more.