The burden of resilience and the Kanye West fan 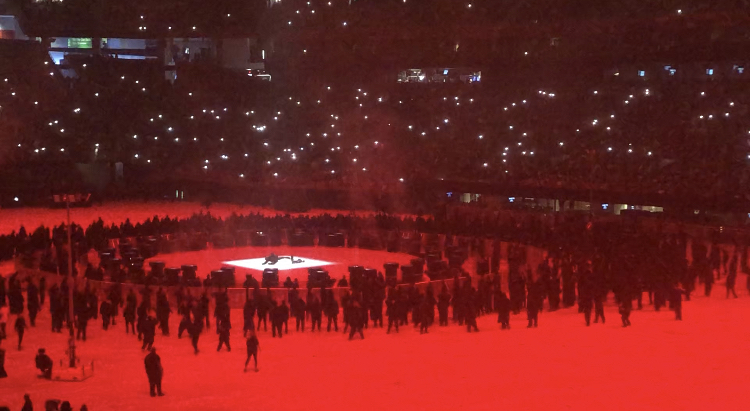 I spent Sept. 28, 2018, telling anyone who would listen about “Yandhi,” a new album by Kanye West that was slated to be released that night at midnight. There was hardly a shortage of Kanye West music at the time either. Just four months prior, West released two albums, a self-titled solo project and a collaborative album with Kid Cudi. The unreleased album’s brazen title positioned the project as a spiritual successor to West’s 2013 album, “Yeezus.” He was also expected to perform tracks from “Yandhi” that night on Saturday Night Live (SNL), where he had a storied history of boundary-pushing performances. The day felt galvanizing simply because I knew that at the end of it, West had new music for me.

Yet, Sept. 29, 2018 was a day of shame. Instead of an album release, fans were treated to West’s worst TV performance to date, which ended in a four-minute rant complete with a MAGA hat and a captive audience of SNL cast members. Although leaked demos later revealed the album’s promising potential, “Yandhi” was quietly delayed to an unspecified release date and has gone relatively unacknowledged by West ever since.

This is just one of the many ways West’s album rollouts can end. In fact, many of West’s album announcements over the last decade have failed to end in an album release. Sometimes, they end with a few good singles. Others, they end with a couple terrible singles. Usually, they end the same way as “Yandhi”: eagerly announced and then quietly delayed until the public discourse eventually subsides.

Annually reliving this cycle of excitement and disappointment did not cause me to distance myself from West and his music, but rather the opposite. On Aug. 5, I found myself in Section 123 of Mercedes Benz Stadium, attending West’s second attempt at a launch party for his reportedly forthcoming tenth album, “Donda.”

I was far from alone. Hordes of 16-year-old boys stood behind hordes of 17-year-old boys in merch lines so long they likely couldn’t see that their coveted drip resembled something you might find at a weird summer camp. I watched as people tried to explain to their dates that this was not a “concert,” it was a “listening party,” and that West would not be performing as much as he would be plugging his phone into the stadium speakers. I listened to groups of strangers going on tangents about the Wyoming sessions or complimenting one another’s Nike Off-White T-shirt collaborations.

The most common matter of discussion was, unsurprisingly, whether or not the album would release at midnight as had been advertised. I remember hearing someone propose a wager of $50 through gulps of ale, with his win condition being that “Donda” would not come out until noon the following day. Two middle-aged women in the row behind me repeatedly expressed their excitement to relisten to the record all night long.

The music itself was lacking. Plenty of the songs were clearly demos, with West muttering gibberish over incomplete instrumentals. At times, the album was nearly incomprehensible due to the sheer amount of rib-rattling bass that seemed to swallow up each track. It hardly mattered. West himself is an event worth marveling at.

Kanye West sits in the middle of Mercedes Benz Stadium surrounded by dancers as he premieres a song tentatively titled “God Breathed on This.” (Emory Wheel/Noah Gentry, Staff Writer)

For an hour and a half, West lurched around a stage designed to resemble cramped living quarters; the very same stage that he roamed unencumbered two weeks ago. Dancers surrounded him, bouncing up and down, marching in circles and crawling on their hands and knees. During the album’s final song, spotlights erupted out of the stadium’s open roof as West ascended into the dark Atlanta sky. As the stage emptied and the lights came up, I remember thinking there was no way the album would come out that night.

I was right. Aug. 6 came and went without a (credible) trace of “Donda.” Updates became more and more sparse until a third listening party was announced for Aug. 26. In a moment of Pavlovian excitement, I felt myself perk up upon reading the announcement. Although I had already heard and been displeased with “Donda,” the possibility of new music from West was still so tantalizing. After years of publicly abandoned projects, I find myself clinging to the hope that “Donda” might one day hit streaming services. To call one of West’s album rollouts a “listening party” is an award-winning understatement. These are displays of ego, celebrity, wealth and talent, punishing in their execution and irresponsible in regards to what they promise. Unfortunately for Kanye West fans, a Kanye West fan never fully abandons hope.

Across the world, people spent Aug. 5 telling anyone who would listen about “Donda.” Those same people likely spent Aug. 6 saying things like, “Apparently, they were still doing last minute tweaks after the event,” or, “A couple guys in Kanye’s circle said it’s coming out at noon.” Even if the release of “Donda” is pushed to an unspecified date, many of those same people will still pay close attention the next time West decides to announce an album he hasn’t made yet, because sometimes — and only sometimes — album parties lead to albums.