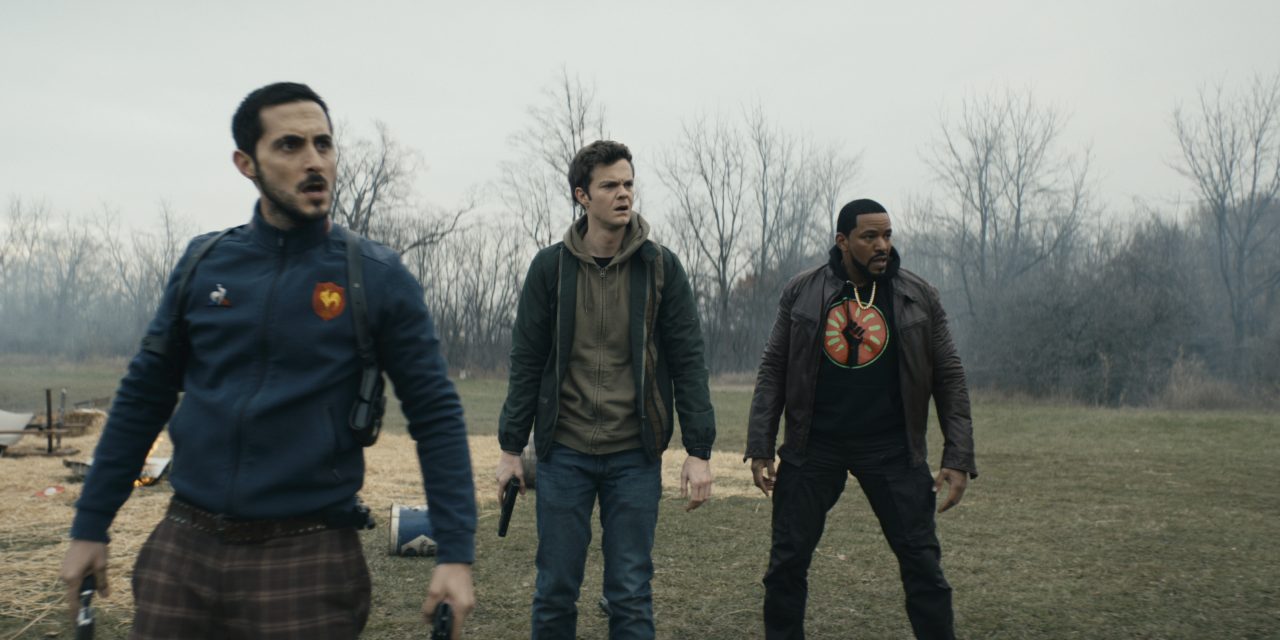 After watching the finale of the series’ second season, I’m under the impression that Amazon Prime Video’s “The Boys” can do no wrong. It’s astounding how many topics the show can cover while still remaining cohesive. Maybe it’s because the show relishes in crude humor and satire that oscillate from discussing neo-Nazism and religious profiteering to impaling a whale with a speedboat in the goriest way possible. Almost every episode brings something memorable to the table that is either shockingly hilarious or simply terrifying, making for a uniquely twisted delight of a show.

From left to right: Frenchie (Tomer Capon), Hughie Campbell (Jack Quaid) and M.M. (Laz Alonso) prepare for a showdown in season two of “The Boys.” / Courtesy of Amazon Studios

In season one, after a famous superhero, or “supe,” killed his girlfriend, Hughie Campbell (Jack Quaid) gets roped into former CIA operative Billy Butcher’s (Karl Urban) personal vendetta against all supes. They’re up against the top superhero group known as The Seven and the sinister “entertainment” company, Vought, that engineers the supes. By the end of the season, Billy and the titular Boys are scattered and the top supes at Vought are left in chaos. This season, The Boys and the supes are back, and everyone has something to lose. Billy and company are desperately trying to get Vought off their backs and expose it for its cruel experiments and the supes’ crimes. Meanwhile, Homelander (Anthony Starr), leader of The Seven, is elated that he has a superpowered son, Ryan (Cameron Crovetti), of his own. However, when a new hero named Stormfront (Aya Cash) joins The Seven and threatens The Boys’ safety and Homelander’s popularity, everyone is left scrambling to survive.

One of the most impressive aspects of “The Boys,” even more than the over-the-top gore and biting satire, is the show’s tendency to let the actors’ performances take over the scene. This was true of season one but more so of season two, especially with the addition of the Vought executive Stan Edgar played by Giancarlo Esposito; a fantastic actor known for his iconic performance or suave antagonist Gus Fring in “Breaking Bad” taking on another chilling villain. Starr’s performance as Homelander is chilling to begin with, both in the quality of his acting and in knowing the extent of Homelander’s powers. However, watching Stan, a man without powers, talk down to Homelander with complete and utter calm is somehow more horrifying and certainly one of the season’s highlights. This is not to undersell Urban’s performance as Butcher, which can be equal parts scary, crazy, lovable, foulmouthed and “bloody diabolical.”

Even the more character-centric scenes shine despite the main plot being the show’s driving force. Each character gets a solid arc this season, from Hughie becoming a more independent character to Kimiko (Karen Fukuhara) and Frenchie (Tomer Capon) having their own tender moments and even to Homelander getting some well-deserved development outside of being a crazy Superman with mommy issues.

While season one’s weakest point was its pacing, season two remedies that issue. Season one came out of the gates with one of the strongest pilots in recent television, followed by some other very compelling episodes. Yet, later episodes struggled to live up to that momentum, and while none of the episodes were disappointing, it felt like a downhill slope by mid-season. Season two maintains more of an inverted bell curve in terms of episode quality, though even that is unfair because the middle episodes are only slightly slower or less interesting than the earlier and later ones. The only episode that was especially weak was episode four, which came a week off the tails of three excellent episodes released simultaneously on the season’s premiere date. This season’s finale is likely the series’ best episode to date, with almost every scene feeling satisfying in some way. I hesitate to describe many of this season’s shining moments, as scenes can be genuinely well-crafted on every level and they should be experienced spoiler-free. Just know that season two of “The Boys” is on top of its game on almost every level.

While superhero satire isn’t necessarily new, “The Boys” has a clear sense of direction in its voice and take on the genre, both of which have been refined in the second season. From blood and guts to twists and turns, season two offers more of everything the show does so well but even better. With Amazon already teasing new cast members and a third season for 2021, it’s great to see that the studio seems dedicated to this delightfully diabolical project.