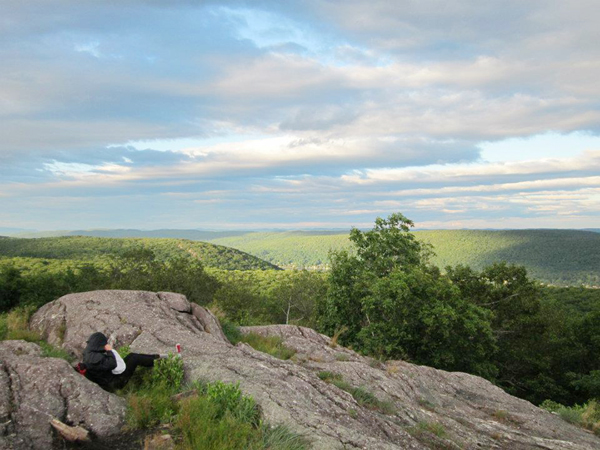 College freshman Jordan Feltes and his two friends had just eagerly started on the Delaware Water Gap, the northern-most point of the Appalachian Trail in Pennsylvania, for their three-and-a-half-week, 210-mile trip. On June 20 of this summer, Feltes had his backpack ready with what the Internet had told him was the proper gear – pop-tarts, beef jerky, dried fruits, water purification and light-weight everything – but no previous experience with hiking.

The first day was 98 degrees with a frustrating amount of humidity on very steep terrain. Feltes was constantly stopping and constantly sweating. Soon enough, the shock made him come to the conclusion that he had to get rid of some of the food, clothing and other non-essentials from his 45-pound backpack.

“I wasn’t used to shutting my mind out and just keep walking,” Feltes said. “I would constantly think about everything that was going on, which would make the miles seem longer.”

Unfortunately, as they found out six miles in, the friends were headed the wrong direction – south instead of north.

“All of that put together made for a really dejecting first day,” Feltes said. “If there was any day I wanted to give in, that’s when it was.”

Disillusioned, they called it a night and camped out in a nearby shelter – or more accurately, a wooden roof with poles. After lying down in his uncomfortable sleeping bag (Feltes soon realized that he was in desperate need of that sleeping pad the hiking books had told him about), he looked straight up at the roof of the shelter.

In Sharpie, he read the written words: “You chose to be here.”

“I think that summed up the entire trip,” Feltes said. “You weren’t forced to be here. There is no reason you are here other the fact that you chose to. So, get the most out of this hike as you can. It’s not about doing as many miles as you can every day, it’s about enjoying the hike and finding the little things that will make it worthwhile.”

Whether those little things were a night’s sleep on park benches in New York City, his pet name “Aladdin” coined by the inspirational thru-hikers (his “substitute family”) he met along the way, or his stealthy escape from a 400-pound adult black bear, Feltes had his fair share of experiences on his first extensive hiking trip.

After the boost of energy Feltes received from the words on the shelter the first night, he hiked through the Kittatinny Mountains. At the top, he looked around himself, and everything in distant view was below him.

“That definitely spurred me to keep going. I had lost a little faith at that point, but that [view] pushed me forward. You wouldn’t think it, but it’s those little views,” Feltes said.

His favorite view was after a 22-mile day (Feltes averaged about 16 miles a day) at Prospect Park with some thru-hikers he had been trekking with the past three or four days. After reaching the peak, they camped out around a fire. Feltes cracked open some Sour-Patch Kids he had saved for that night as the group ate ramen noodles with peanut butter and rice.

But not all days were so rewarding.

According to Feltes, the trip goes from being physically-demanding to mentally-demanding. The first couple weeks were tough because he hadn’t developed his “trail legs” yet. Then, he developed this rhythm and stopped thinking about the physical exhaustion.

“The way they put it, ‘the best part of the trail is when you get home’ and look back on it and realize all those amazing things you’ve done,” Feltes said.

Feltes sees a change in his own character when it comes to his ability to cope with solidarity, independence and hardships.

Looking back, he desires to get back into hiking and do a different part of the Appalachian trail or the Pacific Coast Trail and is joining Outdoor Emory as an outlet for his newfound hobby.