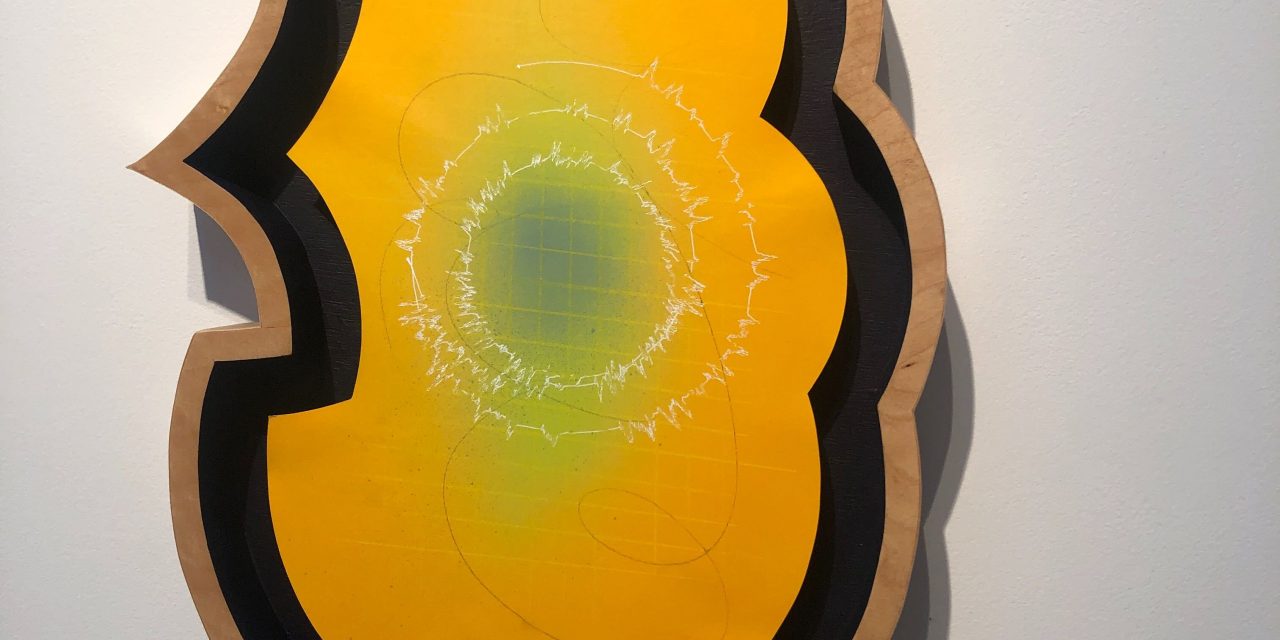 While professors use lectures to demonstrate their expertise to students, they often convey their true virtuosity in creative projects, groundbreaking research, papers and studies outside of the classroom. Visual arts professor Dana Haugaard is no exception. Haugaard is a practicing artist who regularly exhibits his work nationally and locally, and I was lucky to attend a feature exhibition of his work at the Swan Coach House Gallery.

Haugaard recently received the prestigious Edge Award 2021, which the Forward Arts Foundation gives to under-recognized, emerging artists in the Atlanta area each year. As part of the prize package, Haugaard’s works are on display in a solo exhibition entitled “That breeze just keeps blowing over me” at the Swan Coach House Gallery through May 20. The exhibition of nine artworks, though fairly simple in its forms and minimal in its presentation, nevertheless creates an intensely emotional and self-reflective experience for the viewer.

“That breeze just keeps blowing over me” consists of a collection of conceptual portraits that represent how people describe the sense memories that impacted their development. Haugaard used an Audiograph, a machine he built, to translate sound into drawn marks, effectively capturing the sound waves from clips of interviews he conducted. These interviews took place over Zoom with people close to him, particularly those whom he was not physically able to spend time with during the pandemic, like his mother and friends. Haugaard asked subjects to recount stories and memories that impacted their self-formation and the sensory experiences related to those memories. Each interview was an emotional experience, and Haugaard explained that asking his friends and family to participate in these interviews felt very intimate. 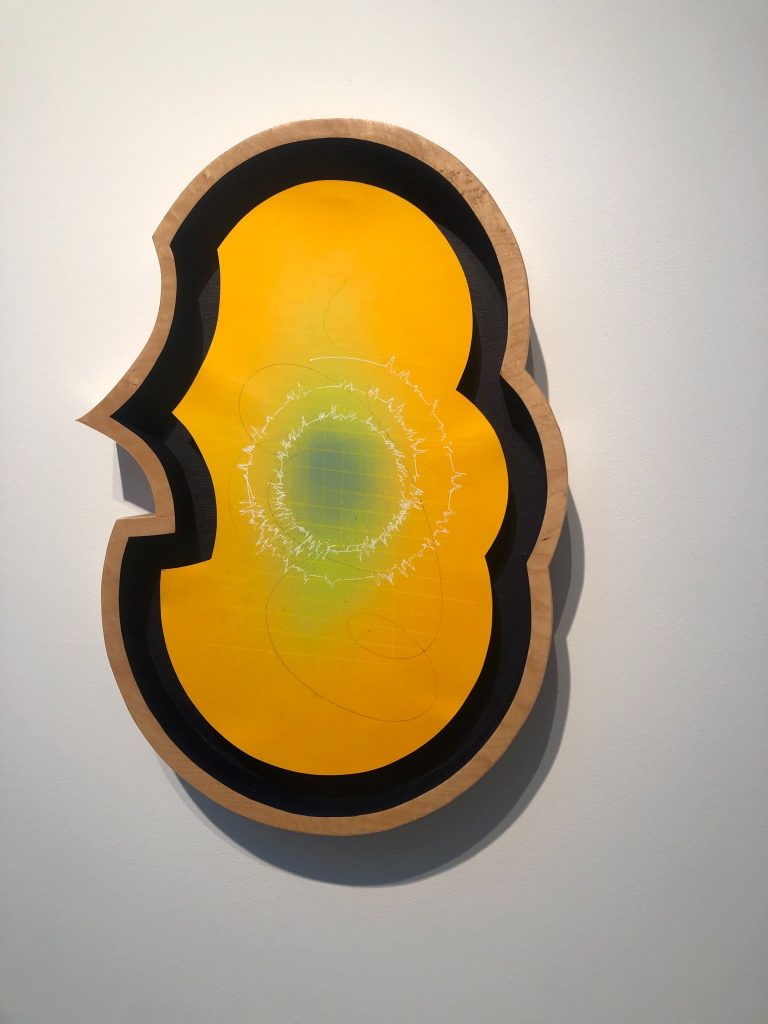 Dana Haugaard, “I felt weightless and like, in love [Lizzy],” 2021. (Emory Wheel/Zimra Chickering)

Unlike the artist, I knew none of the subjects represented in the gallery. Yet, each painting captures the inner workings of their minds and memories in a way that allowed me to better understand them as people. Without ever seeing their faces, these artworks somehow transformed strangers into vulnerable, relatable humans. Both the interview quotes that titled each work and the imagery of the pieces enriched my understanding of the subjects depicted. The artworks created a more detailed illustration of the subjects than could have been achieved with a traditional, realist portrait. His artworks were especially impressive considering that these were some of Haugaard’s first paintings, as he is a sculptor who usually incorporates physical tactile experiences, like vibrations, into his work.

Haugaard describes his use of “sensation and perception to create environments that provoke a heightened sense of awareness of one’s self,” and this fascination with sound and sense is evident in this exhibition. While these artworks are not entirely sculptural, they still create a powerful physical presence, and each canvas seems to embody a certain state of mind.

The relationship between external sensations and internal emotions is quite profound in the different artworks; paintings whose Audiograph inscriptions stand out against the canvas’s background color represent portions of interviews where subjects explained internal reflections, whereas artworks with much fainter Audiographs embody the processing of external events. For example, in “Everything was kinda moldy, but also bright (Sucked into the vortex) [Emily],” the Audiograph inscriptions at the bottom of the canvas are barely visible. Along with the audio inscriptions in this artwork, the sections of color in the canvas also suggest the processing of emotions and memories. The blue spots throughout the composition convey feelings of joy, but they are partially subdued by the diluted browns and greens that surround them. 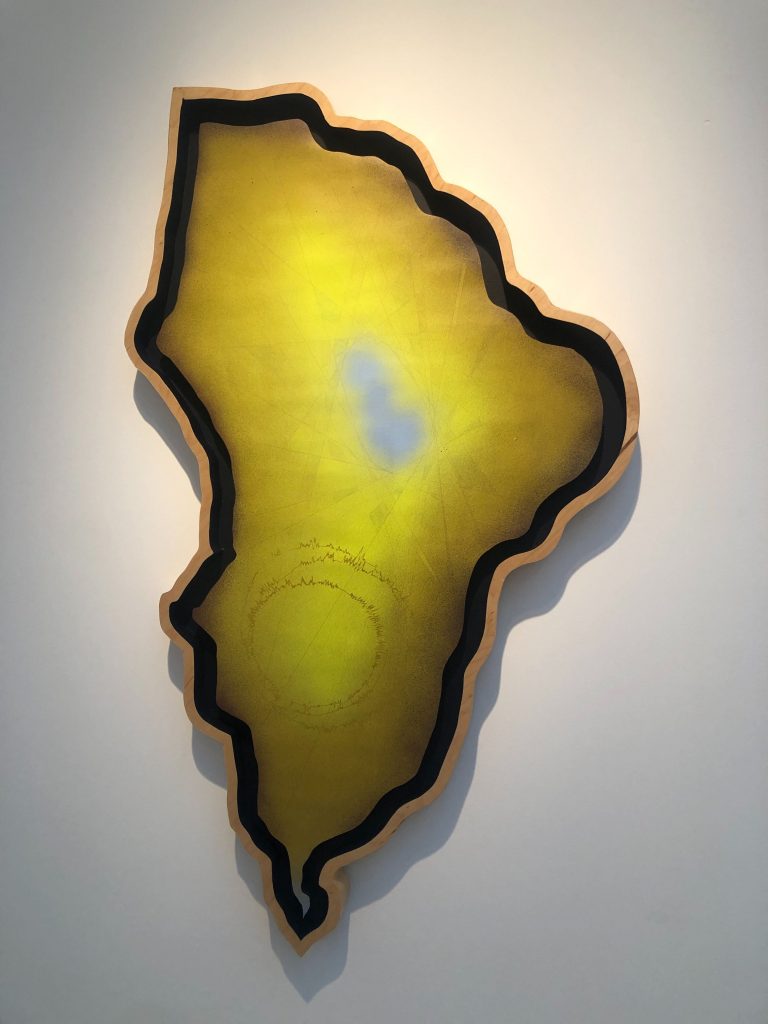 Not only did these artworks require the interviewed subjects to reflect upon their formation of self, but by connecting the ephemeral memory to something physical and permanent, the artist asks the audience to reflect in the same way. After viewing these paintings, I wonder: What memories have shaped me? What sensations flood my nervous system as I picture those experiences? And how are my memories integrated or discarded?

My favorite art is the kind that leaves you with more questions than answers, and this exhibition succeeded in that pursuit; my brain was equally as stimulated as my eyes. I felt lucky that experiencing this exhibition would become one of my memories — one of the sensory experiences I could reflect upon later. In the front of the gallery, Haugaard wrote out certain questions for the audience to consider as they examined the artworks, one of which perfectly captures the ethos of the exhibit and experience of the artworks: “What lives in the quiet moments of remembering that drift in orbits around the longer narrative of our lives?”