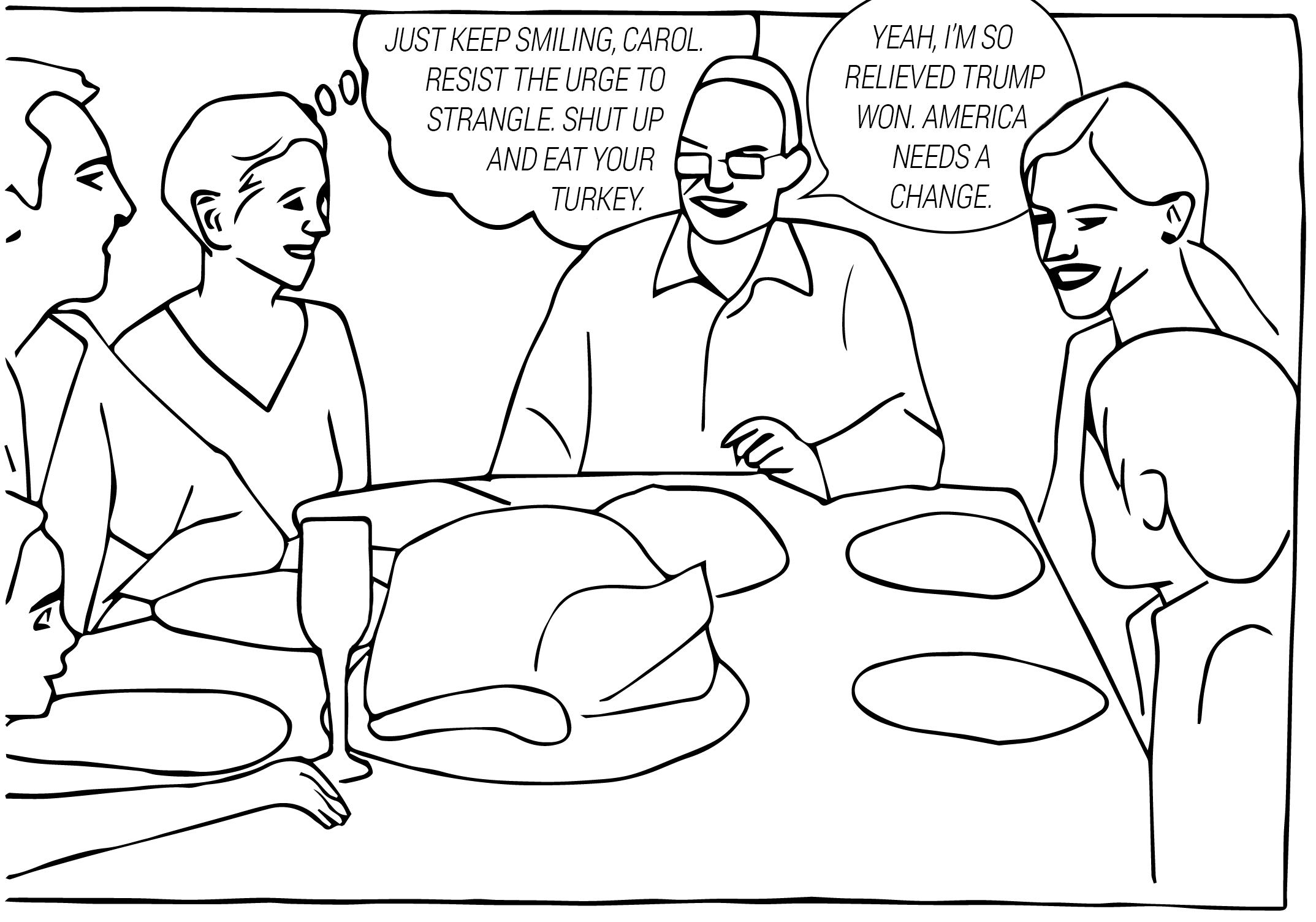 Thanksgiving is one of the most confusing holidays of the year. To the unassuming eye, Thanksgiving is all about America’s humble beginning as a bunch of clueless pilgrims and the kind Native Americans who saved them with a big feast. Because of this, we tell each other what we’re thankful for and eat obscene amounts of turkey, pie and other carbs, as well as watch a lot of football and movies.

The holiday, however, has another connotation for those who frequently attend a family Thanksgiving table. Thanksgiving to us modern-day Americans is full of awkward encounters with drunk family members and loaded questions about our futures and why we haven’t been more successful. Then we sit quietly and ignore each other while movies play and pretend we didn’t just fight about Trump and Hillary again.

While this may sound like an American stereotype generated by the internet and Hollywood movies (and not to mention sitcoms), it is actually quite accurate. Every year, families convene and proceed to harass each other while pretending that everything is O.K. I, for one, was hounded by family friends for not picking a major, despite my vehement retaliations reminding them that I am, in fact, a first-semester freshman.

Many perfectly loving and functional families also fall into the Thanksgiving day curse and use television, movies and sports games to be together as a family with the blissful excuse of not actually having to talk to each other. My family does it! Often we will go to the movie theater after the big meal and rejoice in bonding without talking, a safeguard against accidentally offending each other further (this phenomenon can also be found during Christmas, as well).

While my family uses the big screen, one of the biggest Thanksgiving Day traditions is watching football after the big Thanksgiving meal. Football, as long as everybody is rooting for the same team, of course, is a perfectly easy sport to bond over because it provides plenty of common enemies and topics that don’t involve future professions, potential grandchildren (or lack thereof) and whichever other topics have been tabooed. TV shows offer the same effect. It seems to be that families take joy in watching fictional families hash it out and have their lives go wrong instead of dwelling on one’s own reality, which in most cases is pretty tame compared to the fictional world of movies and TV.

While it can be hilarious fun to watch people annoy each other on TV, if it were a real-life scenario, nobody would think it was funny; that level of annoyance is only fun when it isn’t happening to you, which is why we watch TV instead of talking to annoying family members.

The film and TV industries know this all too well. Thanksgiving movie releases and Christmas movie releases exploit the need to escape to a theater — where silence is golden and grandma can’t yell at you anymore.

TV also takes advantage of those Thanksgiving episodes that highlight the dysfunctionality of every character in a harsher light than in the rest of the episodes.

The only difference is that a TV or movie Thanksgiving, as opposed to a football Thanksgiving, will often end in a big reconciliation with everybody involved, while your drunk uncle will most likely not explain why he is so mean, apologize for hurting your feelings and promise to make it up to you.

Even though family issues are accurately portrayed through TV, it is still idealized so that people will actually choose to watch that instead of experiencing it firsthand. Hey, at least Hollywood and TV have our backs and produce stuff for us to watch while we hide from our families.