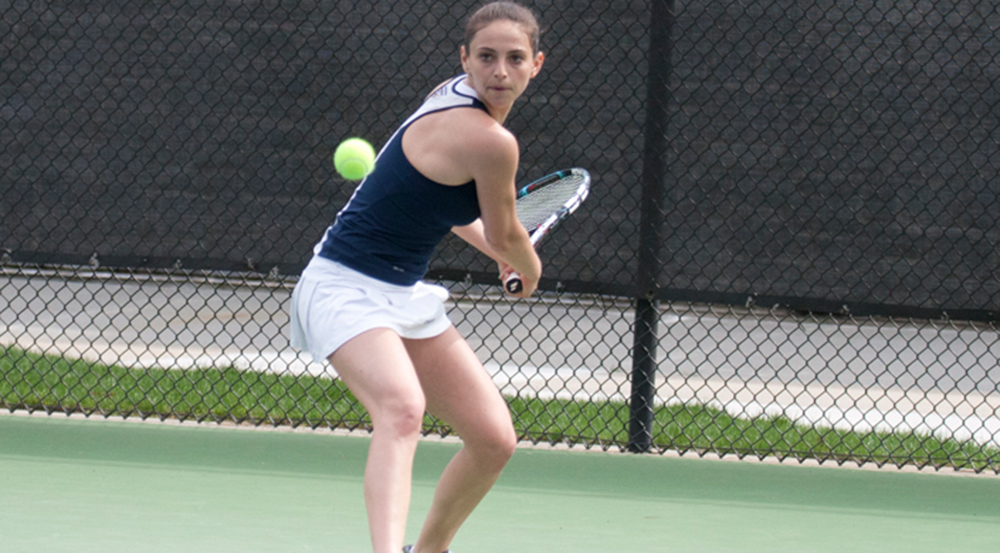 Last Thursday, April 2, the top-ranked Emory women’s tennis team celebrated Senior Day and an 8-1 win against the number 12-ranked Sewanee: The University of the South (Tenn.).

Before the match began, the team honored the three graduating senior athletes: Catharine Harris, Rebecca Siegler and captain Danielle Truitt. The three Eagles have collectively helped the team go 77-16 over the past four seasons, including an NCAA Division III National Championship in 2014 and three straight top-three finishes in the NCAA Division III Tournament.

“[Senior Day] was so special, two of our athletes’ parents were there to celebrate, and it was a memorable ceremony,” Head Coach Amy Bryant said. “All three seniors were able to play in our lineup and they played great.”

Junior Beatrice Rosen explained how important it was for athletes to receive recognition after their four years of hard work.

“It’s a really big deal to be on an intense program, like Emory’s tennis team, and their commitment should be honored by the time they’re seniors,” Rosen said. “We get to know them so much, so it was very emotional to reflect [on] how they’ve changed as players, teammates and friends.”

Due to lightening nearby part way through the doubles competition, the event was moved to indoor courts in the Woodruff Physical Education Center (WoodPEC).

The shift in scenery didn’t change any of the athletes’ playing intensity or attitude, according to Bryant.

The team of freshman Anna Fuhr and sophomore Michelle Satterfield went first, starting off the doubles match with an 8-4 win over Sewanee’s Lindsey Liles and Bronte Goodhue. Goodman and Rosen played second doubles, continuing the winning streak with an 8-0 win over the team of junior Kate Johnston and Clementina Davila. In the third doubles match, Truitt and Siegler fell 8-5 to Sewanee’s Annie Veron and Maggie Crumbliss.

“We already knew we won the match at this point, but after [Harris] won, we all rushed the court,” Bryant said. “It was such a special night to share with each other. Our team is so close, we’re like a family.”

Emory improved their overall record this season to 12-3, while Sewanee dropped to 12-4 after the loss. Emory’s win also marked the 21st-consecutive win at home for the Eagles.

The Eagles have a week off from practice to rest before they will begin preparing for their next games on Tuesday, April 14.

“Throughout the next week, we still have weights and conditioning and will hit the ball in our own time,” Rosen said. “But, it’s a nice, needed break before our next games.”

Rosen explained that the team always gets a week off during the season to give the team a mental break to help prepare for University Athletic Association (UAA) Championships and Nationals.

“Having a week off in our training schedule is really important,” Bryant added. “We need to rest before we start preparing for our upcoming games against Columbus State, which is Division II and Johns Hopkins, which is one of the best in Division III.”