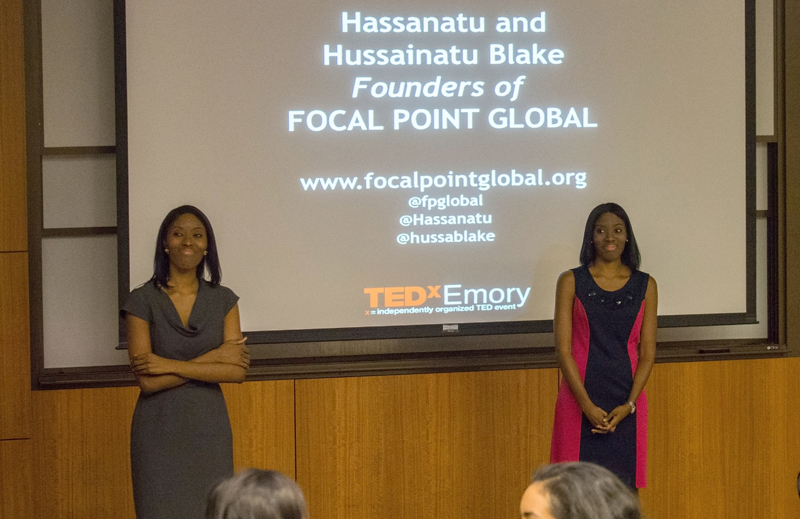 TEDxEmory brought twin sisters Hassanatu (05MPH) and Hussainatu Blake, founders of Focal Point Global and recipients of the White House Champions of Change Award, to Emory on Thursday evening for their first speaker series of the year.

TED is a non-profit organization that fuses components from technology, entertainment and design at conferences around the world to foster innovation and dialogue. TEDxEmory brings people together to share a TED-like experience through self-organized events where live speakers provoke deep discussion, according to the TEDxEmory website.

The sisters were born in Limbe, Cameroon to an American father and Cameroonian mother and raised in Baltimore, Md. Growing up, they traveled to and studied in countries including Jamaica, South Africa and Germany. The sisters said they feel as though they have always been exposed to issues around the world.

“Speaking about education and major issues resonated with TEDx’s tagline of ‘ideas worth spreading,’ so we thought it would be a good event to have,” College sophomore Hannah Grossman said.

Before founding Focal Point Global – a non-profit organization with a mission to educate and empower underserved youth to create social change – the sisters worked separately in southern Africa, where they were exposed to issues surrounding youth living there.

Hassanatu managed an HIV/AIDS program in Namibia and has worked with the National Institute of Health, the Centers for Disease Control and Prevention (CDC) and the U.S. Agency for International Development.

Through her work in South Africa with the Counter-Trafficking Department of the International Organization for Migration, Hussainatu aided African immigrants who were victims of trafficking in Africa.

“I saw strength in these young women, they gave each other strength to get through this horrible incident,” Hussainatu said.

Hassanatu and Hussainatu said they were inspired to take action after seeing a Washington Post headline that read “HIV/AIDS Rate in D.C. Hits 3%”, a rate comparable to some cities in developing countries.

“We were petrified, and we realized that while it’s great to have all of these global experiences, we need to do something to help our own community,” one of the sisters said.

At the event, the sisters discussed projects they have worked on at Focal Point Global. The sisters said they are currently working to start cross-cultural conversations regarding the issues of HIV/AIDS and trafficking in Namibia, Cameroon and the United States, using modern social media tools such as Skype and Google Hangout.

“It was interesting that a single article in the Washington Post inspired them to start a whole organization,” College freshman Ali Galinski said.

According to the sisters, the U.S.-Namibia HIV/AIDS Education Initiative brought together youth from Baltimore and Namibia to discuss the issue of HIV/AIDS and how cultural norms affect it. The participants worked together to come up with projects to take back to their communities, such as HIV/AIDS awareness clubs and campaigns.

The sisters said a Baltimore youth participant told them that learning about their global HIV issue and seeing how it affects different cultures in different ways made them feel more inspired to inform others about this cause.

According to the sisters, the U.S.-Cameroon Child Trafficking Awareness Project gave youth in Atlanta and Cameroon the chance to discuss how culture plays a part in trafficking and why it is an issue. It also gave them the opportunity to speak to survivors their own age who were trafficked into sexual or labor exploitation.

According to the sisters, Focal Point Global worked with a local organization called Street Grace and the Global Welfare Association (GLOWA) in Cameroon to bring youth together to discuss the issue of trafficking.

“I really like how they emphasize how you can work with organizations that already exist,” College junior Rachel Chang said.

Focal Point Global is in the process of planning their next project, which will begin April 2014. It will be their first intra-African project, bringing together Gambian and Namibian students to discuss HIV/AIDS. The sisters said they are especially excited about this project because they see it as an opportunity for Africans to connect with each another, which does not happen a lot.

“Gambia is a Muslim country, and Namibia is a Christian country so that will be a very interesting pairing as well,” Hussainatu said.

Once they’re able to scale up to include about 100 youth participants in their projects, Focal Point Global plans to expand beyond the U.S. and Africa, according to the sisters.

Hassanatu said the most rewarding part of working with Focal Point Global is that she gets to work with and meet amazing people from all around the world who she believes will truly change their communities.

According to the sisters, the primary intention of Focal Point Global is to make sure that young people recognize that they hold the power to influence society and create positive social change in their own communities.