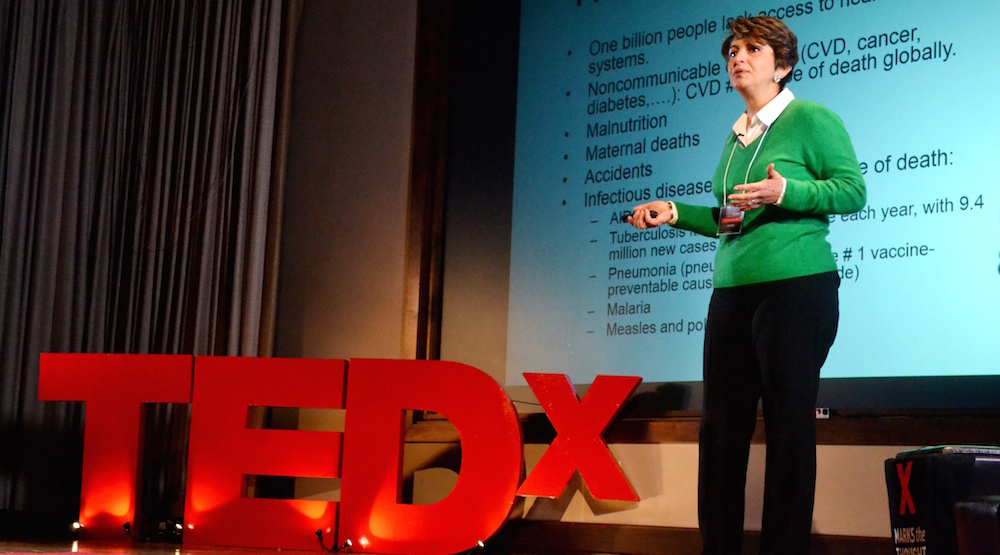 Director of the Division of Bacterial Diseases at the National Center for Immunization and Respiratory Diseases Rana Hajjeh spoke on global health at TEDxEmory this Saturday. Erin Baker / Staff

TEDxEmory organizes the event and is a student-run, independently organized club licensed by TED, a global conference centered on “ideas worth spreading,” that seeks to reproduce the TED experience for the Emory community.

Emory’s TEDx conference has traditionally been held in April, but this year the club’s leaders decided to move up the event in order to avoid possible scheduling conflicts that might have occurred in April. The event was held from 10 a.m. to 7 p.m. on Saturday, Feb. 28.

Since TEDxEmory operates under the guidelines of TED, none of the speakers were paid, even though many were experts or leading figures in their respective fields.
According to TEDxEmory Co-President and College senior Jane Singer, organization members spent nearly a year planning the conference.

“We picked a date last April and just started working from there,” Singer said. “Because it was the 100-year anniversary of Emory in Atlanta, we decided to choose speakers who have impacted those communities.”

The entire TEDxEmory team gathered last spring to compile a list of potential speakers. Over the next few months, they narrowed down the list based on speaker availability and who they thought would deliver the most compelling speeches.

Last fall, the TEDxEmory team finalized its speaker list and began working with them on their presentations while the rest of the TEDxEmory team proceeded with other preparations, such as design, catering and advertising. Saturday’s speakers offered many different messages and stories to the Emory community.

For example, Dr. Jayant Ratti, a robotics engineer and the founder of TechJect Inc., a company that produces miniature drones, described the lessons that engineers can learn from nature when trying to develop better mechanical and robotic systems.

“The mission for us … [is] how can we learn and mimic biology to the point of actually trying to get near the efficiencies that nature has already achieved,” Ratti said. “There’s nothing that goes to waste in nature. It’s optimal.”
Other speakers, like Bhuiyan, dealt with political issues.

“My personal belief … is that all the trouble in the world [comes] from two main sources,” Bhuiyan said. “One is human greed, and the other one is poverty.”

Bhuiyan encouraged students to build a more peaceful world, reduce inequality and promote justice by using their ability to vote in order to elect responsible politicians.

Several of the 13 speakers, such as Staib, talked about art and performance.

“I really loved the interactiveness [of Staib’s presentation],” College senior Orli Berman said. “I’m a dancer, so it was really awesome to see some of my thoughts about dance vocalized in a much more articulate way than I could phrase them … He made dance accessible [even] to people who are not dancers.”

Brown, another Emory professor who spoke about his craft, offered many insights to his artistic philosophy of poetry.

“Poems are [full of] doubt, even at the moment of the line break,” Brown said. “When you get to the end of the line of a poem, you have no idea what’s going to happen … the only thing that takes [you] to the next line is faith.”

Brown also performed three of his own poems, but many students remarked that the entire presentation itself seemed like a poem.

“His stage presence was particularly arresting,” College freshman John Beck said. “The whole presentation was beautiful to watch. You became transfixed with every single word, just waiting to hear the next sentence … the next phrase. It was so mesmerizing and fresh.”

Although most speakers at the TEDx conference are professionals, TEDxEmory also hosts a student speaker competition each year. This year’s winner was College junior Brian Zhao.

Singer explained that there were between 30 and 40 applications for the speaking job. TEDxEmory narrowed down the candidates in different rounds until there were only six left, and all six presented their entire speeches in front of the group.

“We chose Brian Zhao because we thought he had a really fantastic idea,” Singer said.

Zhao used his graphic design experience and his neuroscience background to show the importance of creating attractive data displays that will appeal to the viewer and facilitate the learning process. Zhao explained different methods of presenting information and displayed examples of his own work.

“[Zhao] embodied what I believe to be the essence of TED, the most of anyone who [spoke],” Berman said. “He best demonstrated his passions and the ideas that arose from them.”

The audience consisted of mostly Emory students and professors, but students from other institutions, including Georgia Institute of Technology and Georgia State University, attended as well. As for why the event is thriving in its fifth year, College senior and TEDxEmory Co-President Ariella Iancu thought the conference created an outlet outside of class for students.

“Emory is a very intellectual campus, but sometimes we get overwhelmed with grades and GPA[s],” she said. “This is a great way to learn from [individuals] in the community in a more relaxed environment and to continue to have conversations that Emory students love to have without the stress of grades.”

TEDxEmory will be hosting its next event, “Ideathon,” from April 10-12, which will focus on ​connecting students and challenging them in competition against each other to invent the best solutions to real world problems.