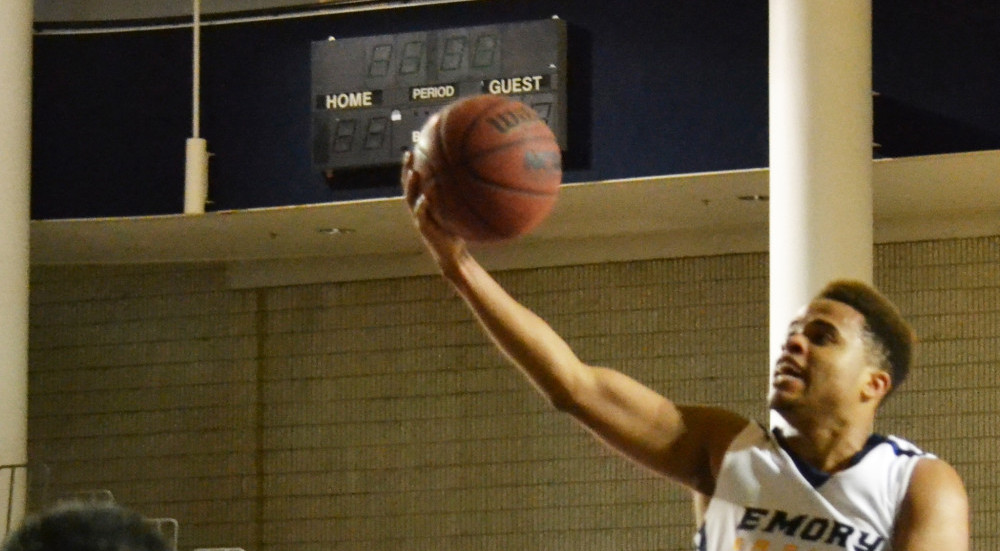 Sophomore guard Jonathan Terry goes for a layup. Terry and the Eagles defeated both of their opponents over the weekend. | Erin Baker/Staff

The Eagles won both games, earning them a shot at the NCAA Division III Championships.

On Friday, Feb. 13, the Eagles took on the Washington University Bears. In what was once again a high scoring affair, the Eagles pulled out a 93-87 win at home after losing to the Bears at their previous matchup in St. Louis. Both teams battled during an extremely intense and physical first half that included six ties and eight lead changes. The Eagles were focused on both ends of the floor and prevented the Bears from getting into their comfort zone and taking control of the game. The Bears led by five with under three minutes to go before an 11-0 run by the Eagles put Emory up 45-40 at the half and ahead for good. As usual, the Eagles were very aggressive on defense. Senior forward Josh Schattie led that defensive effort with four of Emory’s eight steals in the first half.

The Eagles were locked in from behind the three point line in the first half, burying seven threes, including four by junior forward Davis Rao, who led all scorers in the first half with 18.

“Getting such a big contribution from [Rao] gave us a nice cushion and it forced the defense to alter their game plan,” senior forward and captain Alex Foster said.

Foster, the team’s leading scorer this season, was scoreless in the first half and benched after picking up two personal fouls. The strong play from teammates like Rao forced the Bears’ defense to shift their focus away from Foster. Once he was back in after half time, Foster found more opportunities to score as he poured in 18 points, leading the way in the second half.

Foster credited his scoring outburst to the play of his teammates, senior guard and captain Mike Florin.

“[Florin] is so good at finding the holes in the defense and he was able to put me in positions to score,” Foster said.

The Eagles never trailed in the second half and continued to get help from other places, including from sophomore guard Jonathan Terry who contributed 10 points and four rebounds in the half.

A layup by Terry with 15 minutes remaining gave the Eagles a 14-point lead, the largest of the night. However, the Bears kept up their effort and briefly fought their way back into the game after a layup from WashU junior forward and captain Nick Burt cut the deficit to 70-74 with six minutes and 19 seconds remaining. After a flagrant foul was called on the Bears, Rao hit both free throws and junior forward Will Trawick followed with a layup that put the Eagles ahead by eight.

Foster scored eight of the team’s final 15 points and the Eagles made 16 of their 18 free throw attempts in the second half, as they continued to get stops on defense and hold off the Bears.

Rao led all scorers with 27 points on an efficient 8-11 shooting, Florin added 11 points and dished out eight assists, and Terry contributed 16 points and nine rebounds off the bench.

Schattie contributed in all areas with four rebounds, three assists and five steals to go along with six points.

On Sunday, the Eagles continued their quest for first place, taking on the Chicago Maroons.

Coming into the weekend, the Eagles were in a four-way tie for second place in the UAA, but Sunday’s victory would put them in a tie with Chicago for first place. Both teams struggled early on, turning the ball over and unable to find a rhythm offensively. Forced shots by both teams led to a fast-paced and sloppy play in what was a very gritty first half.

In an exciting sequence of events, Schattie followed up his basket with a steal and an impressive finish off a spin move. Another steal came from sophomore forward Austin DaGue, who put in a layup off an assist from freshman guard Whit Rapp. Back-to-back three pointers by Chicago junior forward Alex Voss tied the game at 17.

A three pointer from Foster with 7:22 remaining put the Eagles ahead 28-21, the largest lead up to that point. Both teams began to establish some consistency on offense and continued to trade baskets for most of four minutes. With just over three minutes to go, Rapp knocked down a three pointer that gave Emory a nine-point advantage, the largest lead of the half.

Maroon guard Jordan Smith threw down a ferocious two-handed dunk with 1:11 left that made it a two-point game. However, Florin answered with three points, putting the Eagles ahead 42-37 going into the half.

In the second half, Smith continued to shoot well from beyond the arc, knocking down two three-pointers early on. A pair of free throws by Chicago sophomore forward Waller Perez tied the score at 51 with just over 15 minutes remaining.

Following the bucket, Terry entered the game for the Eagles and provided an immediate spark off the bench with a put back layup that gave the Eagles the lead, a rebound and a monster block all within his first 90 seconds.

The Eagles continued their aggressive defense and forced turnovers with steals from Schattie and Terry.

A second block by Terry, this one even bigger, made the crowd erupt and the energy fueled a 19-2 run in a collective effort from the Eagles that put them up 77-58. The Eagles held their largest lead after a layup by Schattie with 7:40 remaining in the half extended their lead to 21.

Head Coach Jason Zimmerman emphasized that his team played with a great sense of purpose and with extra drive, with 15 men motivated by the opportunity to take a share of first place in the UAA following a win.

However, the Maroons began to mount a comeback and narrowed the gap to 83-76 with just over a minute remaining. However, the Eagles were able to hold off the Maroons and come away with an 85-82 win.

“We showed tonight what we’re capable of and what happens when we play to our full potential” Foster said.

After two big wins, both Zimmerman and Foster expressed their confidence looking ahead to the postseason.

If the team continues this level of play, they have potential to win a conference title and a deep run in the NCAA Division III tournament, they said.

“Winning the league is one of our goals,” Zimmerman said. With three big games left, the Eagles need to “take it one game a time.”

The next game for the Eagles will be away against Case Western Reserve University (Ohio) on Friday, Feb. 20, at 8 p.m.​