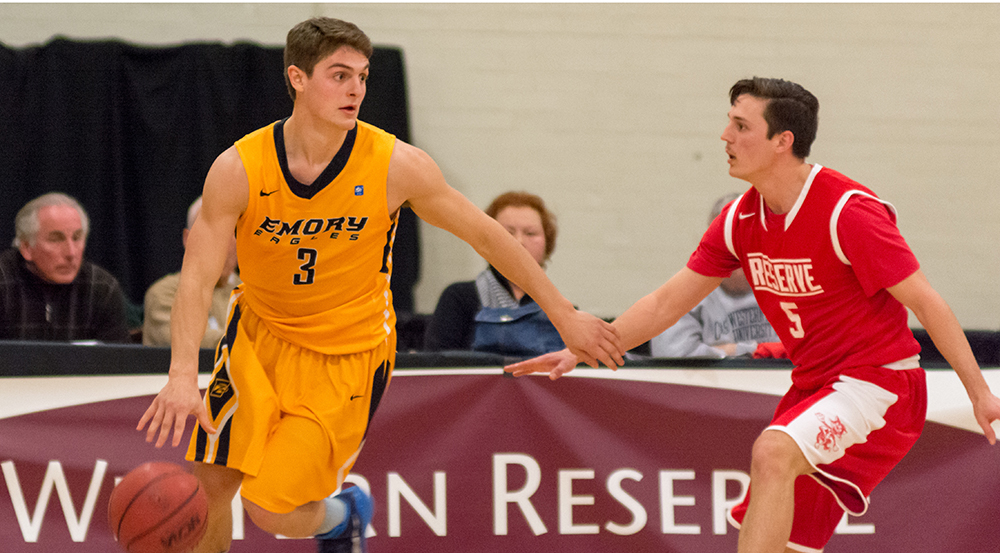 Senior guard and captain Mike Florin dribbles the ball away from a Case Western Reserve University (Ohio) player. Florin and the Eagles defeated both Case Western and Carnegie Mellon University (Pa.) this past Friday and Sunday. | Courtesy of Andrew Hodowanec/The Case Western Observer.

The men’s basketball team defeated two University Athletic Association (UAA) opponents this weekend. The Eagles beat the Case Western Reserve (Ohio) Spartans 71-65 and the Carnegie Mellon University (Pa.) Tartans 75-63. With the wins, the Eagles clinched at least a share of the UAA title.

The Eagles played their first game of the weekend against Case Western. Emory made the scoreboard first with a three-pointer by junior forward Will Trawick. Senior guard and captain Mike Florin led the way with 14 points, and the Eagles held a four-point lead at the half. The Spartans struggled shooting in the first half, making only 29.7 percent of their shots, but they were able to keep the score close thanks to 12 points from senior forward Dane McLoughlin, who contributed three three-pointers. The Spartans continued to keep the game close, and with seven minutes remaining they took their first lead of the game off another three pointer by McLoughlin. Over the next six minutes, both teams traded baskets, and the Eagles retook the lead when senior forward Alex Foster buried a deep three-pointer over two Spartan defenders to give the Eagles a 65-62 lead with 41 seconds left. Trawick sank five of his six free throw attempts in the final minute and the Eagles held on to win 71-65.

“We really stepped up late and made some big shots and knocked down our free throws,” Florin said of his team’s ability to hold the lead down the stretch.

“This game was a grinder, and we didn’t play that great offensively, but we just kept our head up and stuck to our gameplan,” Foster said.

On Sunday, the Eagles traveled to Pittsburgh to take on Carnegie Mellon in a game with significant repercussions for both teams. Emory needed a win to guarantee them at least a share of the UAA title, while Sunday’s match would be the final home game for the Tartans’ four seniors.

The Eagles started off strong, hitting four of their first five shots as they established an eight point lead early on. From the beginning, it was clear that it was going to be a very physical game, and a gritty first half included a lot of pushing, shoving and flying elbows. However, much of the contact went uncalled, which would prove to play into Emory’s favor. Carnegie Mellon was sluggish from the opening tip, as sloppy passes and careless errors resulted in 13 turnovers in the first half. The Eagles struggled shooting-wise in the first half, making only 30.8 percent of their shots, but the team was able to maintain the lead by playing their usual aggressive defense and using the fairly loose officiating to capitalize on their size and strength advantages.

The Tartans shot 46 percent from the field, but the Eagles’ full court press on defense caused a lot of problems for the Tartans. The Eagles’ active hands led to countless deflections and seven steals, including three by Florin. A three pointer by junior guard Davis Rao with 4:15 left in the game put the Eagles up 30-20, their largest lead of the half. However, the Tartans went on a 9-0 run, narrowing the gap to 30-29 at the half.

The Eagles’ scoring was evenly distributed, with each starter contributing four to six points in the first half. The Eagles grabbed 10 offensive rebounds and attempted 13 more shots than Tartans, but led by only one at the half. Senior guard Seth Cordts led Tartans scorers with 11.

Carnegie Mellon opened the second half with a basket to put the Tartans ahead 31-30, their first lead of the game. Trawick answered with a three-pointer to put Emory ahead 33-31. Both teams traded baskets over the next five minutes, a span which included five lead changes and three ties. After a 7-0 run, the Tartans held their largest lead of the game, with just under 14 minutes remaining. A three pointer by Terry brought the Eagles within one, ending the Tartans’ run. Both teams battled for control of the lead while the Eagles continued to exploit the Tartans’ inability to break the full court press, coming up with five more steals. Emotions were flying on both sides, as the physical play kept up in the second half, but the Eagles were unfazed and continued to play with poise and control.

“We kept our composure and powered through and didn’t let anything bother us,” Foster said.

With the Eagles trailing 51-52 and just over nine minutes remaining, Florin converted a three-point play, retaking the lead for Eagles, which they would hold for the rest of the game. Four consecutive three-pointers by the Eagles, including three by Rao, extended the lead to nine with just over six minutes to play. The Tartans struggled from behind the three point line and were unable to answer back, ultimately losing to the Eagles 63-75.

The Eagles used 17 free throws and eight three-pointers to pull away in the second half, despite shooting only 34.9 percent from the field and making two fewer field goals than the Tartans. Rao finished with 17 points, to lead the Eagles, Florin contributed 13 points, five rebounds, five assists and three steals and Terry added 11 points, five rebounds, three assists and four steals.

Head Coach Jason Zimmerman emphasized how proud he was in his team’s performance in the last two games.

“It was a tough weekend and we really proved what we’re made of,” Zimmerman said.

Zimmerman also praised his team’s maturity over the course of the season.

“We started off 1-2 in our first three league games and to come back and win at least a share of the division really shows our growth as a team,” he said.

The Eagles take on the University of Rochester (N.Y.) on Saturday at the WoodPec at 12 p.m. with a chance to win the league outright and guarantee a spot in the NCAA Men’s Division III Tournament.