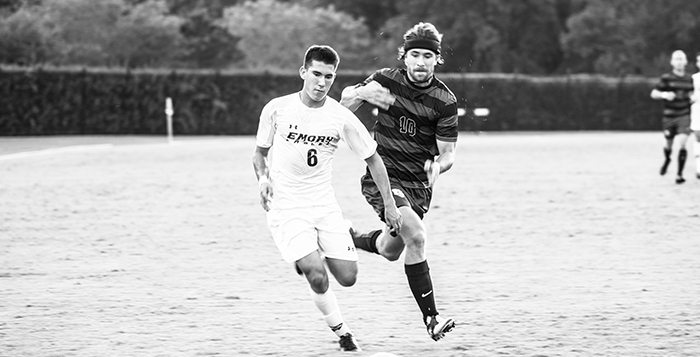 The Emory men’s soccer team continued their hot stretch this season with a 5-1 win over Rhodes College (Tenn.) on Saturday.

The team took a long 9-hour bus ride to get to the Warrior Classic in Hendrix, Arkansas. Although many Emory fans were not in attendance in Hendrix, the Eagles remained eager to compete.

“It’s not easy to travel 9 hours by bus and prepare for a game the next day,” junior co-captain Matt Sherr said. “With hard work and dedication by each and every player, we were able to overcome that obstacle and come out strong the next day.”

The Eagles offense was rolling against Rhodes. The first goal for the Eagles came only 11 minutes into the game off sophomore forward Jason Andrejchak. Soon after his first goal, Andrejchak collected his first assist by producing a beautiful pass to junior forward Sebastian Hardington. Hardington took advantage of the setup and completed the scoring try.

“Jason was outstanding on the day,” Head Coach Sonny Travis said. “I was happy that the scoring was spread out with five different players scoring. I thought Seb had another strong match.”

However, the Eagles blew the game open in the second half. Scoring the third goal for the team in the 55th minute, junior midfielder Nick Schook’s goal brought the momentum back in favor of the Eagles.

Later in the game, Sherr and sophomore Eli Curtin scored additional goals to solidify a blue and gold victory.

Schook was satisfied with the way the Eagles played in the game.

“I thought the depth of our bench really showed in yesterday’s match, which will be very helpful as we get later on in the season,” he said.

Credit is also owed to the Emory defense, which only allowed a total of five shots on goal throughout the entire game. Captains Noah Rosen and Sherr led the defensive effort.

Goalie Abe Hannigan played another successful game in net, saving four out of five shots fired at him.

Travis was very pleased with the result of the game and is optimistic regarding the remainder of the season.

“I expect that we continue to get better as a team each half and each game,” he said.

In their second game and final game in the tournament, the Eagles defeated Hendrix College (Ariz.) 3-0.

The Eagles return to action Saturday Sept. 20 at Berry College.