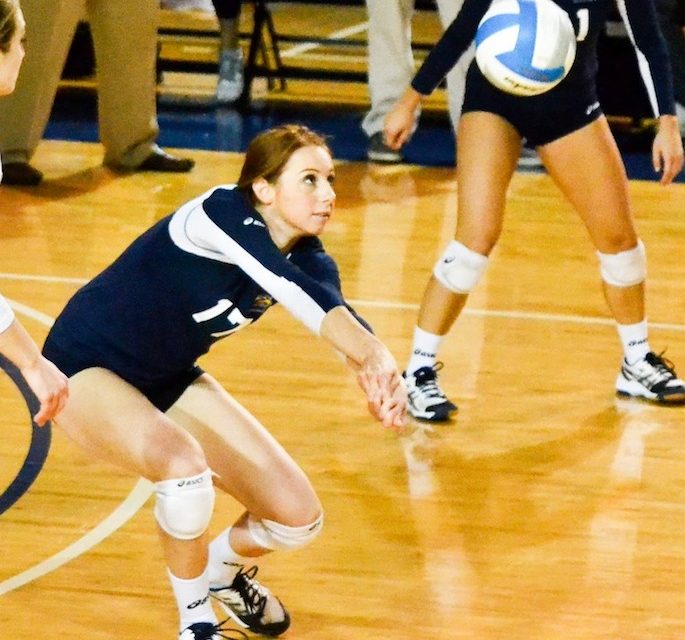 Sophomore outside hitter Sheridan Rice hits the ball. Rice and the Eagles are now 31-3 on the season. | Photo by Erin Baker, Staff Photographer

The volleyball team concluded their regular season this weekend by winning all three of their matches at the Emory Invitational, with 3-0 wins against Berry College (Ga.) and Washington and Lee University (Va.) and a 3-1 defeat of the University of Massachusetts Boston (UMass Boston).

With the postseason rapidly approaching, the Washington and Lee game was especially important, as they are the second-ranked team in the Southern region, behind Emory.

Head Coach Jenny McDowell was pleased with the effort of the entire team, but stressed the importance of the team’s defensive unit.

“[Our defense] is the difference-maker right now,” she said. “They are hitting their stride and playing their best.”

“An opposing coach told me how impressive the defense has been,” she said.

Senior outside hitter Leah Jacobs was happy with the team’s performances and especially impressed by its focus. For Jacobs, the team’s attitude is one of its greatest strengths.

“One thing we always talk about is playing on our side and worrying only about what we’re doing,” Jacobs said. “UMass Boston did some different things, but we did a good job of remaining calm and focusing on what we’re doing as a team.”

The Invitational brought the Eagles’ record to 31-3 on the season. As the Eagles strive for a National Championship title, they will need to maintain that mentality, McDowell said.

“I just think our team needs to stay confident and keep the attitude we’ve had for the entire season,” she said. “Losses have not fazed us. [They] have been annoying and frustrating, but the team does a good job bouncing back after any kind of loss.”

McDowell is optimistic about the way the rest of the season will play out.

“Our goal is always to win the UAA and National Championships,” she said. “We’re going to take it one match at a time and really enjoy the journey together. This is a very tight-knit team that has worked extremely hard. We want to play our best in November and that is what we do. I think our best volleyball is ahead and we are peaking at the right time.”

The strong team spirit mentioned by McDowell is one of the team’s biggest strengths and also something that Jacobs feels separates the team from previous seasons.

“One thing I’ve felt that is different [from previous seasons] is our confidence in each other and belief that we can do this as a team,” Jacobs said. “We have such a positive attitude, which is hugely important moving forward.”

Aside from concluding the team’s regular season, these matches were the last opportunity for Cat McGrath, Bowden, Volarich and Jacobs, the team’s seniors, to play at Emory unless the Eagles host a regional competition. While she hopes Emory is able to host regionals, Jacobs was pleased with how her senior night went.

“[Coach] Jenny [McDowell] does a phenomenal job of making seniors feel special,” she said. “It was great to end our time on our home court right. I felt so incredibly blessed to be on a team that cares so much, it was the best way to go out.”

The trio of wins bumped the team’s record up to 31-3. This season marks the 16th time in McDowell’s 19-year tenure that her team has won at least 30 games.

McDowell said that the biggest ingredient to her success has been recruiting the “right” type of players.

“When we recruit we go for [student-athletes with] high character, integrity and complete selflessness,” she said. “If we focus on those things in recruiting, then everything takes care of itself.”

The team’s journey towards a National Championship continues this weekend in Pittsburgh at the University Athletic Association Championships.